With more events running into time issues, I thought I should resurrect an idea I had many years ago for reducing the frequency of tiebreakers. Both the 4-2-1-0 and 3-2-1-0 formats lend themselves to 2 different kinds of ties. The first is when two or more players have identical records for all three games, e.g. each has a 1st, a 3rd and a 4th. The second kind is when players have different records but due to the point values come out equal. In the 4-2-1-0 version, this could be when player A goes 1st-4th-4th and player B goes 4th-2nd-2nd, each receiving 4 points total. This version can even be 3-way with different records if player C goes 2nd-3rd-3rd to also get 4 points. (Player D would then have 9 with 3rd-1st-1st.) In the 3-2-1-0 version, this could be player E going 2nd-3rd-4th while player F goes 1st-4th-4th, both ending up at 3 points. With a minor change in point values, those second types of ties with different records but the same point values can be eliminated.

With many tournaments now having 3 (12 or 16 players), 4 (24 or 32) or even 5 (40+ players) rounds of playoffs, there’s opportunity to shave a good amount of time off a long event this way. Having just run an event with tiebreakers and that ran late more than one night, I think it’s time to try this.

I love it! My only concern would be… would it make the overall tournament run faster if all i takes is one group to run into one of the other types of “unavoidable” ties? What if we used your new scoring system and then on top of that tournament directors could use the Nuclear Option: Euro-style qualifying-based automatic tie breakers!

If there’s a tie between 2 players in a 3 game tie, I prefer using a straight head to head count back match up to split them - this is then guaranteed to produce a result without the need for additional calculations.

Edit: added the count back to clarify that no further games need be played.

In a nutshell the proposed system is trying to increase the value of 2nd place over the current PAPA scoring system.

Not that it solves the tie problem, but there is some psychological aspect to the scoring setups as well.

4-2-1-0 already feels painful when you are the player with the goose egg after game one. (It doesn’t matter who the fantasy 4 super-elite group is, somebody is getting a zero on game one). Linear systems such as 3-2-1-0 or 4-3-2-1 don’t seem as bad when you are trying to catch up, but yes, they offer more chances for ties across 3 games.

16 points for 1st and 0 for 4th just seems worse, although the 4 values are all scaled by a factor of 4 with the exception of the second place finish which was increased.

If time is the factor in larger tourneys, (or any tourney) there are certainly some easier tiebreak solutions, such as using the qualifying seeding to remove the tiebreak. Please note, I am not saying that is a better solution than adjusting the values or even a good solution, but it is faster than having to play another game and everyone would know that their qualifying position could have more implications other than driving the bus.

If there’s a tie between 2 players in a 3 game tie, I prefer using a straight head to head count back match up to split them

Signal boosting this. If you want to eliminate ties, do this.

At the same time, I don’t see tiebreakers as something I want to eliminate. They are super exciting to watch, they make for good pinball.

If there’s a tie between 2 players in a 3 game tie, I prefer using a straight head to head count back match up to split them - this is then guaranteed to produce a result without the need for additional calculations.

This is what we do for non-bubble tiebreakers for the IFPA WC. We copied that from the BIG10 conference tie breaker procedures.

While we enjoy doing that for non-bubble tiebreakers, we’ve never supported anything besides a playoff for bubble ties/elimination situations. There is no tiebreaking procedure available that won’t have the player eliminated not feeling like absolute shit. We build those tiebreaker rounds into our schedule and would never consider changing that. 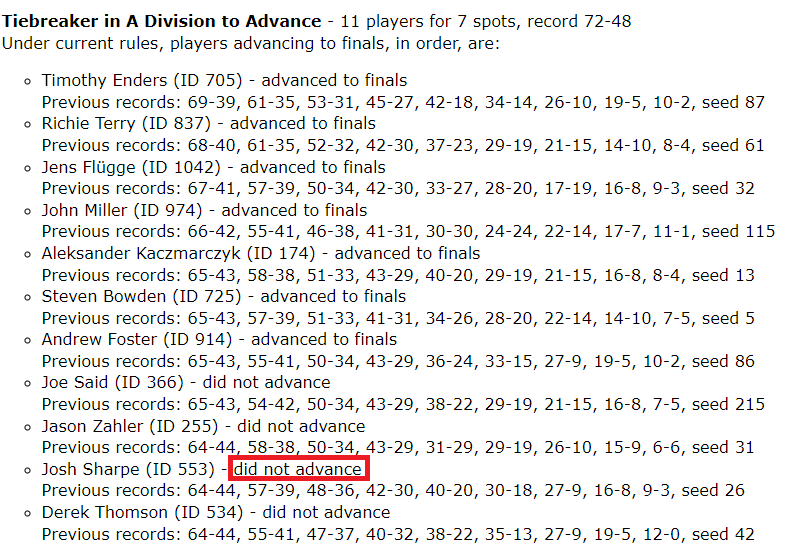 raw score across all machines

games have to big of an scoreing gap for that to work.

If there’s a tie between 2 players in a 3 game tie, I prefer using a straight head to head count back match up to split them

Just to confirm my understanding, this method values the last game played (3rd game of the 3) as having more weight than the 2nd or 1st. Outside of the rare tie in scores on game 3, whoever has performed better between the tied players on game 3 is the player that advances, correct?

Interesting concept for eliminating tiebreakers. Though I tend to side with @pinwizj of never wanting such tiebreaker to be used on whether players get eliminated.

games have to big of an scoreing gap for that to work.

That was a joke because that’s how it used to be done. 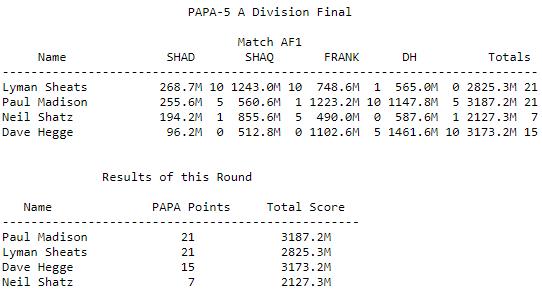 An equivalent way to view my scheme is 3-2-1-0 scoring but with the tiebreaker for non-identical 3-game records being most #1’s, then most #2s, e.g. 1st, 3rd and 4th beats 2nd, 2nd and 4th. Players with identical records are the only ones who still play a tiebreaker.

Josh, re the “total score”, or PAPA 6 in Las Vegas with Starship Troopers vs. Scared Stiff and Junkyard?

Josh, re the “total score”, or PAPA 6 in Las Vegas with Starship Troopers vs. Scared Stiff and Junkyard?

They did “Starship Troopers divided by 4” in that group . . . for reasons my dad still can’t explain

imagine if the games were Attack From Mars, NBA Fastbreak, High Hand, and Meteor

I agree completely with those that believe elimination and significant bubble tiebreakers should be run as a match and not be broken via previous match records. Tiebreakers for seeding, sure, but if I’m at risk of being eliminated in the current round I want to be measured directly against my opponents, not how they (or I) performed in previous rounds against different players.

so you would be in favor to get same round tie breaker based on position in this round, 4/1/0 winning tie breaker against a 2/2/1 for example (most number of 1st, then 2nd…)?

Yes, I would prefer running the tiebreaker. If you don’t, the points system loses relevance.

I’m really not a fan of this kind of idea, or the way Pinburgh did it either.

5 points is 5 points, and it shouldn’t matter what combination of finishing positions you had to arrive at that total. Calling 4/1/0 “better” than 2/2/1 is completely subjective to how you look at those two performances. Avoiding a last place could be considered a better performance than getting a win. I know I would be salty if I had the 2/2/1, beating the 4/1/0 player on 2 of the 3 games, but they advanced over me because greater importance was placed on their lone 4.

If time is expected to be an issue, I think it’s fine to limit tiebreaker machine selections to shorter playing games, but ties to advance should always be played off. It’s exciting and it’s fair. If time is really that much of a factor, it’s worth looking closely at the format to figure out why. Too many concurrent events happening? Pushing the format too far to reach 100% TGP? Starting too late in the day? Those are the issues that should be examined and tweaked before adding weird rules to nix tiebreaker games.

Edit to add: I like the concept of 16-9-4-0 to reduce the possibility for ties, but when they do occur, play them out.

I wrote a script years ago for determining the proportion of possible outcomes that would result in ties for various scoring methods. Ran Bob scoring through it and here are the results. Looks like it does indeed result in pretty substantial reductions in ties.

Note: I quickly wrote this many years ago, so no guarantees on the results.