Hello Everyone!
I’m not sure if anyone has ran this format before or can see any red flags in doing so? Thanks!

In short as you can see below the Top 16 are broken into 4 groups ala papa finals but the groups are ladders with the high seed having choice of game or position. Each round a player is eliminated and when each group has 1 player left they converge into a final group of 4. 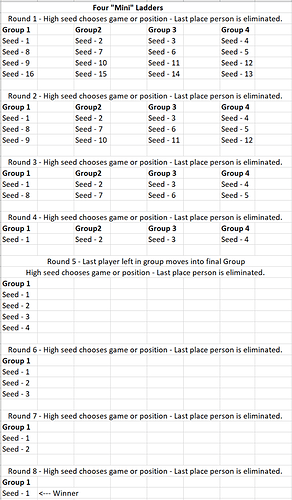 This is one format that screams for the “can’t pick the same game twice throughout playoffs” rule. With that proviso, it’s fine. I’ve seen it once, just can’t recall when.

I kind of like this concept for a tournament where time is an issue. You can still have 16 qualify but not be stuck with three 1.5-2 hour rounds. I bet this would take about 2 hours tops.

Keep in mind your playoffs TGP is going to take a hit, but if your qualifying portion takes care of the games played, then it shouldn’t be a big deal.

I plan to have a 10 Round group match-play qualifying IFPA scoring. thanks for the feedback so far.

That works out perfectly then. I’ll be curious to hear what the player experience is like.

So TGP wize, would it be actual game played?

That’s how I figured it, yeah

This isn’t really “ladder” … more accurately a survivor format. Because you’r’e trying not to get eliminated, and you don’t have better-qualifying seeds joining the ladder matches after a number of worse-qualifying seeds have already survived.

Nearly this exact format was used in at least one tourney in TX a number of years ago (I believe Houston Expo, before @spraynard took over running the Space City Open there). Yes, it saves time, but it was not very popular. I wasn’t attending – I only heard the stories.

Generally speaking, you don’t want to spend a relatively long time, over the course of MANY games qualifying for a finals, only to be one-and-done – particularly for those that earned top/best seeds. So it depends on what type of games that could be used for the potential one-game-and-done finals. In the example I’m referencing, some luck-box 2" flipper EM’s were used extensively. To make matters worse, in my referenced example, I believe that the eliminated player got to choose the next game for their surviving group. (madness!)

If you still want to give this format a try, I’d suggest providing the top 4 seeds one bye, and have Round 1 that 8-9-16, 7-10-15, etc. play one 3-player game each, with 2 players surviving each game, and seeds 1-4 joining their respective surviving twosome for round 2. This way, there’s even more incentive to finish in the top 4.

For game selection restriction, I’d say that once the best seeds have joined the fray, each group cannot play the same game twice in the Mini-Ladder portion. But players may once again have a “clean slate” of game choice starting Round 5.

I ran that once with a top 16, but I did two games per round. Top 16 in 4 groups played a 4 player game then 3 player game and then the remaining 8 were re-sorted based on original seed into 2 new 4 player groups that played a 4 player then 3 player game and the last 4 standing played 3 finals games with 4, 3, 2 players respectively. This was a launch party so it was a way of keeping the masses happy by only playing (I think) 6 rounds of group play before advancing 16 people for the finals. The final 4 played all games on the launch game.

That’s why this format needs a lot of qualifying games [16] before the playoffs to get full value. Probably better suited for a league than a one-day event.

Too much emphasis is put on qualifying position in the format imo.

If you are the 2 best players int the event you best qualify 1-4 or someone isn’t making the finals.

Sucks when the best players are put in a match early and one is eliminated who might have taken second down the road.

Sure “qualify better,” but I’ve never seen a qualifying format line up with such granular accuracy to not leave room in the finals format for error.

The majority enjoyed it and commented positively

I still don’t like survivor finals format one-and-done aspect, but if it’s the determined format, I like this idea a lot better than the second game being 3 players, and third game being 2 players.

My league finals are a 4-player survivor format. There isn’t a ton of time qualifying and so if you lose in the first round and are out it’s not really that much longer (2 months) until you can be back in finals for the next session.

I don’t like top seed always having pick, so for the sake of variety I do it like this for my league finals. Top seed gets first pick of game/order and move on down the seeds. The results of that game determine who gets to pick the next game and order. Winner of game 1 picks game 2, second place gets first pick of order as long as winner picks a game, third gets second pick of order. So the winner gets to pick what they want to play, and are typically player one on that game. 4th on game one is eliminated, just like 3rd on game two is eliminated, then it’s a 2-player game for the last game.

I’ve had pretty good feedback from it and actually started doing a b-division finals too. The players in this group aren’t at the open finals level yet, but they really light up with the excitement of that finals format.