Just got the ok from work to attend this year. Gotta be one of my favorite events, if not my favorite. Four game papa style qualifying, single elimination playoffs (assuming that’ll be the same), PPL clubhouse on wharton, doublewide grill, papatv, kickass people. Who is in?

What exactly is PPO? Is there a link to some information?

What exactly is PPO? Is there a link to some information?

Hoping to see BBH, 24, WWELE, and Transporter in the main bank

Thanks for the info. Jorian got the other 100 Circuit points today; I watched as they streamed the Boras finals on Twitch, where he beat Per Ahlenius in 5 games. Jorian won games 1 and 2 on NBAFB and I500; Per won games 3 and 4 on WH2O and Star Trek [Stern]. Jorian won game 5 on MM 49M to 40M.

I’ll update the Circuit stuff and pass it on to Mark as son as I get the full Boras results.

Did they break ties out with qualifier result too?

I don’t have full results for Boras, but I do have the two finalists, and it looks like no one in the playoffs besides Jorian had prior Circuit points this season, so the 3rd place person would have 60 points now and still be outside the top 40. Which are, unofficially: 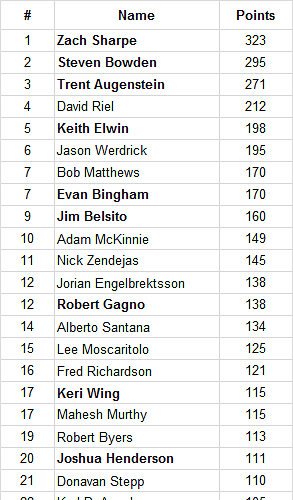 “Final Circuit standings will be determined promptly after the last Circuit event. Any player in the top 40 of the rankings will be invited to the Circuit Final. The tiebreaker for the 40th position will be determined by whichever player has the highest finish in a Circuit event in that season. If a tie remains after a single event, the next highest finish will be considered. This process will proceed until the tie is broken, or a coin flip is required.”

@PAPA_Doug, does this also apply to ties in the top 40 that are NOT for 40th position? Meaning, if myself and Bob are tied but I have the highest finish in a circuit event this season would that mean I’m 7 and Bob is 8?