This is pretty off topic from pinball game play, but I bet there are a few of you interested. For the last three years (the same period during which I’ve accelerated my pinball playing) I’ve been getting into film photography. I mostly shoot 35mm because of the equipment I have, with probably a 70 percent black-and-white /30 percent color split. I know there are some photographers among us players (hey @genex) though I don’t know of any outside of PDX who work with film these days.

I’m curious what success others have had, if any, shooting pinball and pinball events, especially at tournaments, especially in large, indoor venues like Pinburgh where lighting is not ideal and where there are a number of considerations like not getting in players’ faces. Because I’m often playing in these events, because I like to travel light, and because I don’t like to simplify my photography I won’t be carrying an elaborate rig. I think the last two years I’ve brought a Rollei 35se, a fun if sometimes wonky little thing. I’m thinking of bringing a Pentax Spotmatic F this year for a little bit more versatility (and because it meters up to 3200 ISO).

If any of you shoot with film, do you have favorite film you use for pinball events? I’ve had decent look with Cinestill 800 (thankfully I have a few rolls in my freezer) and Ilford Delta 3200, but might try pushing some other film stocks. Any other tips? Obviously, I don’t shoot with a flash during competitions (and just in general) and don’t get in front of players in the middle of matches.

Since I’m asking, Here are a few favorite pinball photos shot on film. 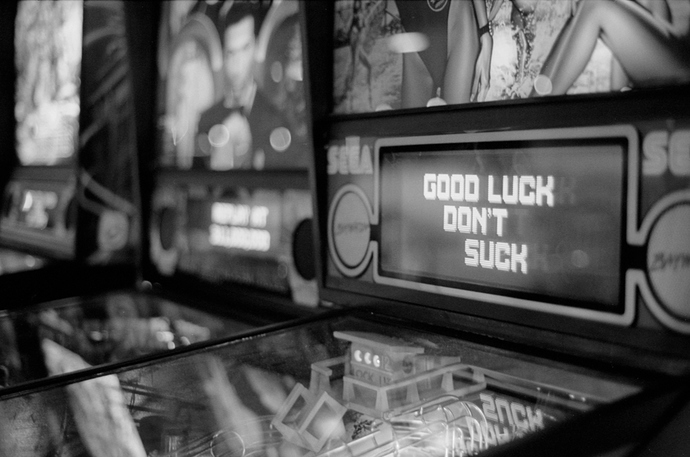 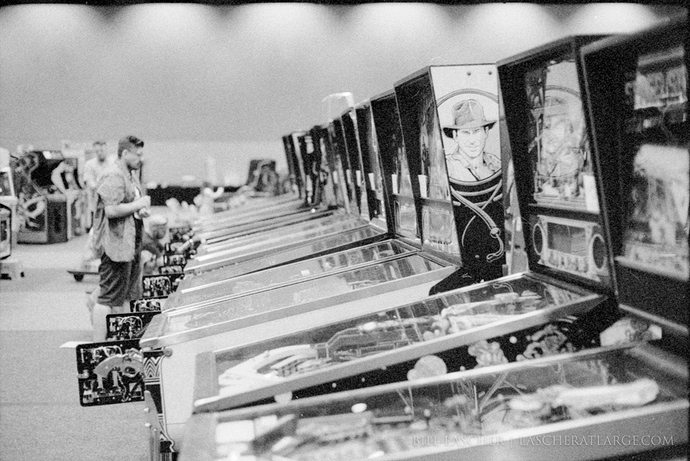 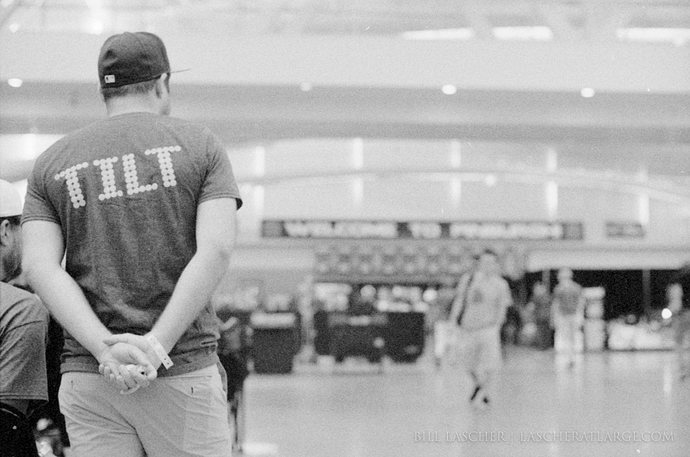 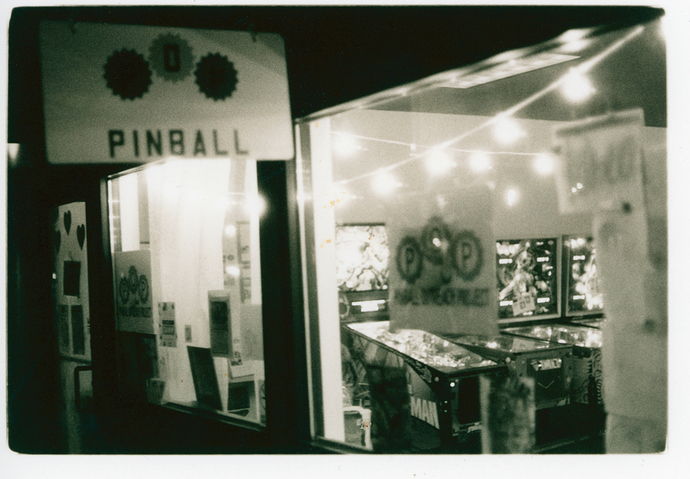 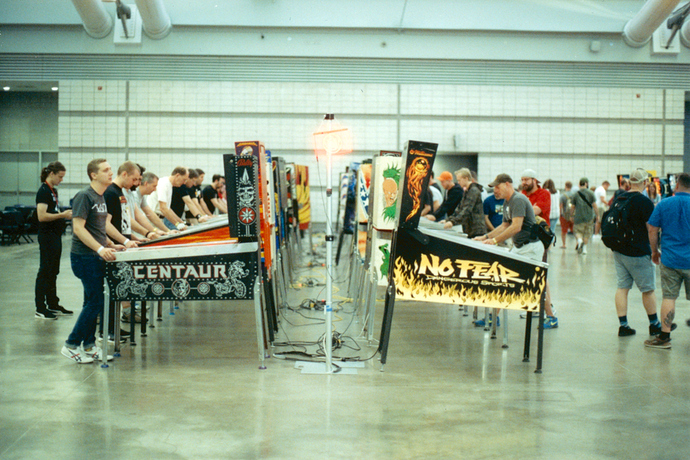 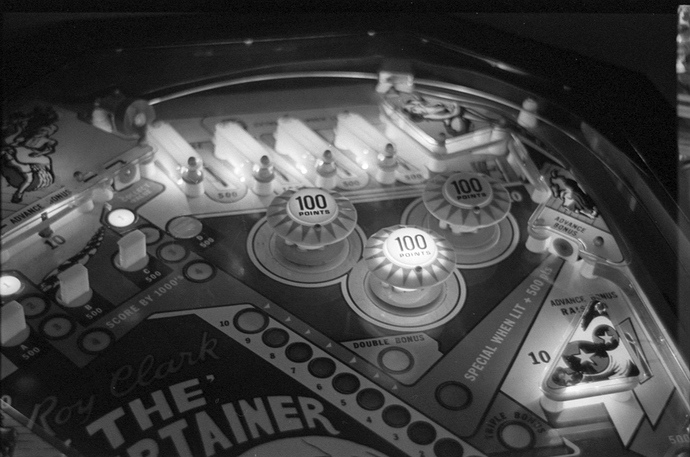 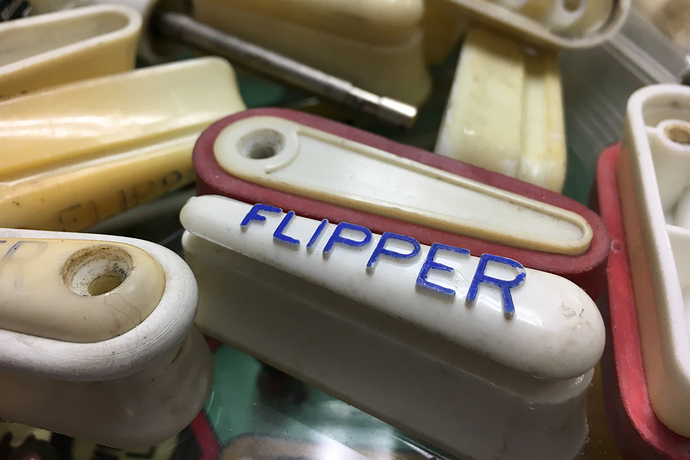 Skyler Johnson shoots film at Pinburgh. I usually shoot some Polaroids but don’t have enough space to also bring film cameras. I haven’t shot much pinball on regular vs instant film myself but maybe you can talk to Skyler. I’m sure others are also doing it but not sure who they all are. See you next week!

Is Skyler on Tilt? That’s someone I’s like to meet.

I tried to @ him and didn’t see that he was on here. He’s on FB though

Thanks! I’ll either introduce myself there, or at Pinburgh. Don’t know if I’ve ever officially met you either, but I’ve seen and enjoyed your photos. I’ll try to say hi to you, too.

I actually majored in Fine Art / Photography way back in the 90s but I don’t shoot much of anything at all really these days. Once Costco stopped processing (about 6 or 7 years ago) along with providing a CD full of scans alongside, for less than $5/roll, it got a little too time consuming for me to keep up with. I still have an old Minolta Dimage 35mm slide scanner on my desk that I use from time to time but it takes me hours to get through a couple rolls. But anyway… you asked about favorite films and tbh, my most favorite film of all time is Fuji FP-100C peel apart film for Polaroid pack cameras. I stockpiled a bunch of it the day they announced it was being discontinued so I’m fortunate enough to have a fridge full of the stuff. I’ve even done some pinball photos with it but for some reason I can’t find my scans of them.

Also glad to hear you’re using a Spotmatic. I love my Pentax M42 stuff. Mostly, I’m a huge Olympus fan though. The Pen FT is my favorite camera of all time (and half frame my favorite format) but the XA4 and OM2 (heck, the whole OM system) are my go-tos, even with a huge cabinet full of Nikon, Minolta and Canon film gear. It was pretty amazing what one could find cheap at the swap meets about 10 years ago.

If I shoot film, I’ll usually shoot medium format. I have an SLR (Hasselblad 500cm) and two TLRs (Yashica Mat 124G and Mamiya C330) that all take amazing photos. Kodak Portra and Ilford HP5 were usually my films of choice. I’ve tried shooting pinball with them once or twice but the lighting wasn’t great. I haven’t tried doing it at Pinburgh though, haven’t really even thought about it. Maybe I’ll bring my gear with me next week!
I don’t have the equipment to develop these days, I used to have a mom & pop photo store nearby that actually would develop my 120 film and I would scan the negatives. They closed a few years ago unfortunately. I’m currently trying to set up a darkroom in my house… I have an enlarger, I just need to get all the chemicals and trays and other stuff (I’m lazy so this will take forever). Now I mostly shoot digital with my Canon 5D Mark II that I bought new when it first came out. I wish I would’ve taken more competition photos but I think I was too afraid of annoying someone haha. Here are some shots from PAPA 12 I think, 10(!) years ago. 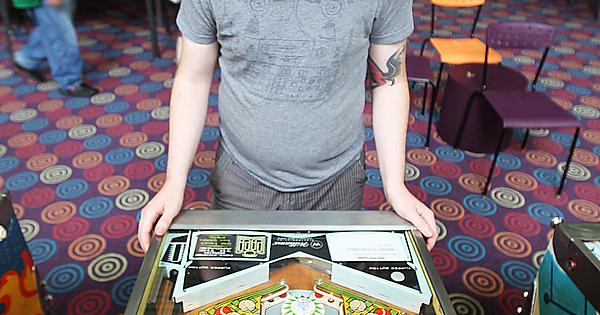 (^^^ formatting cropped this one bad since it’s in portrait, click to see the whole thing) 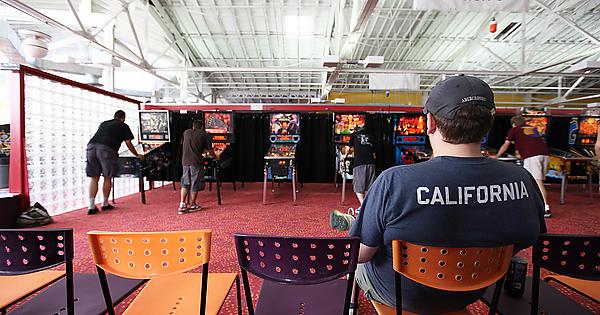 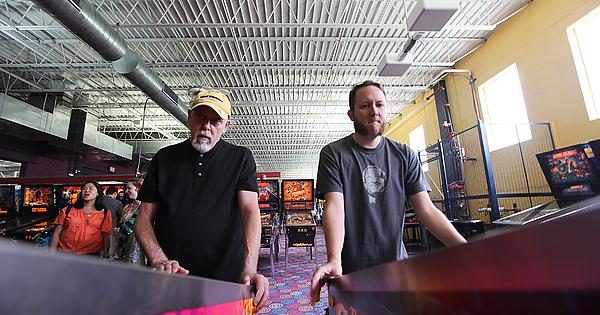 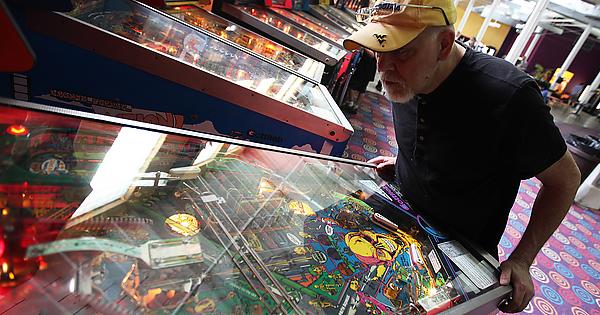 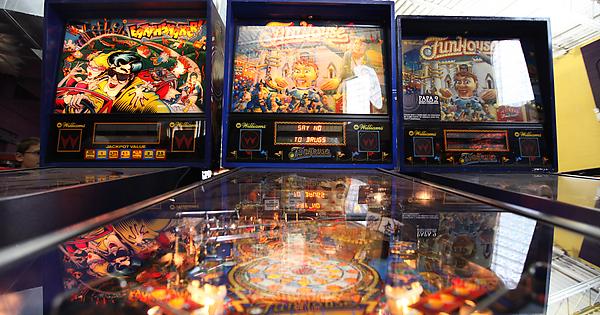 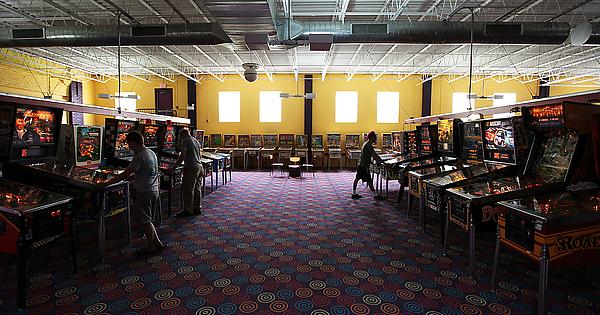 oh gosh sorry, I just meant to post the links to the photos, I didnt know they’d embed in the post

Well, I posted my shots, so I can’t complain. Thanks for sharing. These are great. I’ve still never worked with medium or large format film. I’m sure I will eventually but working with what I have for now.

Yeah, scanning and the time it takes to get scans I think do justice is the biggest obstacle to me doing more with my stuff. I’m fortunate that I have an excellent lab two miles away though, plus a cooperative darkroom a similar distance for any B&W printing I’d like to do or high speed scanning.

My wife gave me the Spotmatic as a gift two years ago. I hadn’t been familiar with it but it quickly became my favorite SLR. My favorite camera to work with overall was the prewar Contax II I started with (different story) but its shutter ribbon has problems and it’s not easy to get fixed.

@BillTheSpill Hey! Decided to make an account as I should have had one anyway haha. I will be at Pinburgh and Im bringing my Leica M6 with some portra 400 and Ilford Delta 400 will prob push both. Bringing a 35mm and 50mm lens. Say hi!! would be super rad to mmet a bunch of film shooters at Pinburgh!! See you there as well @genex.

I found an old film shot in my archives… always liked this one. Double exposure of a Stern Galaxy. I took this with my Nikon F3 (which has a lever to re-cock the shutter without advancing the film), probably with a 35mm lens, definitely on Solaris 400. Taken at Pins & Needles in LA during a tournament night back in 2012. 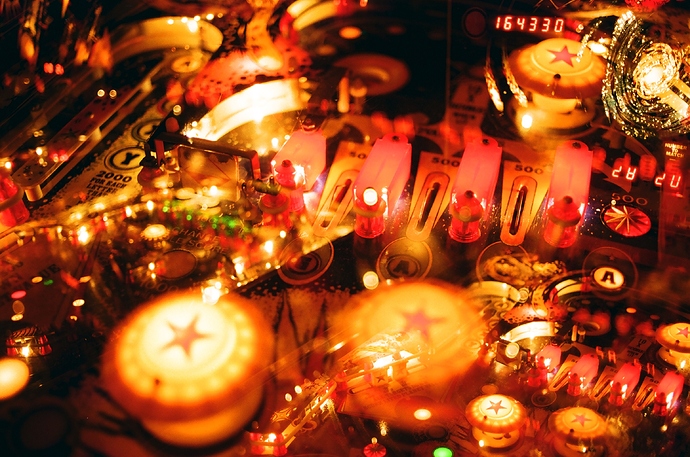 Ha! Don’t think I remembered your first name but definitely remember your handle from Instagram and your visit to Portland. Hey!

@BillTheSpill Oh right haha didn’t realize that was you that made this thread! for sure man cant wait!

Here are a couple I took years ago (2007!!!). Both of my friend, Jacob, playing in Portland. Same camera - Voigtlaender Bessa R3M. Don’t remember the film, but the first is probably Tri-x 400. I still shoot film - and I like the Ilford 3200 that Bill mentioned in the first post. But I don’t take many pictures of pinballin’ these days, so I don’t have any good tips. I’m about to pick up some prints using Kodak Pro Image 100 (pushed one stop). I’ve heard it’s pretty good, and it’s cheap! 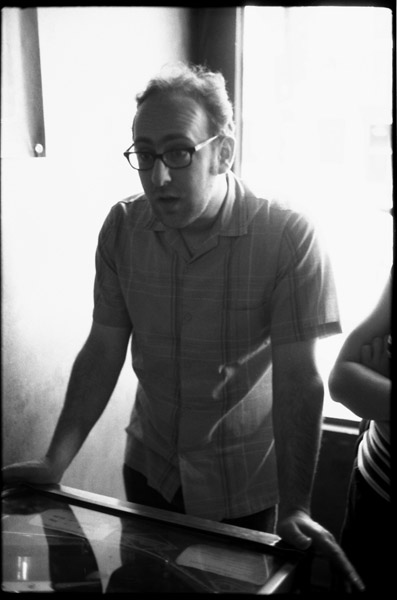 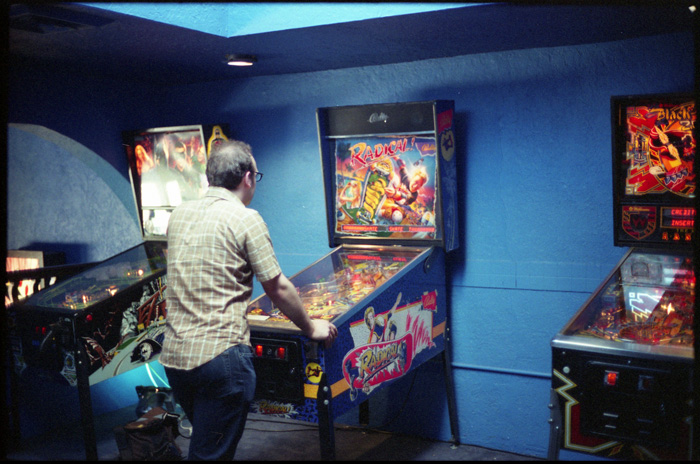 I remember that Radical! well. Since it was only ¢25 it was the game I used to play at Ground Kontrol when I was down to my last quarter. I could usually make it last for awhile. It was always a sad day when that quarter disappeared quickly.

Also, look at how much room there is between games!

Love his expression in that first one. These are great!

I caught him right as he tripled drained during a multiball

Yeah, so much space! That might have been during one of their renovation periods, so some machines were in storage.