The quirk with this one is that players can offer motions to change things about the competition. Each player can do so five times over the course of the tournament. These motions are voted on by the group. Everyone gets one vote… unless they have an I VOTED TODAY bracelet or some other proof of having exercised their democratic franchise, in which case they get two votes. Controversies are brought before the TD aka Pinball Prime Minister or Multiball Monarch or whatever you like.

Example motions:
Change to a different table
Offer to trade someone to another group
All players adopt some condition (covered display, play with switched hands, have to play seated, must full plunge)
Continue playing on a table after you realize it’s in some way broken
Change the allowable # of playable extra balls
Compete for a countable non-score (bear kicks, Rudy hits, vertical ramps in Radical!, waterfalls in White Water, etc)
Everyone gets the score of the next player instead

Politicking and deal-making are encouraged. You can trade unused motions for political considerations.

As stated in the topic title, this is an experimental format, as in: I’m running it for the first time as I write this! Any suggestions, especially those that build on the election/voting/parliament theme, are welcome.

Idea: a group voting unanimously on a motion can propose a constitutional amendment - some lasting rule change or condition that affects all groups for the rest of the game. But do we have each group vote for which way they want to go, then count the group votes, or have every player vote separately? 50% + 1 or is a supermajority necessary?

Emergent behavior: the players have started writing out their motions and the results on index cards! 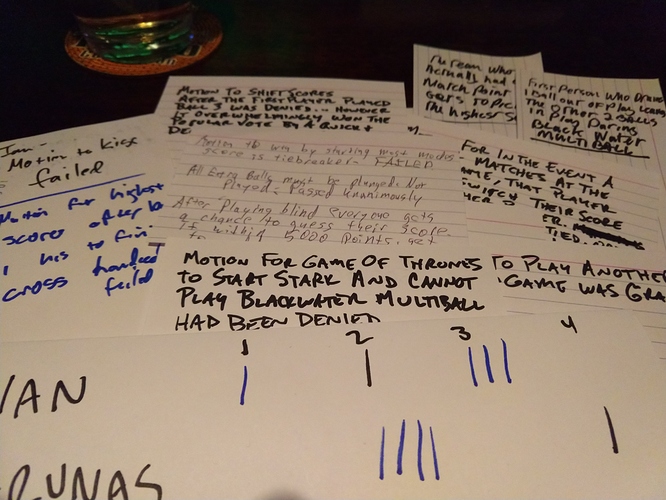 I don’t know why I find this so funny.

I also really like this idea for a tournament. How many games was the tourney? How many people played? How long did it take? (I’m thinking of stealing this).

Edit: was anything off limits? Do you have any suggestions after having run this for anyone else looking to run this?

This sounds fun, but I gather you need some strong personalities to really make this take off. Or, at the very least, no passive people. Otherwise they would just get run over by the more aggressive politics.

@pinwizj would this be eligible for WPPRs? Would I have to make certain things unable to be legislated?

@pinwizj would this be eligible for WPPRs? Would I have to make certain things unable to be legislated?