Pinball at the Rock and Roll Hall of Fame

So, I’ve spent the last year working on this large scale project. The exhibit has been out for about a month now but I’m just realizing that this hasn’t really made its rounds in the pinball community.

So, backtracking a bit here. Previously, @ClevelandPinball ran a tournament on a Guns and Roses pinball machine Slash donated to the Rock Hall. After the tournament the game was put into an exhibit, where it has never been played since.

Fast forward to 2017. Someone higher up at the Rock Hall contacts Superelectric. They want to make an interactive exhibit using pinball machines, since rock and roll was a common theme, and much like pinball, had a reputation about it for a long time. Of course, it’s an awesome idea, so we start scouring down titles that they would want. And while we’d like to get games in the best condition possible, best condition isn’t really affordable. So, we spent the majority of a year restoring, repairing and cleaning pins to make them worthy of being in a museum.

Getting some of the games was easy. Aerosmith, AC/DC, Metallica and KISS weren’t hard to come by since they’re all so new. (Fun fact, they didn’t want Iron Maiden. Neither the band nor the game are Rock Hall approved

Others, which they specifically asked for were a little harder to get. Punk! for instance, turned out to be less expensive to buy and ship over from Australia than to buy within the US.

Alice Cooper’s Nightmare Castle coming out this year was perfect timing too! Alice had just recently went through his garage in Arizona and found the first execution prop he used, along with a Andy Warhol screenprint of an electric chair, and decided to donate it to the Rock Hall! Coordinating with Spooky Pinball, we managed to get the first game off production just in time to have Alice himself induct it along with the other items!

The exhibit turned out really stunning too. There’s a Dolly Parton and right next to the machine they have the EXACT dress she wore on the backglass. The plaque with it talks about how male dominated pinball was, and then goes on to mention Belles and Chimes! I’ve got a picture of it somewhere I’ll upload later.

The Bally Kiss and Stern Kiss are on either side of a Peter Kriss drumset.

Between Guns N Roses and Metallica are various things the bands wore.

Tommy and Wizard are near the acoustic guitar that Pinball Wizard was composed on.

Beat Time and Elvis have Beatles and Elvis memorabilia in between them. There’s some… unique stuff. Like a Beatles game about wearing a fake mop top, and an Elvis statuette that apparently was filled with liquor or perfume.

The exhibit is set to be there for at least the remainder of the year, so if you’re coming by Cleveland for, say, the Cleveland Pinball Show, you should totally stop by and see it. They’re set on token play, you get some free with your admission, after that it’s a quarter a token. Here’s the kicker though. They’re only charging a token per game. Alice Cooper’s Nightmare Castle and Captain Fantastic cost the same amount! I think they’re crazy, honestly but it’s their games. I’ve been pretty astonished at the level of use, too. 1000 plays per week per game minimum! Some mechs have come completely off, after losing 6 of the 8 screws fastening them in just by the sheer use! It’s been… eye opening and we’ve had to make adjustments/ buy some things to help prevent wear or slow it down.

Here’s an article about the opening, if you’re interested.

Anyways it was a long project, and I’m proud of it, and wanted to share! Thanks for reading!

It’s a really nice looking exhibit and has definitely been exposing / reminding lots of people about pinball as a whole and that it’s still a thing! Cleveland residents get free admission, so if I can find a metered parking spot it’s strangely become the cheapest place in town for me to play location pinball 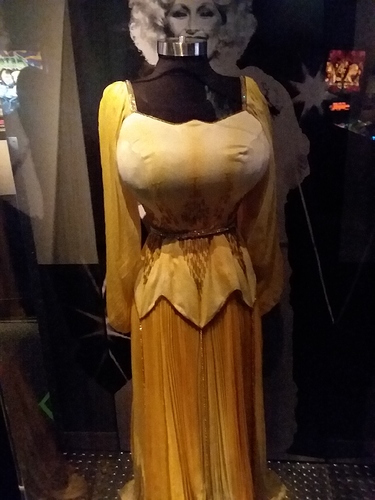 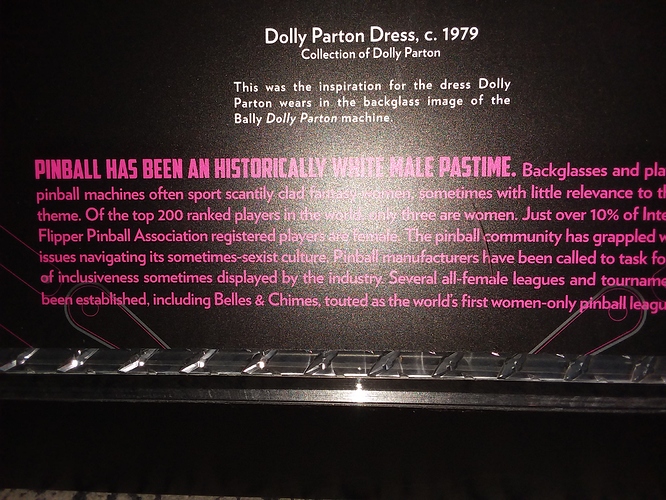 Here’s the dress and plaque I was mentioning. Edited, found a better picturepicture of the plaque.

Wow. This seems like a wonderful exhibit and a great opportunity to remind people that pinball continues to thrive. Getting a Belles & Chimes nod should also be helpful to promotion. The very first comment on the Cleveland Scene article you linked is from a man who sounds thrilled to bring his wife there as she would “go nuts there” because she played a lot of pinball when they were in college. She sounds like a potential new Belles member! (also, I wish this was there when I was in college just outside of Cleveland).

Congratulations on what seems like an absolutely great project!