Perspective on pinball streaming vs eSports

The popularity of Fortnite streamer Tyler "Ninja" Blevins was on full display Wednesday night, when an exhibition event featuring him in Las Vegas peaked at 667,000 concurrent viewers.

Need to get big time celebrities and athletes to start playing pinball.

I saw an article that said Fornite had 42M players total and 3.4M peak concurrent users. They’ve probably made 1B in revenue. They can pump an unlimited amount of money into esports competitions and prize pools. Stern just needs to sell a few million pinball machines right?

It’ll be hard for pinball to exist in the same realm as eSports. Besides it being a social activity, folks have ready and easy access to the game they’re watching. They understand the goals of the sport, and the rules.

It’s not that video games have a bottomless budget- it’s accessibility. Personally I don’t think pinball should be trying to grab that atmosphere… each game is unique, even the same game is different by machine. Plus, there’s no clear goal, it’s a do your best/ survival thing until it’s over. Which could be 3 minutes or 2 hours. It’s been said before but pinball is closer to bowling than team sports.

It’ll be hard for pinball to exist in the same realm as eSports.

Pinball was making more money than the entire movie industry not that long ago. It could happen again.

The Rick Stetta Story, starring Johnny Depp, would get things rolling again. Any big movie with a pinball player as the primary character would work, but Stetta’s story is good and Depp looks kinda like him. One character portraying another character. d;^)

I don’t mean that I don’t think pinball can be successful. I think there’s plenty of potential growth and we’re already starting to witness it.

Pinball isn’t a spectator sport like Overwatch, Street Fighter, or Fortnite though. After I watch some Overwatch League I hop online and play the exact same format as I was just watching. It’s more accessible than even physical sports like (American) football or baseball, because button presses are typically less strenuous for people of all levels of ability motion-wise.

So when I say I don’t think we should be comparing ourselves to eSports, I mean that pinball varies much more than most existing game mediums. It’s hard to expect casual observers to understand what’s going on just looking at the state of nearly any pinball machine. The learning curve is real and takes dedication. Pinball struggles to be digestible to people not already invested into the hobby. That’s not really too surprising.

In Super Mario Bros., I would play 2P with just about anyone that wanted to play it. But when I can consistently get to W4 (without skipping stages) without dying once-meaning they didn’t get a turn- I noticed they’d lose interest pretty much entirely, no matter their actual skill level in the game. 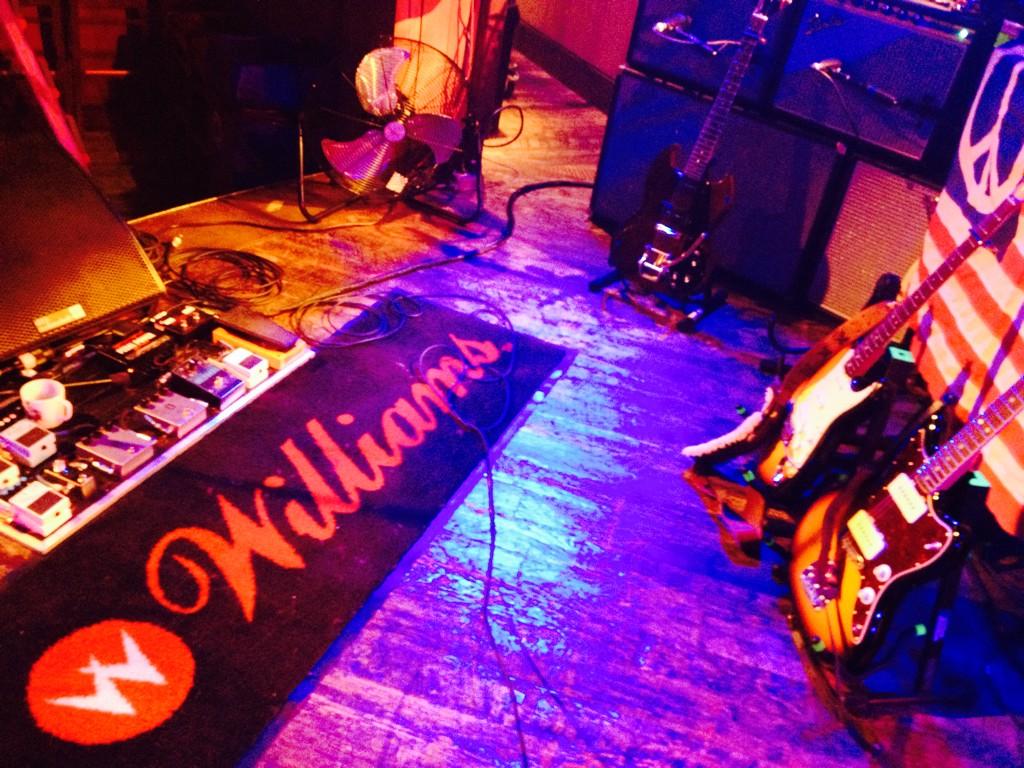 He regularly talks onstage about local locations he’s visited and often has video games or pins on stage. When he did a show in SF a couple years ago I got a call asking if I knew anyone at Free Gold Watch. He wanted to hang out there after the show to play pinball and maybe some music. I called Matt and he said it had been a long week (it was a Sunday night) but thanks anyway. Pretty sure Molly said she’s been to his lair full of pins in socal. Dude is doing his part.

I am not familiar with the Rick Stetta story. Could you point me somewhere where I could learn more?

That’s not a thing. Just something I’d like to see to get pinball back in the mainstream.

There was going to be a low budget Stetta film years ago. Last I heard, it’s still not going forward.

There is a little bit of it in the “documentary” called Special When lit on iTunes (along with a few of the Pinball folks on here) but in my view that documentary misses the point and focused on Pinball strange rather than the cool aspects of Pinball like social interaction etc.

In terms of accessibility, I never really understood why the pinball community doesn’t embrace video pinball more. I’m talking specifically about Zen Studios and their massive output of tables. They are doing a great job with their simulation and designs and try to reach out a lot. Yet it still strikes me as though “real” pinheads don’t want anything to do with video pins. Sure, it’s a different thing but at the same time, it’s still pinball. And as much as I (obviously) like playing the physical thing, I really love video pinball for the additional possibilities and the fact that I can play it basically everywhere (my favorites are playling on the Ipad and on Steam with the monitor in upright position).

One of 2 Things need to happen:

A) The players need to play in a sound proof booth ala LoL and other esports so that the play by play can be broadcast for the crowd to hear .

Or (and the one likely to happen)

B) You broadcast to the crowd and the players just need to deal with it.

It is the viewer experience holding back pinball from the next level imo compared to other esports.

Pinball as a watching experience is on a bird’s eye level similar to the BR phenomenon sweeping shooters right now. Fortnite, PlayerUnknown’s Battlegrounds (PUBG, because i am not going to say anything other than that acronym for my fingers’ sakes), and H1Z1 created a market while established series realized they needed to hop in (Grand Theft Auto, Paladins, etc.).

It’s a simple enough concept and anyone who’s seen Battle Royale or it’s spiritual successors know what’s up: take X players, drop them in Y location with no gear and tell them to kill until they’re the last one standing. Everyone has their own twists as well (Fortnite with it’s building, PUBG with mil-sim realism, H1Z1 with a crafting system). Depending on the specific game, rounds take 15-40 minutes to play out, and a lot of it is boring.

“Walking simulator” is an affectionate name for these games, since you have to keep moving into a smaller play area to stay alive. Streamers at the top of the view charts are personalities as much as good players, as seen by Tyler “Not My Relative” Blevins above and any of the myriad of other personalities on Twitch. Dr.Disrespect puts on a WWE-style persona. Shroud is just damn good. Forsen took his Hearthstone meme career to another level.

Look at the major non-tournament pinball media that’s good and you see the same thing: strong personalities. We don’t necessarily do non stop excitement as a sport, and we don’t want to go the route of golf as a social movement. If pinball gains the popularity of Fortnite, I’d expect Deadflip to be the new Tyler1 on that alone.

Now to swap to tournaments: BRs suck as a spectator eSport. Nothing happens for too long and you can’t just cut to filler all the time. You’ll have your dedicated following, but attracting new viewers is hard when they have to watch nothing for a while but hear about how ScoutPilgrim found an 8x scope in a house and therefore might be able to provide long range support in the future.

Pinball has common themes in all games, but at the end of the day we run into the issue that we are like BR games in their pacing. Not just that, but we are like watching ALL games in one broadcast. Imagine watching game 1 in PUBG, followed by Fortnite game 2 and H1Z1 game 3. 3 games, 3 similar concepts, 3 systems to comprehend and understand as a new viewer. I don’t come to you with an answer and I’ll try my best to provide and experiment on that via PAPA, but that’s what we are facing at the end of the day.

I agree with a lot of the points you make here, but I’m going to expand on a couple of the things you glossed over that I think make a huge difference.

The reason that video games are a much bigger success when streamed is because there is a massive number of people who have played video games, and they all recognize the visceral feeling of getting a kill, doing damage, and surviving a standoff with an opponent. I’ve played games like that since the days of MS-DOS and Atari. I’ve dealt with the ‘just get a kill’ mentality in dungeons and dragons, and that’s not even a video game. People can identify with that almost universally. You don’t have to have played PUBG, or Leage of Legends, or Overwatch, or anything else to understand ‘that guy got a kill, which means progress’. It doesn’t even have to be particularly true. I know nothing about Splatoon, but I’m pretty sure kills mean nothing to the actual score, but I can still get a gut reaction of ‘that guy got a kill, which is good’.

Compare that to pinball. Players on stream seem to hit even the hardest shots. There is no sense of how hard that is without playing that particular table in that exact setup. And the result of hitting the shot isn’t necessarily obvious. And thus there isn’t nearly as large of visceral satisfaction akin to earning a kill in a video game. It’s much less relatable for anyone who hasn’t played that table in that setup. Now assume that you haven’t played pinball much at all. You can watch someone start a multi ball all day but that means wildly different things on each different table. You can hear ‘he was two shots away from Vengence multiball’ on Star Trek, and that means much less than ‘he was two shots away from Kobiashi Maru multiball’, bit how would you know that if you didn’t know that table? How do you convey the importance of even locking a ball to someone who doesn’t play much pinball? And how do commentators convey that sense of missed opportunity while on stream during the action?

I watched a stream that had Iron Man in a tournament. I know nothing about Iron Man, other than ‘it’s really hard’. I watch the players hit ramps four or five times in a row with seemingly no impact. I’m sure it scored points, but I have no idea how many. I think it starts a mode eventually, but I don’t know. When they drained a ball from a bricked shot, I know that’s bad, but I get no sense of ‘they were one shot away from a bonus multiplier’, or ‘they were three ramps away from multiball, that would have made all the difference’. I love pinball and I still miss the nuances. How are average joes supposed to understand, let alone appreciate it?

Another difference is that video games are very dynamic, and the screen is always changing. A pinball table is 90% static. Which one is going to hold someone’s attention better?

I much prefer watching golf…