Hello Everyone! I’ve been putting together an analysis application for the scores from PAPA 20. It’s a few months after the event, but I thought it would still be interesting to share.

I’ve included interactive visuals on Division, Players, Games, Finals, and an exploratory tab that lets you compare scores of Games against one another. The main crux of what was being looked at were qualifying score values across the competitors. Which games have a linear vs. exponential build?

For the Finals, it’s a simple look at the brackets and who moved on; since the number of games played was very minimal, I didn’t think it made sense to include finals scores in the analysis.

Thanks to @ASG for giving me access to the scoring software to get all of the qualifying scores. 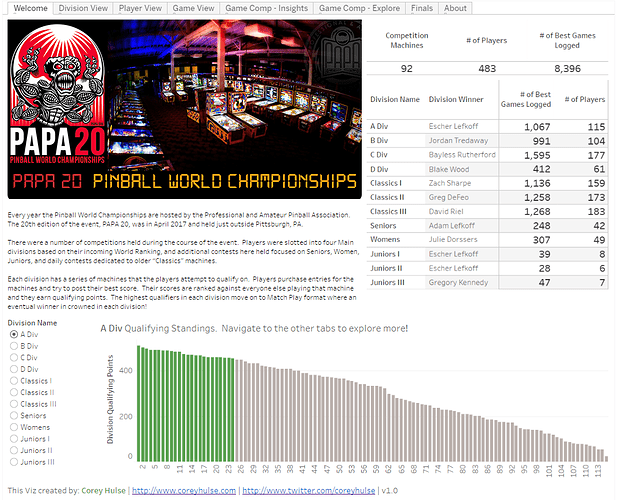 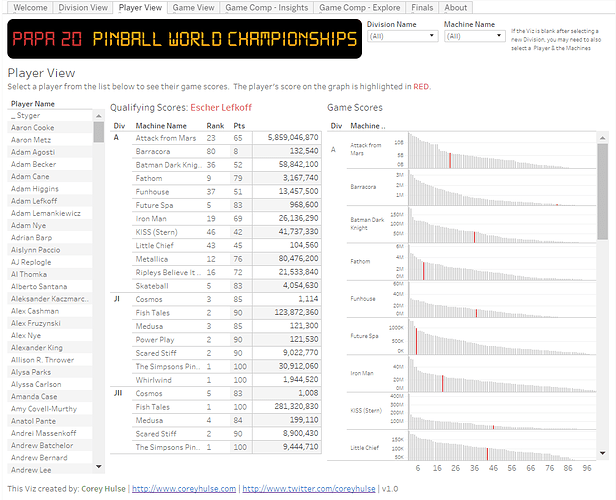 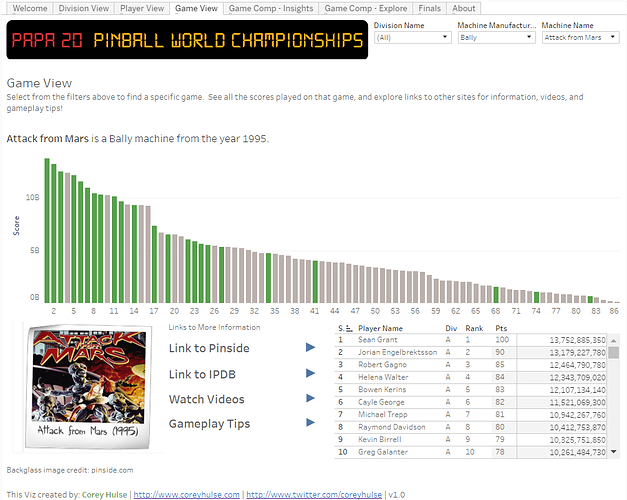 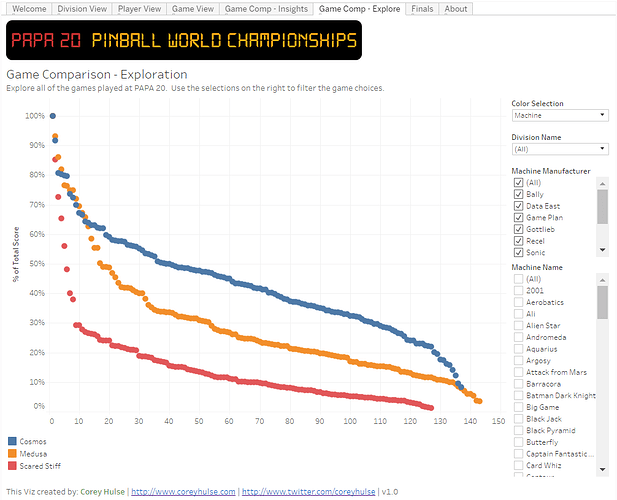 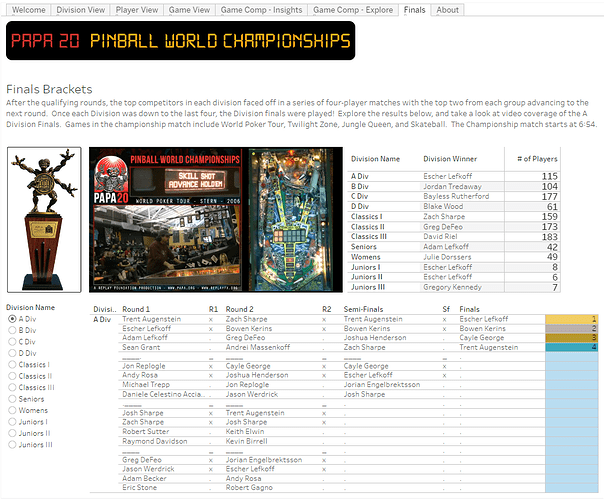 If you have any comments/questions, please let me know!

What are the most interesting things you have come across when putting this together?

So I thought a number of initial things were interesting:

The number of people in C Division. A - 115, B - 104, C - 177, D - 61. I wonder how this compares with prior years (I haven’t looked yet)? It would also be interesting to cross this against the incoming IFPA rankings. Were a lot of people forced into C? Did they choose to play in C? D didn’t have that many, but it was also a shared bank with other divisions and it was being used for less games.

Repeat Qualifiers in A & Classics - When I was typing up the Finals brackets, it was interesting when Excel would auto-fill the name because they had also qualified in A or another Classics division.

The insane scores in A Division - I know this is best game with unlimited qualifying, but these scores were much bigger than I would have guessed coming into the analysis.

I think Attack from Mars was interesting because there’s a drop between 9.2 and 7.3 billion.

Skateball was another interesting one, where a few people put up large scores of 4 million+, and the next 40 people were between 1 and 4 million. 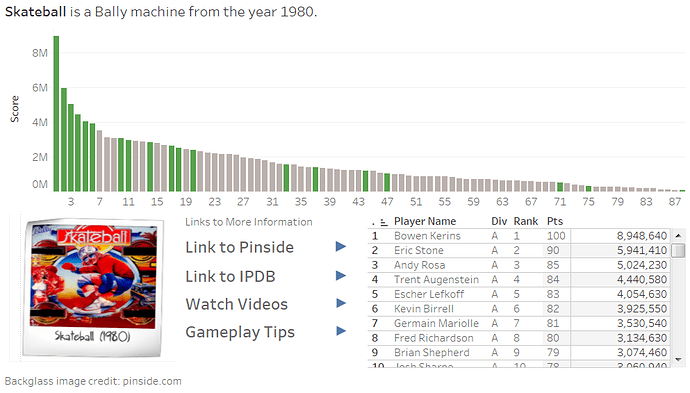 I would also assume that most Sterns would have more exponential scoring, but was surprised by Ripley’s that it was fairly straight ahead. 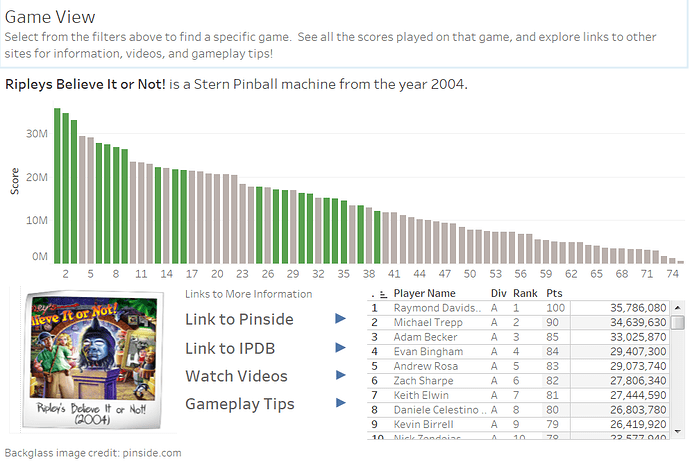 It’s also interesting to see games where people do “the thing” and suddenly skyrocket ahead of everyone else. In the D Divison Bank (and Seniors, Womens, and Juniors), Scared Stiff and Fish Tales were like that, but I was surprised to see Power Play have such an explosion in scoring for a few people, especially on an older Bally. 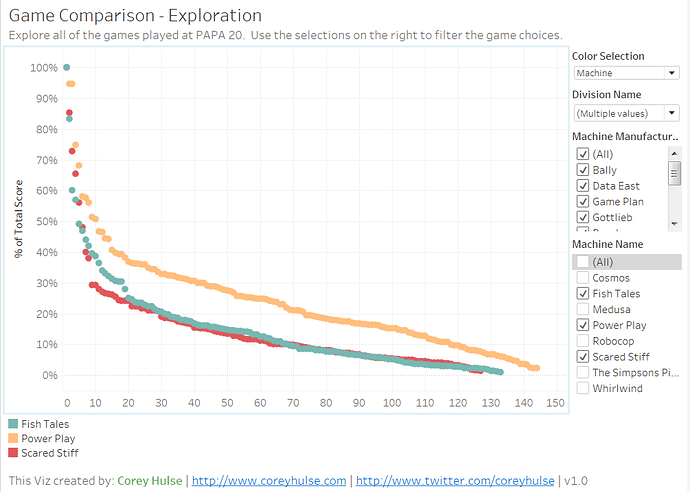 I haven’t done much yet on the Player Analysis other than it being a way for a person to look up their comparison vs. others, but something interesting would be to figure out did an individual player choose to play many different games, or if they focused on a select few. Some missing data points that would be interesting would be the number of cancelled games, or to see a player’s progressing as they incrementally had better games. What would be the ultimate pull would be to get time stamps on those entries, and then you would see how it progressed over the course of the event and reveal the embarrassing number of times I played Transformers and still scored 17 million.

I wish I could use a multiplier on my Likes for this thread and scoring analysis app. Fantastic stuff!!

So I am thinking ahead to Pinburgh and I would like to do a similar analysis. Thinking ahead, I would be interested in obtaining the scoresheets after the event. I know I flagged it after the 2016 event and the sheets were already gone, but I wanted to express my interest in getting the sheets from this year (as I am assuming individual scores/results aren’t logged?).

I think it was mentioned last year that some groups don’t log scores, but even if 80% do there is still enough interesting data points to do something with.

Ideas I am thinking, and am interested to hear from others:

It might take me three months after the event for me to get the data together, but then we’ll have a cool data set to use! Especially with 800 people expected this year.

Keep in mind too that because of game movement (“this game’s broken, go play ___”) there will be some score sheets with discrepancies in data or results from the wrong game, or groups recording their entire series of games in the wrong order, among many other weirdnesses.

But yeah, this would be a terrific resource. Even getting the game-by-game results by machine category would be a huge step. I wish we could enter that data live, but it would likely prevent the trains from running on time.

Thanks for this terrific stuff!

I wish we could enter that data live, but it would likely prevent the trains from running on time.

I don’t know what you guys are doing for data entry…but there could be a future where players enter their data online as they go. People in the groups could sign off on the results through the app. Or, they could additionally back it up on paper and then the person at the desk just has to verify, which would be faster than typing it all in by hand, as is done now.

(Yes, I realize there is work involved in getting this set up…I’m just thinking far ahead).

This is good thinking, but it’s also a potential major fail state for the event if that doesn’t work 100% correctly on time. With the paper backup this might be possible, someday (“in the not too distant future”).

This is good thinking, but it’s also a potential major fail state for the event if that doesn’t work 100% correctly on time

Agreed. Though if you did paper backups as well, and encouraged people to enter as they go…you’d have plenty of warning (almost the entire length of time between rounds) if something wasn’t working right (and could fall back to manual entry from the sheets).

I’d be less worried about the software failing. It’s only 800 people entering results. It’s a pretty small amount of data going back and forth. Having reliable data connections for smartphones is much harder and even worse is designing a system that encourages people to avoid making mistakes.

For some reason people skim a lot on phones (and there are the always-present issues with cheaters). In a Pinburgh system I would recommend forcing all players to enter all results (rather than one player entering results and the other three approving those results). With a receipt sent to all players immediately (including flagging those results as being bad).

In a Pinburgh system I would recommend forcing all players to enter all results (rather than one player entering results and the other three approving those results).

Seems like this would be doomed to failure without a huge level of player buy-in. I imagine there would be lots of folks who are averse to entering their score, either due to not having a smartphone, or simply not wanting to deal with the hassle. Heck, I almost never enter my own scores in MP any more, due to the occasional friction of having to log in again because my session has expired. (Pulling out the Yubikey and opening the password manager is a pain when there’s pinball to play). Add in the pain of passing packets out of a packed convention hall, and the friction gets pretty high.

That said, something SMS based could potentially work with slightly less pain – maybe at the end of each round, every player player receives an SMS prompting them to reply with scores from the game they just played. It lowers the barrier to entry from a smart phone with data reliable enough for an http session to a cell phone capable of maintaining a minimal cellular connection. The downside of course the cost of SMS.

For a tournament like Pinburgh you need every player to sign off on results, rather than one player submitting results on behalf of the group. It’s going to suck no matter what.

Heck, I almost never enter my own scores in MP any more, due to the occasional friction of having to log in again because my session has expired.

For a tournament like Pinburgh you need every player to sign off on results, rather than one player submitting results on behalf of the group.

Yeah, thinking about it a bit more, anything SMS based would require at least 3-4 messages per player-game. With 750 players playing 40 games, SMS costs would be around $900 at Twilio rates. (Yikes).

Not to mention you’d be sending messages to non-US/non-CA phone numbers. Prices for international SMS are bonkers.