I know it’s primarily newer games like Star Wars that are known for having huge playfield multipliers but I finally got my Diamond Lady working 100% and just realized that you can build the playfield multiplier up to 15X which you can cash in during multiball.-i had thought it maxed at 8x previously but all the X’s can stack together. I know there are other games with pretty big multipliers. I have an Alien Star which has a 5x playfield multiplier in multiball and I know of several others that have up to 5x as well such as WH2O. Are there any other older games that have more than 5x? Figured I’d ask the rules experts on here as there are still plenty of older games that I have limited rules knowledge on.

Does Genesis have a limit? I think the most I’ve ever done is somewhere around 25x during single ball play. With that doubled during multiball, even the pop bumpers become insanely valuable.

49x is insane! I just checked IPDB and the flyer lists it as 49x for single play and 98x for multiball? Is that accurate? 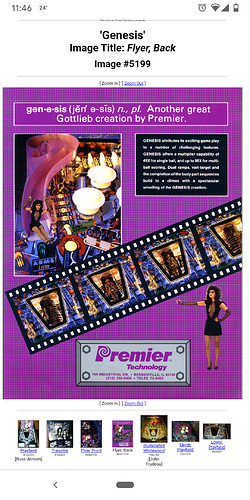 Party Zone and it’s 10 million pop bumpers (for 10 seconds). That’s the real big bang in my book (but the big bang award itself is too cool not to pass up).

Unfotunately they don’t stack with post-multiball 2x scoring for 20m a pop.

Yes, multiball doubles whatever the current playfield multiplier is. So if the playfield is at 10x, multiball is 20x. If 49x, then it would be 98x indeed. My Genesis is set up way too hard that to get 49 but I think I’m going to have some fun trying.

Am I being too picky by saying that Star Wars doesn’t have any playfield multipliers? Sorry, just had to say it.

Star Wars is more of a playfield zone multiplier I guess technically.

Flash Gordon only has 2x & 3x playfield but it also has two ways to collect Bonus on the playfield. So… technically, if you were able to do it flawlessly, you’d be able to score a 30x maximum bonus.

Addendum - 6x playfield is possible on this game! Good luck ever activating it though…

No PF X in TX sector?

Also not a playfield multiplier but Gladiators has the Abyss multipliers (2x and 3x) that multiply mode scores along with the “DOUBLE” spell out feature for 2x all scoring. 6x Beast Challenge overpowers everything in the game if you’ve built your Mega-Bonus to a super high level.

I’ve always been surprised no EM did 10x PF scoring…