I’m posting here on behalf of James (Jim) Cardona to announce his release of his new code for No Good Gofers. In the same fashion as Cactus Canyon Continued, this is a complete rewrite from the ground up which includes all new code from scratch, new music and sound, and custom animations on a 15" LCD!! This is going to be sold in a kit similar to the cactus canyon continued kit that Eric produced. Below is all the info Jim has provided so far with even more details to come.

And here is the verbiage directly from Jim regarding his new code + kit:

Here is what will be in the kit:

Here is what will NOT be in the kit:

NOT included is a P-ROC pinball controller. You must purchase one separately in order for this kit to work. The P-ROC is manufactured by the Multimorphic company and I have no affiliation with them. You can purchase the P-ROC board from them at:

Please note that Multimorphic manufacturers several different boards. Make sure you purchase the correct one. You do NOT want to buy the P3-ROC; however you DO want to purchase the P-ROC. The P3-ROC will NOT work. Also, I recommend purchasing the P-ROC mounting plate for your machine to easily mount the P-ROC. NGG is a WPC-95 era machine so be sure to purchase the WPC-95 mounting plate for your P-ROC. Any further questions concerning the P-ROC or its installation should be directed to multimorphic, not me.

Here is the manual for the kit here that’s still being tweaked and should help out with some of your questions:

The kit is a completely new game with all new code, animations, sound effects, voice work, music, and game rules.

As you can see in the videos, it has a 15.6 inch LCD screen for the animations.

There are 8 different mini modes and 2 wizard modes. The basic rules of the original game were discarded and completely written from scratch. This is a whole new game!

One of the things about the original NGG that I always saw as a missed opportunity was the lack of use of the 6 balls in the trough. Why wasn’t there any 6 ball multi-balls? Well no more. Of the 10 modes, 5 are multiball modes and they all have a variety of ball counts from 3-ball multiballs all the way up to 6-ball multiballs.
One of the 6-ball multiballs is called Thunderstorm. All of the playfield lights go out, including the GI and lightning strikes flash all the flashers. 6-balls are bouncing around and it is pretty awesome fun. That mode is a crowd favorite so far.

Another mode that you are going to like is short circuit. This is similar in idea to the original game in that bud is below the playfield eating wires. Different though is that the flippers are reversed. Hit shots and Bud gets electrocuted.

NGG2.0 is written 100% from scratch and not one line of existing code from the original game is in my code. No intellectual property of Planetary Pinball or Williams is involved here. I not only wrote the new code but also replaced all of the sounds and animations with new custom work that I either did myself or hired professionals to create.

For golfing, the player hits strokes which advance the ball to the green. Once on the green the player putts out and receives an award based on how far under or over par the player is for that particular hole.

The golfing and mini-mode goals can be worked on independently or simultaneously in that progress toward the individual goals are separate. However, once a mode is started you do not accumulate strokes, for example, until the mode is finished. Additionally, modes cannot be stacked, that is, you cannot run several modes simultaneously.

As for balanced scoring between mini-modes, I saw pretty early that making all of the mini-modes have balanced scoring when weighed against each other would be a futile effort. My solution was to have the modes chosen randomly, that is, when mode start is achieved the player does not choose which mode is played. Once the mode is completed by hitting all the required strokes, gophers, flashing lights, etc., the completed mode will not be available to play again until after all modes are completed and the final sorcerer mode is played (more on that later).

The exception to the above is the ripoff mode since it is started by captive ball hits.
Also unlike the original game, there are no progressive shots. In the original game, a completed jackpot, for example, was worth more each time it was hit –thus, progressive. This was the main culprit, I believe, in making the game imbalanced. In my code, jackpot shots do not increase in value. In fact, no shots increase in value just because it was hit more than once.

There are other ways to increase a shots value such as lighting super jets or earning 2X by completing several cart path loops. Again, more on that later.

Most people described NGG as an unlicensed knock off of the movie ‘Caddyshack’ and I didn’t really want to go in the ‘Caddyshack’ direction as licensed assets would need to be paid for. Instead, I stuck with an unlicensed theme and story-line which I created. The story behind NGG2.0 goes like this:

A bear wanders onto a golf course and loses his memory when hit by an errant ball. Buzz, a gopher that hates all golfers, discovers the bear, names him Bud, and convinces him that he’s really a gopher too. With Bud’s raw strength, Buzz hatches a plan to take the golfers out and reclaim the course as his own.

The music, animations, voice work, and sound effects follow this comical and cartoon-ish vein and were made to be accessible to all. There is no profanity or anything vulgar here. Just like the original though, Buzz tends to be critical and confrontational of the player’s shots and says things like “miss it,” “hey hotshot,” “get off our turf,” or “you’re holding your putter wrong,” and will most certainly laugh when the player drains.

Bud, on the other hand, is the comic relief of the team. He’s a bear that thinks he’s really an oversized gopher. Let’s just say he’s a little slow on the uptake. 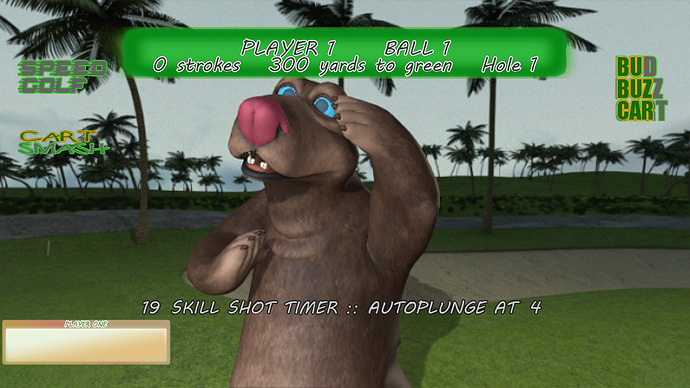 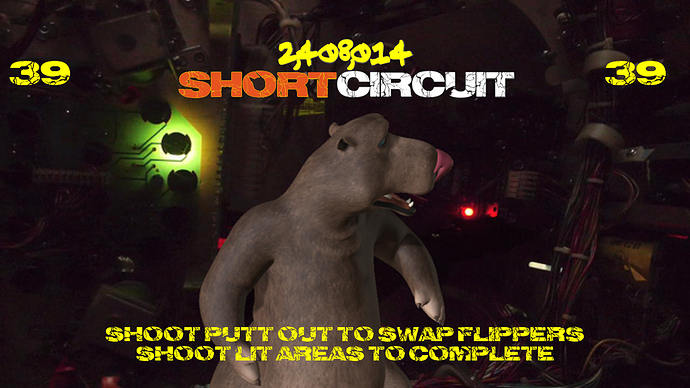 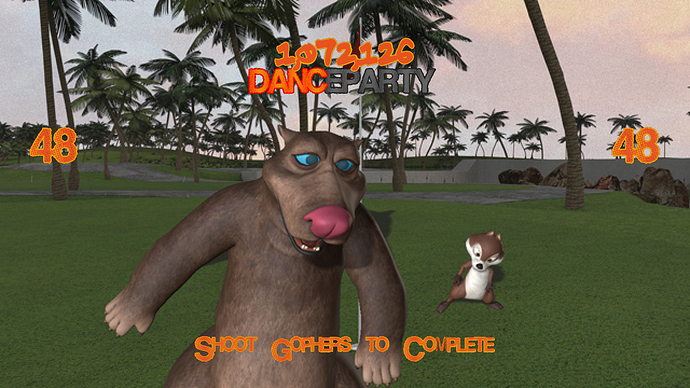 A few more updates for everyone.

Oh man this is awesome. I’ve had a Gofers since buying it new in '99, love the flow and speed but the rules were never all that great. This looks to be an incredible replacement.

(visualize the Shut Up and Take my Money GIF here)

Will we be able to order after the stream?

Kits are being built now and will be ready for sale in the coming weeks. I believe part of the purpose of the stream on Saturday is to put some heavy real world testing on the code and get feedback from the players and anyone watching. The hardware is ready at this point. He just needs to polish code, animations, sounds, etc. and anything else that comes up during the stream.

Looks like a cool project, hope I get a chance to play it some day!

Totally agree with you on the fonts. It’s on the top of my list of things for him to change!

Super cool. The animations are obviously rough but that’s to be expected. Changing the bear’s nose from pink to black would be a pretty quick fix. Hope to get a chance to play this. I love No Good Gophers.

Agreed! And if you are in or near Philly, you should come down and play it with us on Saturday.

@travam you guys still have one?

Nope sold it a while ago

Don’t forget to tune into the live stream this Saturday (2/1) at 6pm est. The first 30-45 minutes will involve us actually upgrading an existing NGG machine to the new hardware. Game play will start immediately after and we plan to play for 4-5 hours!

Final reminder to tune into Delaware Pinball on Twitch tonight at 6pm for the NGG 2.0 live stream.

Couple of updates from Jim:

As to some of the other comments over the last few days, I have done some research and have a question for the potential buyers.
Some people have said that they wanted something like BOP2.0 which has a dual boot feature. I checked that out and observed that BOP2.0 was a 2000$ kit. It doesn’t appear that they sold that many. Maybe 100?
If I put in all the work and purchase the licenses from PPS to make NGG2.0 a dual booting game, it is obviously going to raise the price of the kit substantially. A few were already balking at the price I am asking (that’s another subject), so the question is this: how many additional people would actually buy it with those considerations?

Also he made some tweaks to the graphics, see below:

Does emulating the original ROM in a No Good Gophers cabinet really require a license from PPS? In the upgrade process, you’ll pull the WPC controller to replace it with the P-ROC and still have the physical ROMs. If you had a USB board with ROM sockets for PinMAME to load from, would you still need a license?

Does emulating the original ROM in a No Good Gophers cabinet really require a license from PPS? In the upgrade process, you’ll pull the WPC controller to replace it with the P-ROC and still have the physical ROMs. If you had a USB board with ROM sockets for PinMAME to load from, would you still need a license?