Maybe one of you EM geniuses can help me out here. We just got a Nip-It at POP, and I would love to mod it so that at the end of a game, the locked ball saucer ejects any locked ball. I was trying to come up with something I could hook into at game end, unfortunately it seems like most of the game reset stuff on EMs happens at game start.

Does slam tilt eject? I know Nip-It has one, though it might be the mercury ones.

Interesting puzzle. I wish I understood more and could help. Just thinking out loud here, maybe someone can confirm if I am reading correctly.

When the ball count unit reaches 6, 2 things happen. It trips the game over relay, killing all power to the playfield coils, and it activates the match feature which is controlled via the scoring motor (to cycle through each of the players)

So the challenge appears to be that you need to trigger it before the game over relay trips. One way to accomplish this would be to add a second (expected closed) switch to the hole. Rewire from the 6th position to go through that switch before going to the game over relay.

This will prevent game over if there is a ball in the hole. Then you can wire the hole eject relay to the position 6 as well, and it will eject, then end game.

Wouldn’t that mean it would also end a game when a game kicks out of the eject through normal play?

I took a look at the schematic (pretty bad online) but also thinking out loud here, you might try turning off the match adjustment, and jumpering the “off” side of the match feature (which is nothing) to the ball release coil? 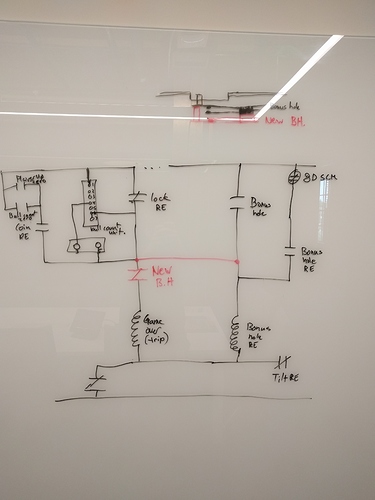 Here is what I was thinking thinking better explained.

Should not happen in normal play because the ball count unit is not at 6. I don’t understand how the lock re fits in here, so I might be wrong there.

This all assumes the bonus hole is the correct relay to target (I am assuming that is eject, but that might be lock (i.e. kick next ball into play) and there is another that is eject. I think it vet’s the idea across.

Am I missing something?

Actually, I probably am. I propose to cheat and also add a diode.

Without knowing what all the bonus relay does (i.e. run the score motor when it shouldn’t be running) best bet may just to be to jumper the hole kicker solenoid itself to the game over trip. It’s by far the easiest to test with a long jumper cable.

Yup. Simple and effective and will do exactly what you want.

Would it be possible to set up a similar thing on a Big Valley, but after each ball. So it can be used
in multiplayer tournament setting.

Hooking it to the outhole relay would do it on each ball.

You’ll need a diode inline to prevent firing the outhole with the kicker. Same with the game over-> kicker jumper.

The problem with kicking every ball is that the game will register that as a drain for the next player.

Ah, that’s a good point. I’m not sure if the game has a ball index relay (most Bally games do - they call it something like gate relay), but it will prevent the player unit from stepping or the ball counter from moving until the playfield is qualified.

So, in practice, it may not be a problem? I’d need to look at the schematic for the game to make sure.

Ah interesting, I’ll have to try that when I get to the shop.

This will prevent the game from kicking the outhole or tripping the game over relay on every kick. You only need the diode on one wire.

It looks like this will work on the coil that kicks to the shooter lane, but not the one that kicks from the outhole to the trough. My only concern is that an errant kick might hit a slingshot or some other switch and accidentally validate the playfield. I’ll probably still just make it kick at game end, and do one player games for tournaments we run.

Sorry, I meant the outhole relay not the outhole kicker. I don’t understand your meaning about qualifying. Assuming that was the case, and the ball count had already advanced (I don’t recall if trough switches are involved in that circuit), then yes, but qualifying the playfield is probably done either by your first point awarded or by the ball gate. There’s no action I can think of that would qualify it erroneously.

Mostly I was worried that it would hit a sling after being kicked and score 10 points.