Does anyone have a clean mp3 of the music from Night Moves? 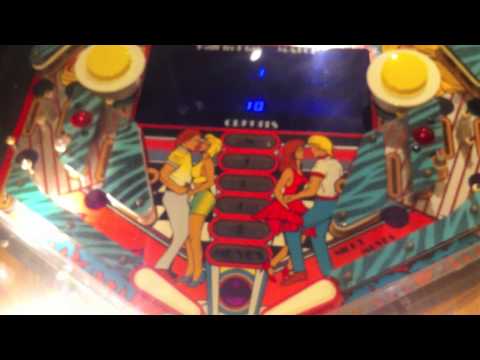 This person captured it (about halfway through the video) but it’s just on their phone and the quality isn’t the best.

Some of my favorite pinball music, just seeing if someone has a copy, or could possibly capture it from their machine.

This is a good project. In general, it’s so awesome when you find pinball music on youtube. That’s how I got pretty into the dungeons and dragons tunes.

There’s a Night Moves at Holy Frijoles, maybe someone there could record it.

Here’s a 5 minute sample of the PinMAME rendition:

I don’t think it does the recording of the real thing justice though.

Thank you! This is some truly incredible music unlike anything from… well, any pinball machine. Combined with the weird “transport” mechanic returning from TX-Sector this is a one of a kind Gottlieb.

Some of the Gottlieb 80b era machines had BY FAR the best music ever. Night Moves, Robowar, TX Sector. Does anyone know the artist that recorded the tracks? I’ve always thought it a shame they are uncredited for such amazing work, and it seems a fair bet it’s the same person?

@bkerins I still have my Tascam up there from recording the bands. Good timing! I’ll try to get a clean record when I have a moment @jdh

@jdh do you need any other system 80s while I am up there? Probably next weekend. I have genesis, diamond lady, tag team, bad girls as well.

@JakePeterson Unless there’s someone else here looking for recordings of those other machines, I’m really just looking for Night Moves! Thanks for offering to record, that’s super cool of you.

@jrb Thanks for the PinMAME sample! It’s definitely better than nothing, but yeah it’s not quite the same as how it sounds on the machine. Something about the kick especially is really clicky.

Would love to have all of these.

@jdh @CaptainBZarre just a note to say I haven’t forgotten about you. We just finished breaking down / setting back up from PinBaltimore then we had league finals. Sheesh, I’m exhausted! Will try to get this all recorded this week.

No worries at all, no rush here. I appreciate it!

@jdh @CaptainBZarre here is the night moves main loop. I still have to master Genesis and Diamond lady, but I’m kinda busy. Will get to it soon enough. The sound board is dead in bad girls… Grrr. One thing at a time.

Hey! This is really awesome. Thanks so much for the putting in the effort to record and upload this. Much appreciated

@jdh no sweat, I have some remix stuff I want to do with these loops anyway so this will just serve as a catalyst for getting that going. Happy to help.

Some of the Gottlieb 80b era machines had BY FAR the best music ever. Night Moves, Robowar, TX Sector. Does anyone know the artist that recorded the tracks? I’ve always thought it a shame they are uncredited for such amazing work, and it seems a fair bet it’s the same person?

I don’t know who did it offhand, not sure if Dave was around in this era or not. The music for this, and at least TX-Sector (probably others) is way more interesting than you think, too. You can see even just from the last 2 recordings as of this post (live .wav and the pinmame recording) that the music is not in a set order. Rather, there are several sections of 4- or 8-measure long that are played together semi-randomly. It starts the same, but even after the first 4 bars they diverge.

I remember noticing this in TX-Sector (music not always the same order), so now that I’ve seen another example of it, I’m kind of obsessed with it.

It’s not as random as you think. There is a lot of thought put into how the music works. It’s actually more like 16 measures per significant change (basic music phrasing). Even if things feel like they turn on / off every 4-8 measures, anyone that understands how music is structured will hear those longer phrases driving everything. It’s situational, based upon ball state, and sometimes tied to a gameplay milestone as far as I can discern.

I imagine that it works like a 4 track. Using Night Moves as an example, you always have your base track at plunge, but you may get other textural tracks that overlay, based upon your score, state, or the state of other players. Other tracks may be layered upon your base track at different intervals. Completely different music plays at multiball, then on exit, you go back to your base melody. When you return to the base melody, this is a major milestone that opens the door for other overlay tracks. It is directly tapping into the loops, phrasing and general music theory of sample-based hiphop and electronic music.

It seems like the rules are different form game to game, but that is the basics of how it works based upon my reverse enginEARing.