The patch has been removed.

Is it still capped at 1 jackpot per multiball, or does this value sequence increase during the same multiball for multiple jackpots and then reset to base value for the next multiball?

It is not capped. The build towards lock and multilball just starts over.

Ah yeah, my mistake. So the value will pick up where it left off on the next multiball?

What am I saying, yes, it is capped. Multiball ends on drain or next lock made.

Excellent work, and nice touches!
Plus, I think this modified ROM stays true to the original game intent/strategy.

Amazing job, really well done. Hurricane would be a cinch to fix compared to this!

This is phenomenal work on an already amazing title.

Excellent work, and nice touches!
Plus, I think this modified ROM stays true to the original game intent/strategy.

Thanks. Yep, that is the funny part. Not much creativity here. Just make the damn thing work with what it has.

Amazing job, really well done. Hurricane would be a cinch to fix compared to this!

Thanks. Hurricane, wouldn’t know where to start. Besides, I believe it suffers on the playfield. Too much one way in and one way out on the mechs. And even the pops area.

That being said, we had it for awhile at our spot and had tremendous fun playing it.

When I had a Radical on location here, I would occasionally run into a bug where you would be in multiball, and somehow the game would fall out of multiball state as if the multimillion had been collected, but it hadn’t and there were still two balls still in play. Is that one of these fixes?

It is the ball search. It puts the mega-million into last chance.

To make matters worse. The ball search timer is running during the multiball presentation. And not reset on ball eject. So, from here there is only about two seconds to ball search. Better not play too comfortably.

Both issues addressed in this patch.

Really excited about this for our Radical! Standardized megas! Will post play vid once up and running. Thank you thank you!

The mega-million to last chance bug, @bkerins ran into this in his PAPA tutorial.

He also ran into some of the side effects of the buggy diverter control. Confusing him. Bowen never gets confused. So to confuse him, you bring on Radicaaaal.

The source to this problem is when a jiggling ramp enter roll under gate is causing a series of switch closures. It is not handled properly. People with a pinched gate on their game might never have experienced any of this.

Interesting! We saw it several times but never figured out what it was. This is fantastic!

For the curious, here is a rundown of issues found on Radical.

With a ball locked and some RADICAL progress, this progress is lost if the ball is nailed from the lock by opponents or tilt. Relocking basically resets the build-up to multiball.

Two balls in lock trough, when the one was supposed to be ejected, will always start multiball.

Two balls ejected to playfield, when the one was supposted to stay in the lock, will go to end-of-ball when draining down to one ball-in-play.

Part 1:
On Skate-or-die lit at start-of-ball, this is ignored on ball launch. So so wrong.
And even worse. The ramp logic stays like this into game play.
Until some unknown condition, where the game will accept Skate-or-die on ramp made.

Part 2:
Buggy diverter control can release the diverter too quickly. Before the ball would reach to it.
This also explains the false registering as a Bust-a-move ramp made, when the timing of events are divert->release->ramp made.

This is related to the one above. May occure when the ramp enter roll under switch is closed several times per shot on the gate jiggling.

When balls eject at multiball start, you only have about two seconds till ball search kicks in. Very dangerous for the controlled type players, because of…

Lock a ball without making any lower drops. On new ball-in-play make all of the lower drops and wait for the Million to time out.
They will stay down till the ball walks an inlane. No Spot letter.

Check out the flicker of the radicAL and Letter value indicators.

Tail slider starts on level 3 (third ramp shot is diverted to left and mode ends) for player 1. For players 2, 3 and 4 it is level 1.

Completing level 15 constitutes a memory overwrite that can freeze the ball in the lock.

RADICAL progress indicators chase light is awkward.
Shot indicators would occationally stay off after lock made.

One of the cool and appealing things with Radical is the lock mech, which is ingenious and unique. But it is also a delicate matter, that may throw two balls into play. For less than a direct failure, a ball jumping a switch, a ghost switch etc.

What we saw here is a timing thing regarding the logic of the lock lane. To not award “R” and SNAKE adv. on a ball exit. And for the sake of the plunger coil.

When this happens, the modified software lights lock and freezes RADICAL progress. Which is resumed once the lock is made.

This is regardless, if a ball is reinserted into the lock (even the back door as we saw here) or a ball is drained. And if the player fails to relock on current ball-in-play, this carries into next ball. Where the lock may be plunged.

The point is, RADICAL progress is not reset during events like this.

Thanks to Free Play Florida and the broadcast crew.

PS. The Spot letter on inlanes can be disabled in adjustments and always ceases on 4M achieved. 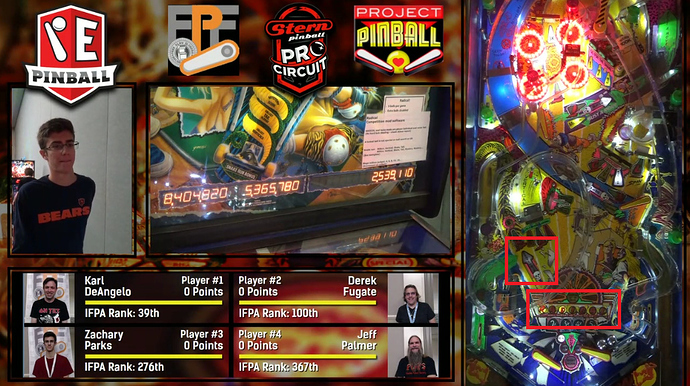 great example of the work you do Soren!

I saw this thread just after the Radical was packed up to leave for Free Play Florida. Fortunately I had some ROMs in my closet and was able to patch and burn a set to bring with me. We put them in the machine just before the tournament and fortunately they worked! The game was one of the hits of the tournament and was selected a lot during the finals. THANKS SO MUCH FOR THIS!
I’m glad you picked up on the tournament feed and saw the multi-ball thing happen. I will keep in mind the in-lane settings if it goes into a tournament again.