We are having a non-IFPA pinball tournament for the end of our season. Someone suggested the idea of a hat full of game modifers, some highly beneficial, some a penalty that you have to draw from.

I think I am going to go with this idea, but modified to handicap a bit. Each player will draw a random number, or maybe roll a d20 and their naughty rate will be determined by league finish. Then split the naught and nice modifiers into 2 hats. So if you finish 1st in the league, maybe you have a 19/20 chance of a naughty modifier and the last place finisher has a 1/20 chance of a naughty modifier.

I am looking for suggestions for advantageous, easily implemented positive modifiers and still fun negative multipliers.

I think examples would be

I will look through the critical hit cards for inspiration, but other ideas are more than welcome.

Varied ball save times, either electronic or manually implemented [just give them another ball]. Could have 5, 10 or 15 seconds.

Tommy mode - - cover varying portions of the playfield; could be either top / bottom or left / right orientation, too, or maybe just cover up wherever the Jackpot shot is.

Require cross-handed play for one or more balls.

Or one handed play

[positive]:
Swap positions with the leader between Ball 1 and Ball 2 (Nice for the player with the card, but does have a negative affect on the player that it’s being used against)

Copy Score between Ball 1 and Ball 2 - You’ll get the same score as whoever is in First after Ball 1, and you’ll just have to manually note the score.

Double Your Score - Full game score multiplied by 2x (could be used with other varying multipliers (1.25x,1.5x,2x,3x,4x)

[negative]
The “plunge off” rule can be used on various different balls (1,2,3,Extra Balls)

You could get a pair of boxing gloves, and you’re required to play one or more balls with the boxing gloves on.

Tilt Ends Game -> If that player tilts on any ball, their game is over and they have to plunge off any remaining balls

Not allowing a player to shoot a certain shot(s) on a game that are easy to notice from an observer (something that would “stall” the ball).

If anyone is interested, here is what I settled on. Trying it tonight. 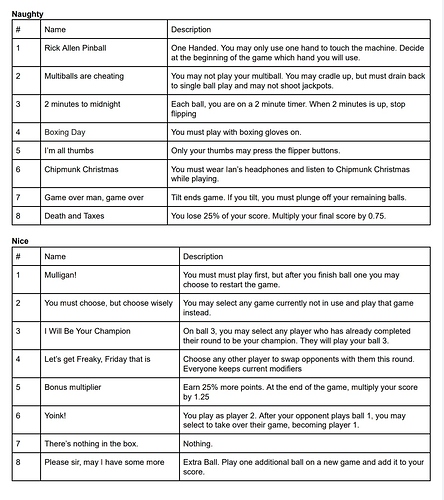 may not shoot jackpots kind of hard to do on some games what is the ruling on that if one does happen?
Maybe been to say can’t flip or hold till ball saver ends in multi ball