All portioning and inline winners/search are written. Now, the hard part is the sectional winners, then it’s just testing (just, ha!).

The nice thing is that I can reuse all of the search code for every magic screen game, with only special enhancements for the special sections added later.

A short video showing off the Magic Screen. Super excited. Now for the next game!

EDIT: Can’t post video, but thanks to @stevevt I can! Thank you again.

You have to link the video to text because of a bug in the forum software.

So I just need to put a title when I make the link? The one thing I didn’t try last night… haha!

This video shows a new game in the Multi, the first implemented with a Red Letter game. This game is a free second game with guaranteed odds and features. It’s a pretty unique feature.

Oh yeah! Golden Gate is implemented in the Multi-Bingo. One of my all-time favorites. Here’s a short video of the unique features in the game. https://youtu.be/t8Foi8j1u2I

A long time player is visiting and we are playing a bunch of real and Multi bingos this weekend.

Game #50 is done and it’s a weird one - Bally’s ‘The Twist’ is the only game with a ‘Magic Card’ feature - essentially providing 11 different bingo cards switched using a magic screen mech.

It also is the only game that gives a guaranteed advance per coin.

It has portioning circuits (but why?)

They control a tiny bit of extra ball portioning and a ‘run to the top’ on eb play.

I’m working on posting all the source code thus far into the public repo.

Hi…i am a new user here. I think first you should make a schematic. Otherwise it is hopeless! I made this one in the style of a bingo schematic, but noted each connector pin and modern power supply. I am no artist, and this was very challenging, but very satisfying.

In other news: I am up to 82 games. All of the Miss America games have been added, along with all of the games without moving numbers.

My current plan is to finish all 104 games for this playfield, then move to cabinet graphics and making a backglass!

I have Magic Squares, Roto and a small handful of Magic Screen games left.

All 105 games that use the standard 25 hole playfield have now been completed. I have additional playfields to rewire, and have a lot of cabinet work left to do (including making my stencil).

I have also been working on a new design that I’ll reveal when my schematic is complete. Hopefully, I’ll have time to work on that in the coming weeks.

I need to start heavily playtesting to catalog and fix any bugs that appear on the real hardware, then once everything is bulletproof, I’ll need to make some enhancements to animations.

It’s wonderful to go play the game and pick from dozens and dozens of games I’ve never played in real life, along with all my old favorites. Having a blast - and I’ve had quite a few friends and relatives come through over the holiday season and give it a shot or 10. I’ve not had any problems, really. Very exciting.

This is an amazing project! Very cool.

Intermission: I’ve been working on a brand new EM game (not pinball). Design and first draft of the schematic is complete. Here’s a typical blurry shot of the pencils. Announcement of game to come some time in the future… 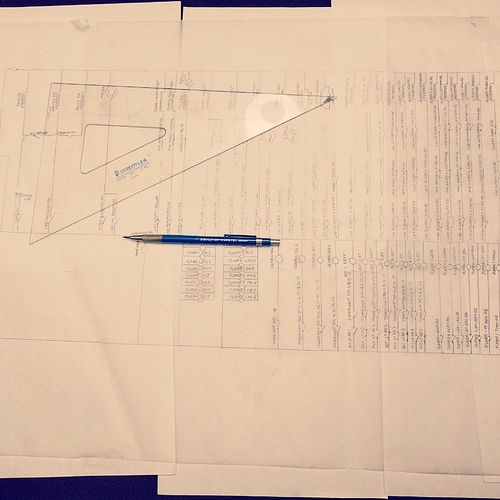 Been a while since I updated here… or anywhere! I have been working on my stencil for the Multi. It has taken me SO VERY long to do, and I’ve thrown out lots of ideas.

None were sticking, so I ended up re-using the stencil artwork on three different games, with subtle changes.

I also learned how to make a drawer from my good friend Steve, and am going to install the button overflow in that drawer.

One of the key things with this drawer is that I wanted to use original buttons without cutting or grinding. This design lets me do so, so I like it (so far).

I’ve started disassembly of the game - glass is out and siderails are almost off, and will be starting to cut my newly printed stencils this weekend (hopefully).

The other project I mention above is a bit closer - it’s a brand new EM arcade game with simultaneous competitive gameplay! More about that later. 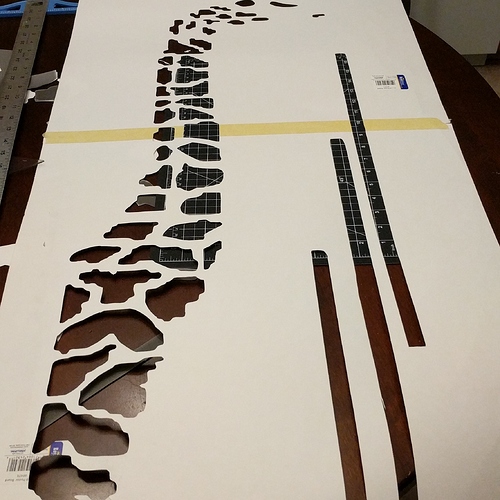 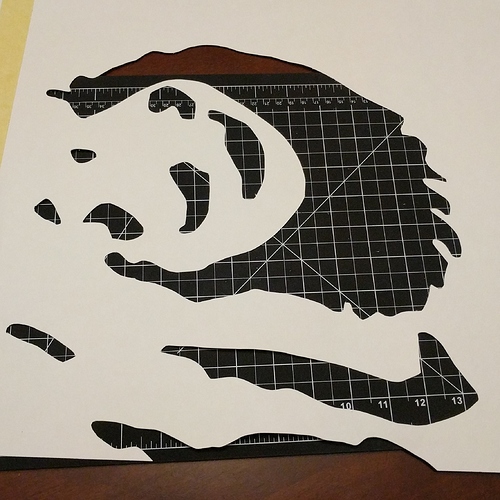 Alllllll the stencils are cut now, and I’ve begun stripping the cabinet for prep, prime and paint.

Hopefully tonight, I can start filling and sanding.