Minor malfunction vs. broken game and when to void

My apologies if this has been covered before but as a TD I often find myself being called for a ruling in which a player thinks a game is misbehaving and wants a resolution. I will usually spend too much time trying to figure out if the game is playing consistent and fair to all players (which is often difficult to impossible to determine) and/or whether the game is so broken that it should just be disabled and the game in progress voided.

Assuming no obvious “significant advantage” was created, is “play on” always the best answer or in certain cases of a really borked game (critical switches not registering, etc) would you elect to void said game and start a new one?

Hard to opine without specific examples, but play on for wonky game behavior is pretty much the starting point.

If the issue can be recreated, then you need to determine a different course of action possibly. Could be play on, game void and taken out of the tournament if it cannot be fixed, etc.

I would say listen to the concern, try to recreate in the moment if you can. If it’s something weird like switches not working or didn’t give them a jackpot, I say play on then watch the rest of the game and try to recreate the issue after the game.

I am being intentionally vague as I am asking a general question.

But let’s use a hypothetical example. Say I’m called to TNA with a 4 player game in progress and player 3 complains that one of the grid targets isn’t working and he can’t progress to start the reactor. Say I confirm that the switch is broken but no repair can be performed.

Should this game be voided and the machine disabled?

Is there a line that can be crossed where machine behavior becomes unacceptable (even if equally so for all players) and warrants voiding the game in progress?

If so where is that line for you?

Say I confirm that the switch is broken but no repair can be performed.

Game is void. Pick a new game. Disable for the rest of the event unless it can be fixed. That’s too important of a feature. But you’re totally within your right as a TD to simply put a sign on the game telling them there’s a broken switch and no one can get to reactors.

I had a Big Indian at Pincinnati where every single switch that was supposed to advance bonus didn’t work but like three star roll overs. I left it in and put a sign on it.

If it is a minor issue and it is fair for every player play on. If it is a major issue or if an issue majorly affected one player over another stop game, remove, pick a new game.

I found out in Pinburgh that if a skill shot times out on a player it is okay on so it has to be something significant to not finish out a game.

I know you’re asking a more general question and I don’t want to derail that conversation, but I highly recommend the Tournament Director Slack that was created a few years ago:

It’s awesome for those in-the-moment “oh no, is a TNA grid target malfunction major or minor?” types of questions.

So what do you consider major vs minor?

Here’s from the IFPA ruleset. 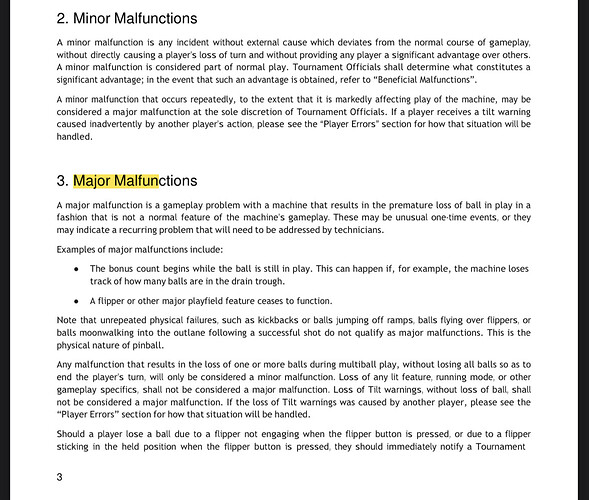 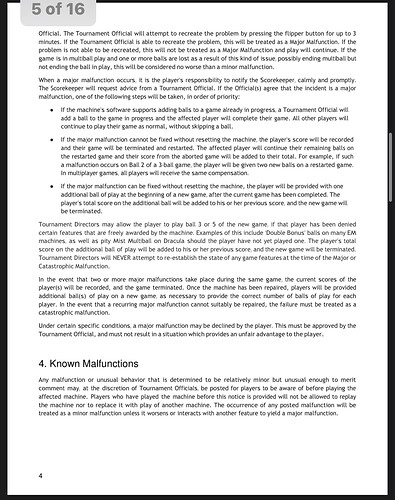 Sorry I should be more clear;

What constitutes a major vs minor issue with regard to declaring a game broken and thus void.

Basically the game is unplayable in your opinion. The current repeatable issue cannot be fixed.

I guess I was looking for some sort of consensus rather than whatever you as a TD feel is “unplayable “.

Obviously it is bound to be somewhat subjective.

Yep. That’s the point I’m trying to make. One TD may feel the the feature or switch isn’t bad enough to kill the game. Another might kill it. It’s not black and white, and you have to treat it on a case by case basis unfortunately.

Definitely join that slack channel. It’s great and will give you a consensus thought in real time as you have the issue.

Will certainly do that.

I might not consider the hypothetical TNA malfunction to be major. I might let the in progress match play out. There are plenty of scoring opportunities, and you can even still start reactors by hitting skillshots and mystery awards. But then I would pull the game after.

Exactly this. Opinions differ between TDs. The MOST important thing, which can’t be stressed enough, is that you are consistent with your rulings across the whole tournament **no matter who is playing or how it affects them.

In the TNA example, assuming the switch has been broken from the start - and not just developed mid game for P3. I would rule it as a minor malfunction (i.e. no loss of ball and flippers still work) and play on for the rest of the game, as it impacts every player the same. Then try and fix the switch, which is ‘most likely’ to be a 2 min job of resoldering or adjusting. No need to replay the game.

**The one exception being if you have made an obvious error in a ruling previously. In which case 2 wrongs don’t make a right. Hold your hands up and own the fact that you made an error, apologise to those concerned AND explain your reasoning why you made the ruling at the time, and why you believe it to have been wrong.

The IFPA is clear in their delineations but sometimes lacking in their communication of them. This has created untold tension in many tournaments.

A minor malfunction is basically a quirk, a deviation from normal play that’s an annoyance or a distraction that does not tip the scales in favor of one player and does not prevent you from playing the game as intended.

A major malfunction is none of those things. It’s a material deviation from game play that affects what you, as a player, can achieve and whether anyone else can, too. If you can’t start multi-ball, can’t finish spelling a word, can’t get the ball out of the scoop, then these are major problems. The game isn’t the standard game anymore.

The verbiage can be circuitous because it’s based on so many different rulings over the years. I have tried to break it all down in my Rules Walk-through videos in the Videos > Highlights section of www.twitch.tv/pinballandcancer. Please check them out.

I feel like the IFPA rules do not provide sufficient guidance as to the distinction of when a game should be considered broken, particularly with regard to a game in progress such that the game should be voided.

Here is some perspective from Mark Steinman @mhs from another thread but is relevant here:

Just my 2c, but in my experience, players too-often seek to apply malfunction rules to what is just a broken game. Someone recently mentioned a similar situation to me where an outlane on AFM triggered strobe multiball. In both of these situations, the game is broken. Whether it’s the software or the hardware doesn’t matter, it’s messed up, and as unfortunate as it could potentially be, the fix in those cases is turning it off and back on. The malfunction stuff is mostly there to address specific loss of ball scenarios, double-switch hits, or other easily understandable beneficial oddities created by a properly functioning mechanical game.

There’s several lines of logic in the PAPA / IFPA rules that could lead to a TD safely making this ruling, but the most clear that I know of is the first paragraph of Disabled Machines.

Any tournament machine that breaks down during play will be attended to by technicians as promptly as possible. In the event that a breakdown is severe and cannot be repaired promptly, the machine may be taken out of service temporarily or permanently. A permanently disabled machine may be replaced with a substitute by tournament officials. If the failed machine is eventually repaired, it will be put back into play.

Yet again this leaves it up for debate as to what constitutes “severe”.

There is no way to codify the significant advantage stuff. Same holds true stuck ball ruling that can void a score. It will always be a judgement call.

No matter what it is going to be unfair to someone. Don’t trick yourself into thinking that voiding the game is more fair, because if balls were played you might be harming or benefiting that person by voiding. I think you should start from a default of play on, and then explore how bad the imbalance needs to be from there to through out an in progress game.

By extension it seems like you may be advocating for “as long as both flippers work and at least one switch scores then ‘Game on!’”

This may be the best answer and it is certainly the simplest to implement, but I’m not sure I like it. And I do think the rules could address the question more specifically.

This may be the best answer and it is certainly the simplest to implement, but I’m not sure I like it. And I do think the rules could address the question more specifically.

some rules do conflict or seem to be written in part for tournament FORMAT X as part of an basic rule set
they also need to add an
An Beneficial Malfunctions part with an significant disadvantage part.

Let’s say there is an game that starts balls with multi ball and one player does not get that on start then that should cover that and override the loss of multi ball rule.