So, it’s hard for me to admit that I don’t think I’ll ever produce this machine, but that’s exactly what this post is. So now, I am going to put the idea out there, and if anyone thinks they can make it, I’d love to play it.

Basically, what is the idea?
The idea is to blend pinball and music in a way that hasn’t been done. For years, the only music in pinball is in the background, but I want music to be part of the gameplay. (Not choose a song and shoot that song’s shots–that’s a mode) Rather, play with the music (add instruments, speed it up, slow it down).

Specifics:
The layout would be a flow game layout - ramps, orbits, and [a horseshoe or 2 ball return mechs like Iron Man] in the center. I see it similar to the stern star trek or afm layout. Ramps would feed the inlanes and orbits could feed pops, continue back to the flipper they were shot from or return to the other flipper depending on the game situation.

Game Play Concept:
For licensing purposes, I had elected to go ‘classical’ with my music, but this idea isn’t limited to a classical. 3 Artists (composers) would feature in the game. I saw it as Bach, Beethoven and Mozart. The player would choose an artist and the game would start with a simple version of one of that artist’s “songs.” A player would play through the song, adding instruments to the piece by completing combos, and speeding up or slowing down the song by hitting the horseshoe or the proper ball return feature. The song would play through decent speakers via a MIDI controller. These would be the major expenses, the speakers and the hardware/software necessary to play the music.
Multiballs: There are three two-ball multiballs but a player is only to achieve one per play-through. Two-ball Multiball starts when a player completes two artists. For example if a player chooses Mozart at the outset, completes Mozart’s song, the selects Beethoven and completes Beethoven’s song, a two-ball multiball begins:
Mozart V Beethoven: It is a mashup of the music of Mozart and Beethoven, and will feature one or the other more heavily depending on the shots the player focuses on. A player can speed up the tempo or slow it down with shots to the center.
Three-ball wizard mode: Similar to the two-ball multiball, but now we’ve got three artists in the mashup.

As for general layout and some very basic gameplay, that’s as far as I felt I needed to get to know I wanted to play the game. Other features:

Lighting-with LED’s a wide range of lighting is available to the designers, and I sort of saw the lighting going with the music – starting basic and ramping up as instruments were added and the tempo changed.
Feedback-depending on cost, the game might need a nice screen (if the additions I am about to propose were to be added), but in the form above it would be fine with a DMD.

Customization-originally I had intended allowing people to add midi music to their machine, and having a somewhat open source to the shot logic so that they could program their own combos for adding instruments. The people I spoke with about the game thought that might be too ambitious and proposed limiting the game to the Mozart/Beethoven/Bach theme. I am putting this idea in here because it was part of my concept for the game, and I think it might be a real selling point. Plus, if people wanted to they could share their midi program and shot logic with other owners making for a neat way to keep the game relevant.

Drawbacks: My view of the game doesn’t really stress points. It’s probably not a tourney game. I’m sure there is a way to make points fair and keep the game fun, but the music aspect of the game isn’t really something that features in a competitive setting, as the volume is likely to be turned down. (although bluetooth is an interesting option if you wanted to go that route) This game is probably for locations and homes, but not necessarily the tournament hall.
I’m not sure about costs, we never mocked one up and didn’t get very far. It might cost a lot to do the things I suggest even though I don’t see the costs being prohibitive.
I’m probably not explaining things very well and I’m purposely not sharing the long write up that I took to meetings, so I’ll happily answer any questions about my idea.

It goes without saying that since I shared it here, the idea can be taken by someone else. I’m fine with that, since I don’t think I’ll ever make a pinball machine (I lack all knowledge of the mechanics of a pinball machine). I still want to see it made, because the current pinball-music connection is superficial at best.

I’ve got a few ideas on how to integrate points into this without ruining the aesthetics. For instance number of instruments playing could be a form of playfield multiplier [not 1-to-1, flatter than that]. Tempo-matching could be another aspect, i.e. you can change speeds but score the most points for times when the speed is either “normal” or what your game-start-selected target pace is. Combos and specific sequences can be made more valuable than single shots, and harder shots more than easy ones.

Hmm, what about instead of a hurry-up being more for quicker, make it more for “correctly rhythmed.” The more accurately you time your shots to match the music, the higher your score. Kind of like the machine is the conductor, you’re playing the piece, and the better you match the correct musical score, the more points you get.

Love it!!! A good buddy of mine works in the synthesizer industry making euro rack modules and always has some wacky ideas along these lines everytime i see him!! https://www.supersynthesis.com/

In our game basically everything has a pre programmed sound which can be altered by a control panel (arpeggiator for stand up targets, wave form adjustments for pop bumpers, etc) and things like a pitch bending knob for when your on a ramp wireform.

This too wouldnt really be a pinball game but more of a fun way to play different pieces of equipment with a pinball.

Calling @GarrettHays to chime in!

What on earth is going on there?

What on earth is going on there?

Sound artist Lucas Abela from Australia has made some pretty wild concept pins over the years. Most of the ones I’ve seen involve various types of sound triggering while being played. Great stuff, way out of the box. 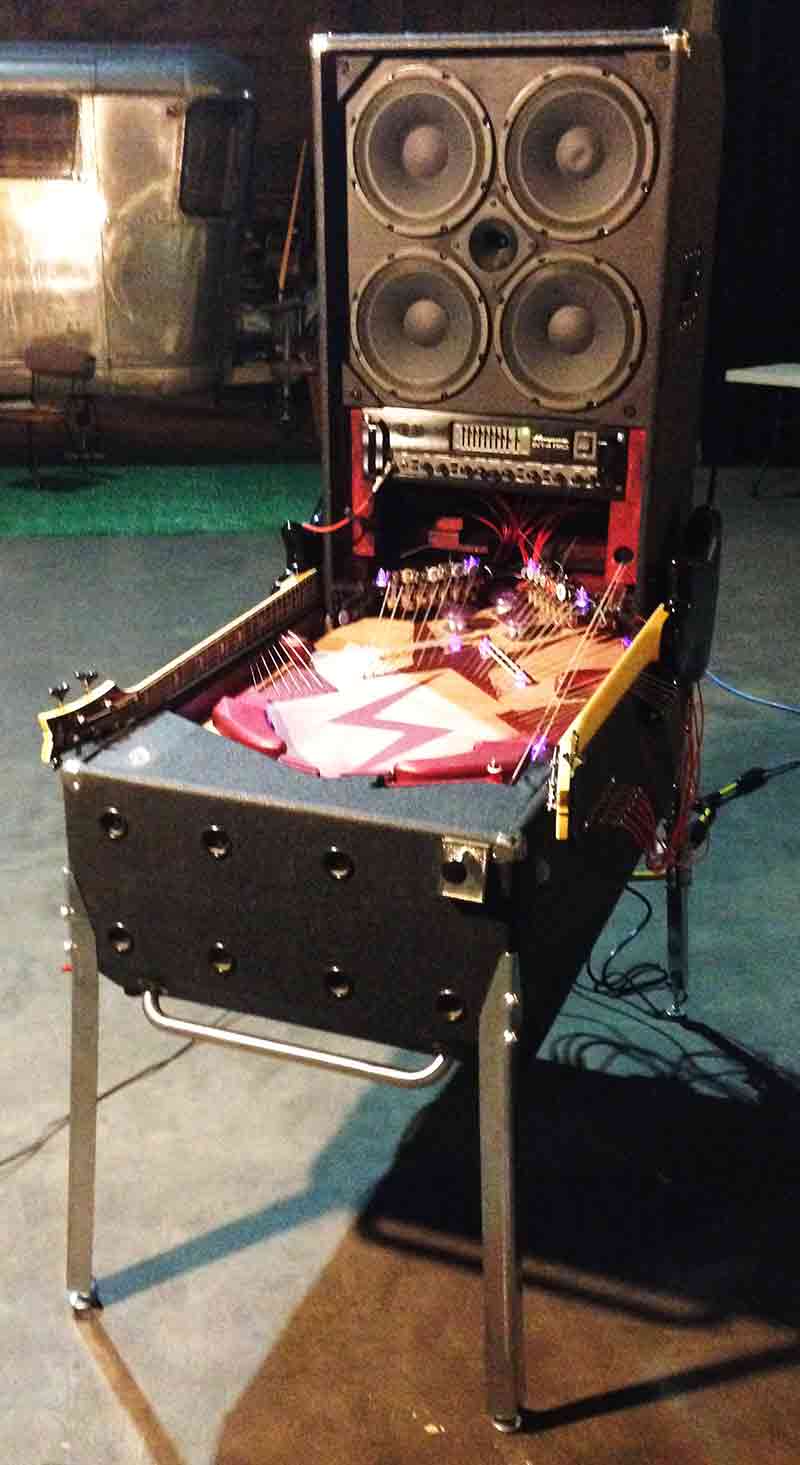 Sure beats me and Jeffro spending part of Saturday at Finals trying to decide what features our planned Velvet Underground machine would have (‘eight ball’ multiball, syringe plunger, Nico only featured on the LE, playfield area filling up with smoke, ‘I’m Waiting For My Man’ ball locks, ‘What Goes On?’ bank of drop targets)…

Hadn’t seen or heard of BassBalls. Sounds like its about to feedback and deafen people while they are playing it lol.

I do modular synth stuff and was thinking about using switch hits to advance a sequencer. Different targets could alter quantizers or tones. The randomness of pinball would be welcomed in a ‘generative’ synth patch.

for sure!!! plus it would be so sweet to rip a spinner right on the beat or something like that!

Sounds cool. Will this game go on location?

Customization-originally I had intended allowing people to add midi music to their machine, and having a somewhat open source to the shot logic so that they could program their own combos for adding instruments.

There is an arcade DDR type game called In the Groove 2. It came equipped with a USB port so that players could upload their own songs. Kids being kids, someone made a song where every successful tap of lit button would make the game broadcast a swear word everyone in the arcade could hear. Once they memorized the song, it was a constant stream of filth and foul coming out of the game. Like the swear MB on Sopronos. Every switch launching bombs.

I would be in the mall theater arcade playing pinball and a 12 or 13 year old boy would come in, upload the song, then play it and run out of the arcade. I think the game allows like 2 minutes max per song. More than once, mall cop showed up a few minutes later. I found it extremely amusing. Something I would’ve done when I was younger if there would’ve been USB ports on El Dorado and Bow and Arrow.

A couple things to respond to what’s been presented:

Originally, prior to meeting with others, I kind of did see the game as a DDR pinball (with a set of repeating bars until shots were made), but that wasn’t really easy to implement according to the others I spoke with. So we morphed it into adding layers and playing with tempo, and the more I explored that the more I liked it. Midi allows users to mute/unmute channels and ramp up or slow down tempo and it’s all pretty easy. I picture the player more like a conductor of a symphony than a player of an instrument.

I didn’t picture the addition of music taking place at a USB port that anyone has access to, more like code updates on Stern where someone with a key is needed to do it. Owners/techs are the gatekeepers of the music.

Finally, I know that the idea can/will change now that I have shared it, I just want to clarify how I saw it.

I have also seen this: