Are your skills sharpened for battle?

Legends of Valhalla, designed by Riot Pinball, is the 4th American Pinball title. Legends of Valhalla is an immersive pinball machine which brings the player into the world of the Norse gods and other Viking mythology. The game is a standard body design, utilizing three flippers offering a variety of fast and unique shots, including 3 metal ramps. The game rules have a variety of objectives that the player must either start or complete as they work their way through the game attempting to not only reach the wizard mode Valhalla, the majestic hall of dead Vikings, but also advance to the final epic battle known as Ragnarok, the super wizard mode.

Legends of Valhalla has 16 intricate modes programmed in the form of Viking legends for players to explore along with many multiballs and several mini features that are unlocked during specific actions while playing the game.

The game also exhibits a couple of fun playfield features such as the Kraken, which grabs the ball via a hidden magnet mounted underneath the playfield and flings it around in chaos. Also featured is a Viking ship where the player builds their army by locking balls inside to begin multiball play. Additionally, Thor’s hammer, which is mounted on the back panel and activated by a 3rd flipper button, comes crashing down onto the ball which is held by a magnet just over the top lanes, simulating a dramatic lightning strike, adding to the gameplay experience. 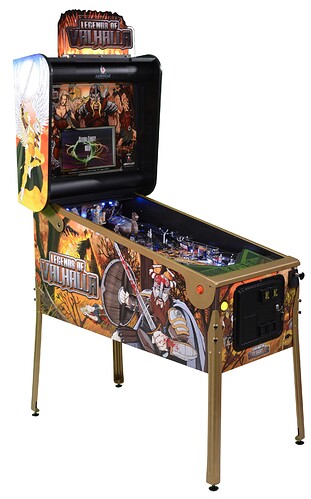 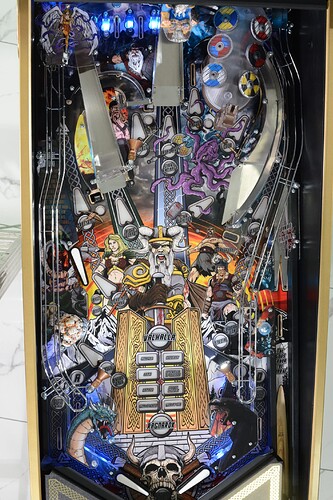 Hit Berzerker to add 10 seconds to the timer.
War on Land can be played unlimited times during the game. After all 3 characters are battled, the 4th and subsequent character is random and adds increasing value to each war on land. Each completed shot increases the base value. Higher scoring in version 22.07.27 and later.

To qualify locks - hit 3 purple lit side targets or qualify by mystery award
To begin - Lock 3 balls in the ship (or 3 virtual balls if physical locks disabled)
Can stack with any battle. stacked battle resumes when war at sea ends.
Complete 6 shots, then right ramp is super jackpot.
completing the super jackpot extends war at sea for another 6 jackpots/super.

Viking MB is the second and subsequent times you lock balls in the ship.
It differs from WAR AT SEA with more shots and no ability to continue after the superjackpot.
LeftOrbit
LeftRamp
UpperOrbitLeft
UpperRamp
RightOrbit
ShooterLane
MiddleRamp
Spinner
UpperOrbitRight
Viking MB jackpots are progressive with the 22.07.22 and later code.

RAGE
To qualify: 2 completions of blood/rage targets lights shields of the gods kickbacks,
save a ball and get 1 step to rage qualify and add blood to the axe onscreen.
(progress carry over ball to ball)
enable shield of the gods again and save a ball and get another step to rage qualify and more blood to the axe. Do this a total of 4 times to qualify rage and fill your axe with blood.
Rage starts with a 6 ball multiball frenzy
there are 4 villages to destroy. 6 shots per village
complete all 6 shots and get add-a-ball and another village.
complete all villages to end RAGE or drain.
teal/green/yellow/purple arrows for villages 1-4
Shots:
LeftOrbit
Spinner
MiddleRamp
ShooterLane
UpperOrbitLeft
LeftRamp

WAR OF THE CLANS
Hit the blood/rage target 4 times to start this hurryup.
Random award is generated at start: Points, Weapons or Warriors
Shoot the random green shots to score the award. you have 10 seconds to hit as many shots as you can
Hit the berzerker during the hurryup to get different shots (3-4 shots each set)

RAMPAGE
Spell Rampage by hitting the center ramp (R-A-M-P-A-G-E) outside of any other running mode.
Timer starts, all shots are lit.
Hitting a shot awards 1X for the shot and restarts the timer. Hitting another shot awards 1X for that shot and restarts the timer. If you hit the same shot twice, award 2X the value and restart the timer. If you hit the same shot three times, award 3X the value, restart the timer and extinguish the shot.
After a number of shots are completed the Berzerker target will pop up. Hit the Berzerker to rest all shots to 1x. Each completed shot increases the base value.
RAMPAGE can be called an unlimited time during the game and you continue shooting until you miss a shot and the timer runs out.
Rampage base value grows with the 22.07.22 and later code.

BATTLE HELPERS - THORS HAMMER and VALKYRIES
Get Thors Hammer by hitting the spinner 100 times. When obtained, press the action button
to defeat a legend* during battle or score points outside of a battle.
(*except THOR who can’t be defeated with the hammer)

Summon a Valkyrie by: performing 5 combos or getting it as a mystery award
Use a Valkyrie during a battle to score the next shot** to get one shot closer to defeating
(**except Dearg Due who is defeated with a valkyrie)

Wizard Modes:
VALHALLA: Single ball play, 60 second ball save
qualify by completing all 8 tasks. shoot scoop or shooter lane to begin.
you must collect all 9 weapons to and deliver a final blow at the center ramp in order to defeat ODIN
Shoot left ramp to light a weapon, shoot the weapon shot to collect it. A second visit to Valhalla (with increased task difficulty) is possible if you do not defeat ODIN the first time.

RAGNAROK - 6 ball play. 60 second ball save
Play all 16 legend battles to qualify Ragnarok wizard mode
3 levels for this wizard mode. 19 shots/level
every shot in the game is lit a level color (purple/aqua/red)
shoot all 19 shots for the next level
complete all levels to complete Ragnarok or drain to end it. 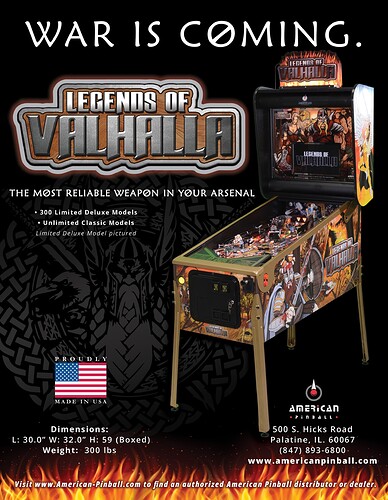 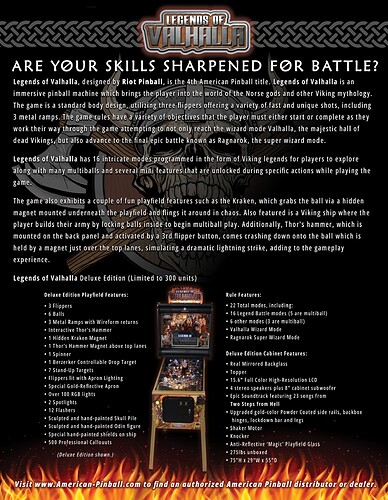