Is this a bingo machine?

I’ve been seeing Copa Mundial (“World Cup” in Spanish) at the Lake Forest Ice Palace (in Lake Forest, CA) for years now, and while it’s occasionally moved to the Aliso Viejo Ice Palace (in Aliso Viejo, CA, of course), it always felt noticeably different than anything else around it. Only recently did I get around to taking a photo of it. Sorry for the glare; I was still trying to learn my camera settings: 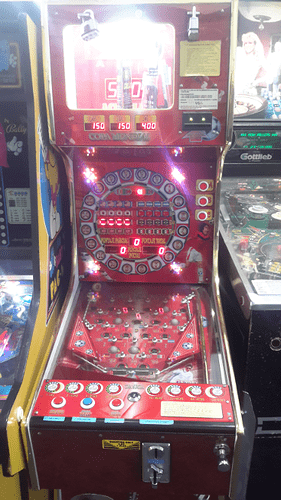 Here’s a picture of the playfield: 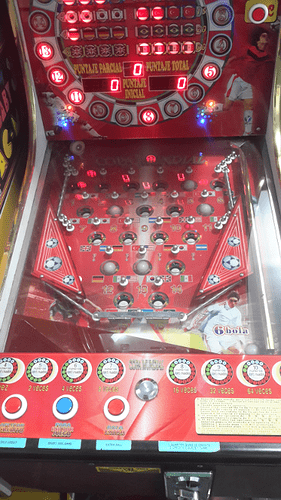 I thought bingo machines weren’t allowed in the United States anymore,or are they just not allowed under certain conditions? This one gives out prizes, though they’re cheap stuff like glow sticks and car air fresheners. There was one time that I saw it just dispense all of the prizes each time you pushed one of the buttons at the bottom.

I also heard that bingo machines were primarily made in Belgium as they went solid-state. This one is definitely in Spanish, though I wouldn’t know if that means it was created in a Spanish-speaking country or simply intended for a Spanish-speaking audience.

Totally is a bingo machine! In this case since it’s a redemption game, so it’s not doing anything wrong. The gambling aspect can be done similar to how slot machines work, and older bingos or other gambling games disguised as pinball machines.(Bally made this one in the 50s where the playfield was basically a roulette wheel. The backboard had a score reel that increased randomly, along with chimes to throw off suspicion. When folks had bet and needed to cash out, they’d hit a button that would activate a knocker and the barkeep or whomever would come over.)

Agree to disagree ChubbyGoomba! Not a bingo to my eyes. Playfield size and shape is one thing, another is using ping-pong style balls and changing the cabinet to make it difficult to shake.

There are games that Bally made that utilized a wheel on the backglass (Magic Ring, Big Wheel) and United was the only manufacturer I knew that made the roulette style playfields. Those roulette games had a pop in the center. You still have a modicum of control, but much less than on a Bally standard 20 or 25 hole playfield.

I’m on the road right now, or I’d post links and such. Do you have a pic or other of the machine you describe? I’ve not heard of that one.

True bingos are made in Belgium, and utilize the same 25 hole playfield that Bally popularized in 1951.

This teeny game is just a gamble, no control. Again, my opinion.

As far as legality. This is an ongoing question. The Johnson Act as initially drafted made the one ball games popular in the 40s illegal. The amendment made it illegal to transport across state lines if a gambling device.

The states control legality of owning or operating. It is still legal to operate bingos in Missouri. There are likely other states.

Owning is largely fine. There are likely exceptions.

If it’s not a bingo machine, then what is it?

The balls are not ping pong balls, by the way. Based on their texture, the way they feel, and the way they move, I’m pretty certain they are solid and ceramic. They are WAY smaller than normal pinballs however.

The wheel in the back only indicates to you which holes have a ball in them, which are numbered 1 to 21. I never figured out if there’s any significance to them being in a ring formation, but I do know that the flags are significant. To the bottom-left and bottom-right of each hole are pictures of flags. Each time a ball lands in a hole, one of the lights on the backglass for both of the flags will light up. Copa Mundial has flags of the United States, Argentina, Korea, Turkey, United Kingdom, Germany, Mexico, and Brazil, and there are four of each on the playfield. If you can get all four of a country’s flag to light on the backglass, you are given a lot of points and you can immediately win a prize.

The next time I’m in the area, I’ll take more pictures of it if it’s still there. Anything you want me to take a photo of in particular? These photographs were greatly scaled down in size, so I can show enlarged areas of these if needed, like the text on the…apron-like thing or up top. (I can’t take pictures of the sides or back of the machine, of course, since it’s between a Baby Pac-Man and a Monte Carlo.)

I actually took that photo earlier this year. I know the operator cycles through these machines (Monte Carlo being one that takes long hiatuses, which, from what I’ve read, is because it gets critical malfunctions frequently), but I have never seen Copa Mundial NOT at one of the Ice Palaces. When it’s at Lake Forest, it’s to the right of Baby Pac-Man (which is always there). When it’s at Aliso Viejo, it’ll be in the dining area immediately right of the entrance.

I’m looking at those photos, and ALL of those machines seem to be non-redemption versions of Copa Mundial. They have identical playfields, a ring of lights standing for the holes, a mechanic where you go for four flags, and a soccer theme. Makes me wonder if this is just some shady company that’s just redoing the artwork and calling it a new release, with business owners eating it all up.

Hmm! From the gameplay it does sound like a bingo. Those ones I previously referenced, the magic ring and big wheel might be similar in gameplay.

A solid ceramic ball would be better, but still so light! Would take a while to get used to.

Yeah both of the Copa Mundials are still in both places, but the inventory next to them has changed quite a bit. I know there’s a Last Action Hero at the one in Lake Forest right now, and I feel like there was another one between now and when Monte Carlo was there, but I dunno. And the Black Hole that was in Aliso Viejo has sadly departed, only to be replaced with a powered off Gilligans Island and Hook with crazy weak flippers - which the operator has proclaimed on pinballmap to be “factory settings”.

The dishonesty is something I would definitely be annoyed about, but I’ve seen plenty of places with machines in worse condition. Far worse condition. All the other places with worse machines, though, aren’t active on Pinball Map. I’ll visit the Ice Palaces because they’re some of the few locations with many machines that are at least in acceptable condition and are open at the hours I’d normally pass on by. (I’d visit 82 and Button Mash more often, for instance, if they were open earlier.)

Hmm! From the gameplay it does sound like a bingo. Those ones I previously referenced, the magic ring and big wheel might be similar in gameplay.

A solid ceramic ball would be better, but still so light! Would take a while to get used to.

Oh yes, and I played it over this last weekend, and I forgot one more thing: If you have three of a particular flag, the holes where you can get the last flag will then blink with those colorful red and green LEDs, to let you know that those are the winning holes.

It also turns out the holes are numbered 1 to 16, and the remaining spots on the wheel are trophies. If you can get a ball into all four of the holes in the middle row, that counts as a trophy won, which also wins prizes.

Here are a few more photos I took while I was there: 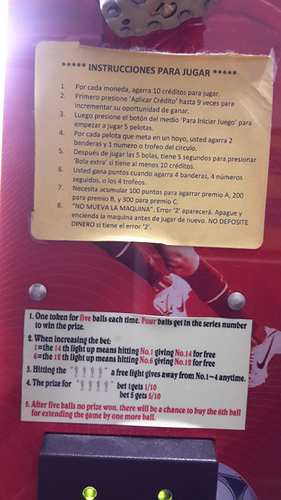 aw9KC5b.jpg367×653 129 KB
These are the rules, of course. On top is in Spanish, though when I played, they didn’t seem to match up. On the bottom is a Spanglishy, truncated explanation. My Spanish isn’t the best, but here goes:

The Spanglish instructions also says that lighting 1 or 14 will also light the other, and same goes for 2 or 12.

Here are the prizes. There is no distinction between prizes A, B, or C in their worth. 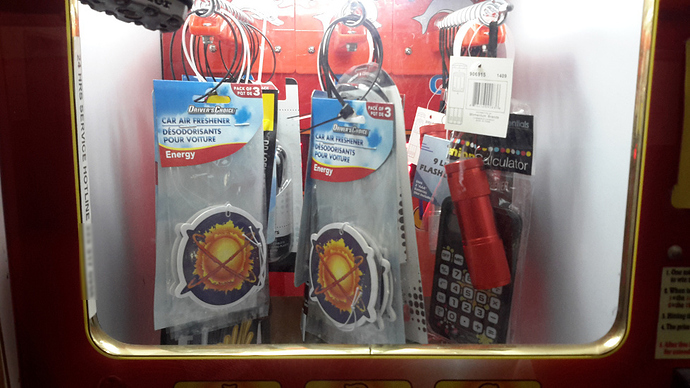 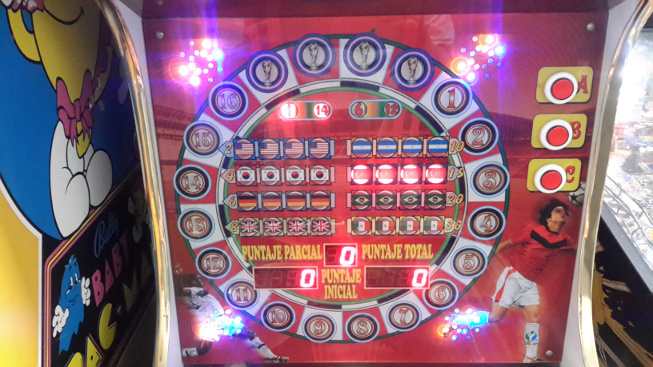 Whew! Some interesting rules - here’s my bingo-ese thoughts about the ruleset/game for whatever that’s worth (nothing):

I have thought about the best way to convert a bingo to a redemption game. I think if you tied the replay register step up to a ticket dispenser, you would get a 1/1 ticket ratio (you could also put in a switch on the back of a payout cam to get 1:2 or 1:3, etc) When the search index is released (winner finished), you release the red button relay and power the replay reset relay. During replay reset, the game cannot coin, and you’re left with a clean slate every time without having to call an attendant to power cycle the machine. It could also happen on timeout - but this is riskier, since someone could play for free if they were quick.

Anyway, I fully stand corrected - this is a type of solid state bingo. The playfield size/layout (the space between the holes is just as important as the number of holes) and size of balls are irritating from my perspective.