I’ll be directing the Intergalactic Pinball Championship at ReplayFX for 2020. A brief survey was posted online and I figured I’d post it here as well. Take this survey powered by surveymonkey.com. Create your own surveys for free.

I’m placing a heavy emphasis on making numerous improvements and have already been working hard with Replay staff with the feedback I’ve had so far to make this year’s tournament the best one yet.

If you participated and have a few free minutes, please consider filling this out!

It was perfect! Don’t change a thing.

But seriously, there was too much interest which caused really long lines.

I did start trying to qualify on Friday night after Round 10. I wasn’t initially planning to do that (because usually people are exhausted at that point), but Round 10 happened to be my best round of Pinburgh so I thought I’d ride the hot streak.

Had I not already played half of my entries on Friday, I almost surely would not have gotten them all in, and I might have skipped it all together once I saw how long the lines were on Saturday morning.

I do think it must be limited entry for it to work. So all you can really do is expand the bank, and/or have it available between rounds (which of course presents lots of challenges and risks).

This has become a common theme in the feedback received so far. We’ll get it squared away. =]

Totally agree. I didn’t play at all because I knew the lines would be nuts. So if it makes sense, definitely increase the bank size significantly and hopefully you have the manpower to help with that.

and hopefully you have the manpower to help with that.

I haven’t haven’t done much scorekeeping at tournaments because it’s often something like one free entry for taking a shift…and the hourly rate isn’t great when considering travel expenses and a limited amount of time at the event.

However, if scorekeepers get their own exclusive hour of qualifying time, then it suddenly becomes very appealing…particularly when the lines were insane the previous year. Of course, I know this isn’t always feasible.

scorekeepers get their own exclusive hour of qualifying time

The schedule had two separate one-hour qualifying slots for scorekeepers last year. We will definitely be keeping this, but it may look slightly different on the schedule (pending some recommendations I’ve made).

The schedule had two separate one-hour qualifying slots for scorekeepers last year. We will definitely be keeping this, but it may look slightly different on the schedule (pending some recommendations I’ve made).

Oh nice! I didn’t realize this.

Then I would say you should have no problem finding more scorekeepers if the bank gets expanded.

I certainly hope so! Great job on commentary this weekend. It was a pleasure to watch/listen.

Congrats on being named the Tournament Director! I filled out the survey.

One item that I wanted to post publicly with the thought of soliciting feedback would be the use of traditional PAPA Best Game scoring of 200-190-185-184-183…etc.

From my quick checks against last year’s event, I saw that each game was played about around ~200 unique players. (https://www.neverdrains.com/ig2019/playerIndex.php?disp=game&sel=IPC&game=17)

My personal view is that only rewarding the top two competitors bonus points on a field of 200 (1% of the players) is too narrow, especially when there’s a big percentage difference between 1st and 3rd.

At PinFest we’ve been using what I’ve coined as “97.5% Modified Decay Rate” which rewards a score in the Top 12 with an ever-increasing set of “bonus” points the further you go up the chain towards the top Spot. We’ve used the above scoring for two years. I’ve had some positive feedback on it and thus far no negative feedback (at least not any that’s been brought to my attention) and we plan on using it again in 2020. The goal is to try to incentivize going for a Top 12 score, which usually is a Top 10% score for the number of players per game at PinFest.

The hybrid that I’ve been playing with in Excel would be what I am calling the “97.5% Decay Rate + 300 Base Points” proposal. A very simple name that rolls of the tongue.

Presented graphically as a percentage of points the Top 20 positions have as a function of 1st: 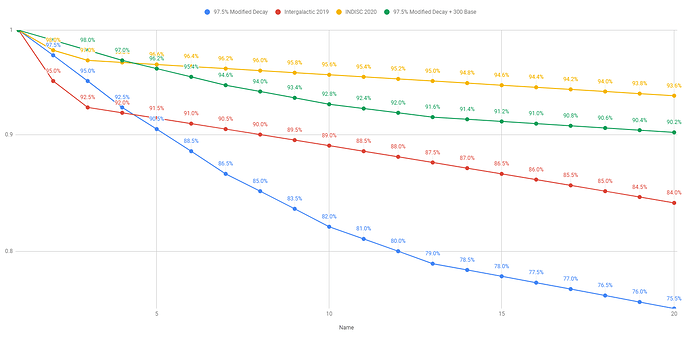 If there’s a problem that I see, it’s that I think that the bonus points put an unbalanced emphasis on getting either 1st of 2nd on a game (the big dip on the Yellow and Red lines) and I think that there are more optimal ways to grade out the points to award a higher percentage of the top players, especially in a tournament of this size.

Of course, the numbers can played with to find other configurations to attempt to incentivize play for something between the Top 1% and Top 10%.

Alternatively, forget everything I said above, throw out any bonuses at all for 1st and 2nd performances, and do a straight-line depreciation.

It would be interesting to see if a change in points scheme would majorly shift the competitors who were in or out. Hard for me to do without doing a game-level extraction at the moment.

Wrapping up, I love how this tournament has shaped up over the past few years and each year continues to get better (and not surprisingly, more popular). Smoother registration, more qualifying time, easy-to-use interface with NeverDrains. Looking forward to the event in 2020.

I think it would be fun and exciting to make this a “go for broke” format where only the top 20 scores per machine get any points at all. Make it like this:

Encourage everyone to go for a GC-type score, none of this “I have 3 good games, what’s a ‘safe’ 4th game for a just-not-terrible score to get me qualified.” Hey, this is supposed to be INTERGALACTIC. Aim HIGH!!!

If that’s too extreme, maybe take the top 30 or 40 scores, but you get the idea. The fact that you might have 100 of the 500 people “tied” at zero at the end is really irrelevant; once down that far in the standings, your finishing position is determined more by how many games were played on the machines you chose than by how well you did, e.g. are your 4 bottom-quartile places out of 200 games played on the machine vs. 150 or 250?

Any chance to use scorbit for getting the scores so that the score keepers can just show the player their score and the player hits accept. I think that would make the que move quicker so that they don’t have to enter the scores manually.

Encourage everyone to go for a GC-type score, none of this “I have 3 good games, what’s a ‘safe’ 4th game for a just-not-terrible score to get me qualified.” Hey, this is supposed to be INTERGALACTIC. Aim HIGH!!!

and that may be bad for the IFPA value + limit the Finales % cut as people who don’t make the count don’t count to the half cut off.

No, you still take the top 10-15% of players for the playoffs, just using the narrower point scheme. No WPPR problem at all.

If lines are long you can reduce entries from 10 per player to 7-8. Another idea i was thinking was to make it card based and you get 2 cards. That would give it an OG papa feel.

Thanks for all of the kind words!

I can say with confidence that a lot of the potential changes and ideas that I’ve had over the last couple of weeks are aligning almost identically with tthe feedback given in this post and in the survey.

@coreyhulse you never cease to blow my mind with your stats and data. Almost all of it always belongs on r/dataisbeautiful. I really appreciate you taking the time to write that up. You and @bmu have some really intriguing thoughts on how we might be able to change up the way we do scoring and it’s definitely something that should going to move up my priority list to take a much closer look at.

That’s definitely something worth looking into. I’m not sure that we’ll be able to pull it off this year. I have to admit I’m not super familiar with what goes into making those work, so I would need to confirm all of the setup requirements for the Scorbit system and confirm we were able to accommodate them.

Great idea, though, and something I’m definitely willing to explore.

I really enjoyed this last year and despite of the queues the key thing was that the tournament was inclusive for everybody. That should be a key item in the future.

This would add nearly 6 hours to the existing 19 hours in the schedule, or roughly 30% increase in the tourney’s “capacity.”

Great feedback. I’ve recommended very similar schedule changes - just waiting to see what’s feasible and what might not be. Thank you!

I lost my voice after yelling for the next up player. I would greatly appreciate a speaker.