Delaware will be crowning its first ever Pinball State Champion on 1/20/18. Details below.

Tournament Date: January 20, 2018
Where: Wilmington Home Amusements - 14 Germay Dr. Wilmington, Delaware 19804
Event will be from 1pm-5pm. Food and beverage is allowed to be brought to the location. $10 coin drop fee(admission fee as all games are set to free play)), plus $20 tournament fee.

We will be following the rules put in place by IFPA for the State Championship Series.

Head-to-Head Single Elimination Format
Players will be placed in a single elimination bracket once the seedings have been completed.

Each match will be a best-of-seven. The higher seeded player will have choice of machine or position for the 1st game, with the loser of each subsequent game having choice of machine or order, until someone has won 4 games. A machine may not be played more than once in the same match unless there are less than 7 machines available. If that is the case, only after all machines have been chosen can either player select that game to be played for a second time within the same match. Once a player verbally announces their game choice, or chooses position, that decision will be locked in and cannot be changed.

Each player will have the opportunity for 30 seconds of practice time before starting every game of every match. This is to ensure that both players have a chance to get familiar with the machine.

The winner of the match advances to the next round, while the loser is eliminated.

The 3rd/4th place Consolation Final will be played as a best-of-three instead of a best-of-seven like all other rounds, using the same rules. All other finishing positions will also be played out in best-of-three matches to also determine 5th through 16th place.

Additional information for everyone regarding the State Championship. I went onsite today and met with Scott to get answers to all the lingering questions. I believe I covered everything, if not please let me know.

Below is a list of games he is working on that may be included:

I think that covers everything!

Full results are below. Delaware decided to play out all 16 positions, so the official standings are below: 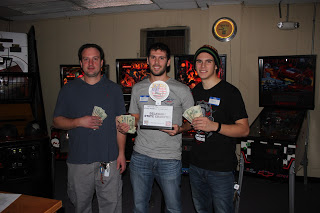 Bracket for how the positions played out: