How to fix drop targets that don't drop on a hard hit?

I’ve looked on Pinball Help on YT, and I didn’t find anything that matched the description, so I’m curious what I can start trying to make the drop targets on a Stars go down more reliably on hard hits.

To be clear, an indirect hit, or a direct hit split between two targets works pretty reliably, but a hard, square hit to a single target just bounces off, and I’m not sure how to start addressing that.

Lots of trial and error and I don’t think anyone has found something that works 100% of the time.

Are they original drops, or repro?

I’ll throw a couple techniques into the thread…

Make sure the rubber behind the drops isn’t too loose or fat. If the rubber is sticking out a bit too far the drop will bounce off of it before it drops.

Try a looser or a stiffer spring. I’ve had both work, it just kinda depends.

Make sure the entire mech is mounted so there’s room for the target to drop. I’ve seen mechs that were twisted just enough that a target on one end of the channel had less room to fall and so it would bounce more.

Make sure the entire mech is clean from grease, oil or dirt. I typically disassemble the drop banks and polish the rod using a good corded drill. This piece gets super ashy and people grease them sometimes. Having them shiny and clean always help the drops work more efficiently.

I’ll throw a couple techniques into the thread…

Make sure the rubber behind the drops isn’t too loose or fat. If the rubber is sticking out a bit too far the drop will bounce off of it before it drops.

Just experienced this. Recently got a Joker Poker and 2 of the 3 Queen drop targets would not drop on direct hard hits. Tried numerous things, none of which worked. I had someone else look at the issue and they noticed the rubber was the wrong size!

Whether the targets are new or old, it never hurts to polish them with Novus 2. Cleans them and makes them slightly more ‘slippery’. New or old targets, you absolutely have to disassemble the whole mech and clean everything not plastic with alcohol. Works miracles. New springs at a minimum.

I don’t think Stars used a plastic ledge like later Stern’s, but if it does, polish that with Novus too.

I can’t picture it, but if the ledge can be polished with a slippery metal polish, it’s worth doing. I use and recommend Blue Magic polish. Leaves a slippery (protective) film of silicone behind. You can feel it with you finger. Great for stainless lane guides too.

Make sure the entire mech is mounted so there’s room for the target to drop. I’ve seen mechs that were twisted just enough that a target on one end of the channel had less room to fall and so it would bounce more.

i found it very important to have your drop target flush to the front of the PF hole, to allow maximum amount of space behind them to recoil when hit and have have time to be dropped by a strong new spring.

I’m curious if we know why the Bally brick happens (I know Stars isn’t Bally–just what I’ve called this phenomenon regardless of the game). Any super slow-mo video? 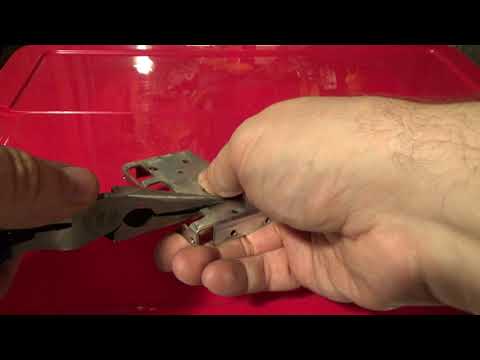 Not a slo mo of the cause but something I tried on mystic’s center and right banks (center bank bricked terribly) and it reduced it. The center drop of the center bank still bricks occasionally but no where near as much as originally. I have a mix of various vintage targets in my banks though so that might make a difference.

I was looking at the differences between classic stern banks and bally’s and noticed that the ledge the stern banks rest on are angled up, so that as soon as any downward motion of the drop occurs, the spring will pull it down (hopefully!) - the bally, being flat, would let the drop bounce off the rubber ring/back of slot/drop made with wrong materials/etc and come back to the shelf.

The Stars in the OP’s question probably has flattops in it, which exacerbate the issue as the slot and bank were designed with the chichlets, but the other responders posts are all valid ways to try and mitigate this.

This was definitely part of the problem! I just tried tucking the rubber behind the posts as a means of testing, and I definitely noticed a lot fewer bricks on direct hits: 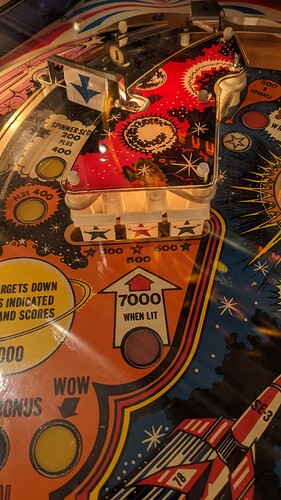 That said, now the ball is getting stuck on the hole, so this is definitely only a temporary workaround until I can determine where to find a thinner band (if anyone knows what to look for on Marco or Pinball life, I’m open to ideas!)

My stars rarely bricks so I’d try another method. I have those same repro drop targets too.