I just created a new organization called the First State Flippers. All future events will be promoted through Facebook and possibly Pinside/Tilt. I will probably stop sending out emails, so please keep that in mind. The main Facebook page can be accessed by visiting the following link. Make sure to follow!

Event #2 for Delaware is the “First State April Affray” being held on 4/28. Tournament spots are only reserved by Paypal deposit of $10 to djreddog@gmail.com. Facebook event and details are here:
https://www.facebook.com/events/151301978903766/

Event #3 in Delaware is the “First State June Jam” being held on 6/9. NOTE - The June Jam tournament will be capped at 36 entries due to space restrictions. Tournament spots are only reserved by Paypal deposit of $10 to djreddog@gmail.com. Facebook event and details are here:
https://www.facebook.com/events/1939243606105497/

Had a security issue with Facebook on Monday, so I had to create an all new First State Flippers Facebook account as well as events. Original post has been updated with all the new info.

A couple quick announcements for everyone. We only have 6 spots left for the June Jam tournament. Also, please LIKE & FOLLOW us on Facebook. I posted a major announcement last night that should interest players near the Mid-Atlantic.

links above don’t seem to work, is there room left in April tournament?

Facebook has blocked my account for the second time. Not sure why or what is happening, never used FB before Sunday. Anyways, while I try and sort that at, I’ll update this post later tonight with all the recent news.

Facebook has blocked my account for the second time. Not sure why or what is happening, never used FB before Sunday. Anyways, while I try and sort that at, I’ll update this post later tonight with all the recent news.

Are you creating an account for this? Accounts are for people. You probably need to create a page or a group depending on what you are trying to accomplish (probably a page)

Sorry for the FB ignorance. Here is what I did the first time on Sunday. Clicked on create a page for a business or group. It then redirected me to login. Since I’ve never been on FB, I created an account. From there I was able to create the page “First State Flippers”. Setup all the info. Setup events. All was well until Monday night. I was adding a post about an upcoming event, clicked published and it logged me out and said something like

You Can’t Log In Right Now. Account disabled due to suspicious activity. Please upload a photo of yourself. We’ll get in touch with you after we’ve reviewed your photo. You’ll now be logged out of Facebook as a security precaution.

About 3 hours later I got an email from FB that said recover account. I tried and it was still locked.

Moving forward to last night, I recreated everything again. All was well until around 1pm today. I loaded up FB, and got the same damn message.

Sorry I can’t be of more help. It appears that you are triggering their risk algorithms due to the fact that all you want to do is create a page. Since you are not doing typical things like creating a profile, adding friends, etc it looks like a robot account to create pages. It will likely take 7 days to resolve by doing as they say (uploading a photo of yourself).

OK Pinballers, here is the abridged version of the major announcement I have been trying to spread to the masses for the past 3 days, however Facebook has not been kind and keeps shutting my account down for some odd reason due to “suspicious activity”.

First State Flippers was created to help promote and to make pinball more prevalent in the State of Delaware. Tournament Director, Chad Hastings, is on a mission to make Delaware a pinball hotbed and in doing so one of the first steps in this process is the creation of the Delaware Tour Championship. We believe this end of the year finale will help put Delaware on the map as a formidable place to come play pinball in some of the best tournaments around the Mid-Atlantic area and we hope the players will agree by showing their support. Below we have some information that is ready to be passed and some of the finer details of the Tour Championship will be fleshed out over the next few weeks.

Below are some numbers for everyone to see that helps show what First State Flippers is bringing to the tournament pinball scene. NOTE, all numbers are based on 36 entries for each of the 6 events. These numbers could go up or down based on participation.

Lastly, First State Flippers wants to start helping support the yearly winner of the Delaware State Championship Series by providing them with a donation of some sorts that will try and help cover some of the airfare and hotel fees accrued when going to Vegas for the National Championships. In order to give back, First State Flippers will be conducting a 50/50 raffle at each of the 6 events with 50% of the proceeds going to the winner number and the remaining 50% put aside for the Delaware State Championship Series winner. We are here to make pinball great again!

If you have any questions, please don’t hesitate to reach out. Thank you in advance for helping support Delaware pinball! 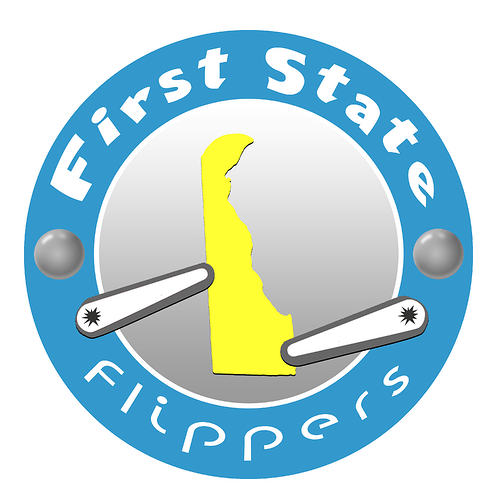