Yeah I overlooked Chris Warren and Joe Said at the $20 value. There must be more gems. I didn’t have the time to look to see what other $20 field selections might be A restricted for the pinburgh reasons (qualified in A division last year etc). As a numbers game one of the exercises I suggested was building teams with only A restricted players, whereas spending $400 on the nose is cool the former has a major advantageous purpose. I ended up drafting 1 very high upside player who isn’t, but they don’t worry me. Make a team of A guarantees and you’re ahead of 90% of the teams submitted mathematically I bet! The beauty of pride based competition though is you’re going for first mentality. Thanks for the kind words everyone, the best way to help is spread the word to your friends and local playerbases. For the record, Adam Lefkoff, you’re the man and glad to know there’s more data and statistics nerds like me.

That moment you realize you earned a 35 cent upcharge from the “Field” hahahaha.
Isn’t my 2019 Minburgh victory over Jon Replogle, Pete Hendricks and Priyanka Kochhar worth more than 35 cents? From one Bookie to another… come on!

I think it would be great fun to do a side tourney of who gets the most “value” for their money, as in what is the lowest value roster with the most points. It could be all sub $20 or a calculated mix with some from that pool and a few higher value players. Would there be a way to do a secondary roster with that intention? I suppose as an alias.

For my normal roster I had two picks sub $27 and because I am a bit of a homer and think there are two Portlanders — one who’s never been to Pinburgh — who I think will make a deep run. I picked another under $32 who was someone I played at some event or another while traveling who I recall being impressed by (and who I could still “afford.”). Still, I ended up at $398.99.

This was my very first fantasy anything, FWIW.

I’d love to see the entries if it wasn’t capped at five players with the same dollar cap. Give me a bucket of $20 scratchers! All the Adams! All partnered pairs!

This would be a good opportunity for the “value for your money” approach. Might ten $20 players surpass two top-tier ones at half the price? I can think of a few who I’d gamble would, but I think part of what limiting it to five does is balance some of the unknowns about players who are great at pinball, but just haven’t competed at Pinburgh.

Im not sure exactly what this is, but there should be a filter that takes into account whether or not a player is registered. I am not and won’t be playing this year.

Here’s a plot showing ifpa ratings against fantasy dollar value. I only included the players >$20 because it gets crowded. Lots of bargain choices below the blue line! 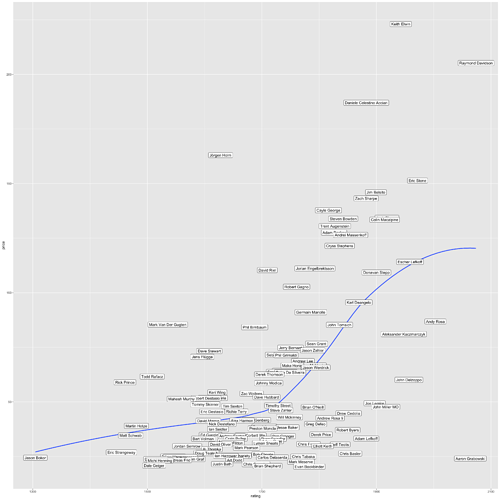 Sorry for the overlapping labels. I don’t have time to fix.

Why am I way over to the bottom right?

Because YOU SUCK!! LOL

second highest rated player in the world valued at ~$23

That is because he is an #Asshole and #Codebreaker

Last chance, get your team in ASAP!

I’m told by Timballs over 150 fantasy teams have been registered. Join the pointless fun!

Will everyone’s teams be made public before start time?

My blockbuster team of warriors is:

I got Escher, Zach, Alek, Alex Harmon, and my underrated $20 dark horse at his first Pinburgh, Andy bang-for-the-buck Bagwell.

I’m thinking that Aleksander might be on the most rosters.

Wow, two Sharpes, both exhausted from new-ish babies? Risky! I felt crazy even picking one.