I was listening to the Skill shot pincast today and they brought up a theory that bad movies make for better games. I too have had this thought (as I love BSD, Shadow, Congo, Demolition Man, etc), and have heard others mention it as well. I figured this was a pervasive enough of an idea that it was worth examining empirically.

I pulled as many games I could think of that were based on movie franchises, and looked up their Rotten Tomatoes score as well as their Pinside rating. Obviously game quality and movie quality are subjective, but this seemed like a straightforward way of doing it. Next, I made a simple scatter plot with a best-fit line. 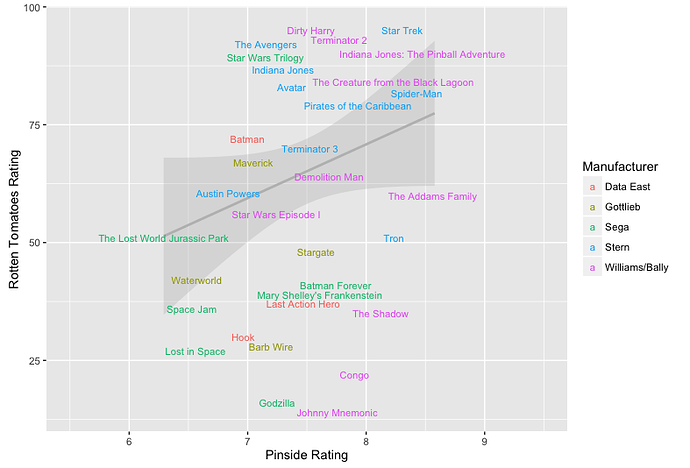 Anyways, thought you’d all enjoy this one. Happy to slice and dice the data in other ways based on your suggestions. Also let me know if I missed a game. I pulled this thing together pretty quickly.

Cool idea. I’m assuming you were just looking at DMD-era? Unless I missed them in the chart, it looks like Lord of the Rings, Transformers, Iron Man, Batman (The Dark Knight), Shrek, Bram Stoker’s Dracula, The Flintstones, *The Wizard of Oz, Starship Troopers, Goldeneye, Twister, Independence Day, Apollo 13, Lethal Weapon 3, Jurassic Park, Star Wars (DE), Star Trek (DE) are some that are missing.

It might be interesting to look at just Bally/Wiiliams, since they seem to have all the game people usually reference as being great games based on bad movies.

Ahh! you’re totally right. I actually had all of those games but for some reason they aren’t appearing. I think they share other points with games and the overlap couldn’t be resolved. Is Star Trek (DE) based on a movie? I’ll update the graph when I get a chance. Thanks!

No BSD? I’m disappointed in you… in bee’s 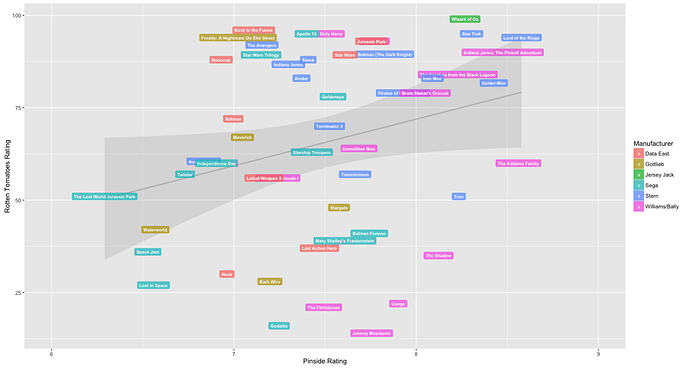 Okay, made a few changes so everything is included. There are some points that are unreadable because of overlap. I’ll try and jigger them a bit.

Amazing chart. Oh god, Lost in Space. Why does Barb Wire have such a high rating as a pinball machine, and why is Robocop so low?!?

This is wonderful work! My main takeaway is to never trust a rotten tomato rating again!

LOTR and WMS IJ on top, both ones of my favorite games and movies!

This is a great chart!

I don’t know if a bad movie makes a great game (though Shadow, Johnny, and Congo are favorites) but I do think that there’s a special sense of discovery that you get when a game with a bad theme is better than its license. The inverse is also absolutely true, if the manufacturer whiffs on a great license, the game will probably be more hated than if it was original or with a mediocre property.

This is so cool!!
I can’t believe that some silly conversation that Graham and I had inspired you to make a graph to test out the theory. I’m glad that the real, hard truth is here for us now. Thank you for taking the time to mine all that data and make this.

Why does Barb Wire have such a high rating as a pinball machine, and why is Robocop so low?!?

Heh, this is quite the chart. If it weren’t approaching 3 in the morning, I’d take a longer look at it. Will this be updated with The Hobbit later, with the average of the three movies’ Tomatometer rating?

(And yeah, there is an extremely slight positive correlation, which I didn’t expect, but it’s so scattered that it’s closer to no correlation. Which makes sense, as there logically shouldn’t be.)

I didn’t know the Tomatometer for Austin Powers was so low. It was the movie that pretty much made Mike Myers a star, got two sequels, and, when it was out, was THE movie I would hear about everywhere. But perhaps that’s because I was in middle school at the time, and its sort of humor was perfect for middle schoolers. Then again, I would often hear adults chat about the Austin Powers movies when taking public transportation. Unless this was the three Tomatometers combined, because I definitely remember a lot of disappointment over Goldmember.