Haha just kidding. We just got one in town and this game is fun as hell. Kudos to the team.

Also so happy to see this. Red and white AS GOD INTENDED 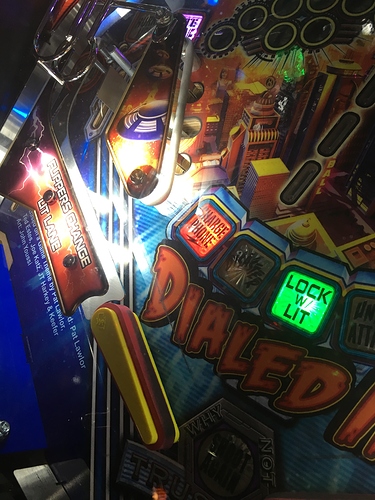 Eagerly awaiting for mine to ship, but I’ve luckily been able to put in some good time in the game. It’s a lot of fun, but I have found it’s usually set up with a pretty mild tilt. Can’t wait to speed mine up by raising the back up a bit more and see how it plays.

Ah, man. I remember the days of the *. I think some designers still have mild forms of PTSD from that.

Dialed In! Seven days on location, the numbers:
830 plays

Incredible. Where was this, if you don’t mind me asking? I’m putting one out on Monday, and I’ll give the same report.

Flip Flip Ding Ding, unless @travam has more than one around.

I really need to head down there this weekend.

Yes it is at Flip Flip Ding Ding in Seattle. As for the 200 flips per game, the game is set up factory recomended playfield pitch and outlane settings. It plays fairly long as most the shots are safe. The right flips are much higher due to the two right flippers and two of the results of plunging the ball go directly to a right flipper. Another aspect is that the game tends to encourage a lot more on the fly shooting and a lot less control during multiball with the magnets and killing of one of your flippers.

Edit: technically 3 of the results of plunging go directly to a right flipper.