It’s probably scattered out there somewhere on the internet, but I wanted to check with the most knowledgeable people here on Tilt forum. Alice Cooper and Ed Robertson (Barenaked Ladies) are well known pinball aficionados, and Tony Hawk was spotted playing pinball in Las Vegas. What other celebrities are into pinball?

Slash from GnR and Jason Sudeikis.

Ed Robertson is a bit of a pinball fan.

i don’t know if he’s a big fan, but I do remember a few years back Wil Wheaton tweeted “This STTNG Pinball machine won’t let me get past the rank of Ensign. It’s like it knows.”

I’ve collected a bit less than 100 pics on a fb-site (search for swisspinball - sorry no link, I’m writing from my smartphone). slash, michael jackson comes to my mind at first

At Sunshine’s opening party for the new back room (NYE 2016) Olivia Wilde and Jason Sudeikis attended with a group of friends from SNL. They stayed and played pin for quite awhile. I know I saw Jason there at least one other time after that. They had previously purchased Tron (the version with Olivia on the backglass as Quorra) from Modern Pinball.

Andrew W.K. took part in a couple promotional head to head pinball matches at Quarterworld in PDX a year or two ago. I think I read an interview where he talked about liking pinball as well.

I also saw a pic of Elijah Wood in front of the LOTR at Quarterworld. I dunno if that was just for laughs or he’s actually a pinball fan though.

Presumably the same one whose backglass he signed at Ground Kontrol here in Portland.

Jim Jeffries is a pinhead - I wonder if he swears as much as the current PAPA circuit champion when he plays? 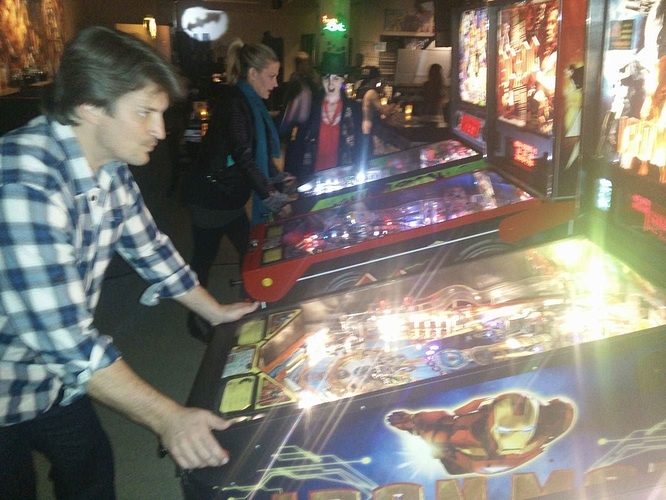 Do voice actors count? Olivia Hack (from Avatar and Hey Arnold!) posted a couple Instagram stories of her playing Road Show at the arcade in Nickelodeon’s new HQ.

Gary Dell’Abate from the Howard Stern show has at least one pinball machine.
http://forum.arcadecontrols.com/index.php?topic=98259.0

Does @PinballNarcissist count as a celebrity?