Someone brought me this Gilligan’s Island for repairs and it has a weird flipper bat I’ve never seen before. It has the lightning bolt design yet is ever so slightly larger than a plain WPC bat and it has a C logo I don’t recognize. I know there’s a lot of people here that have been involved with pinball for some time, maybe one of you will recognise this? 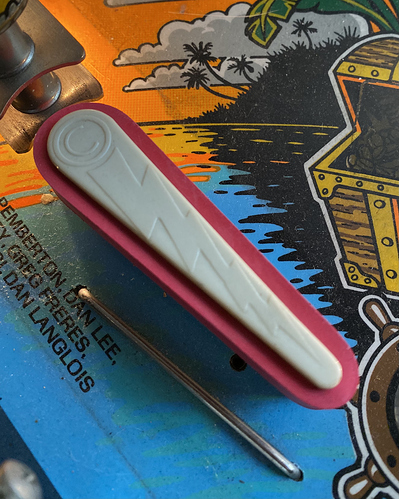 Send it to me I use lightning flippers on the majority of my modern machines. They were used on Williams machines like Dracula, Fish Tales as they are a little smaller in length and create a bigger gap in the middle to drain.

Dude I had these on my Italian import LOTR! Could never figure out what the heck it was. It is actually standard length.

I know what a normal lightning flipper is, this isn’t one, hence the question. Also not mine to send.

I think this game is likely a reimport as the coin door is super jacked up, so something European feels accurate, but this bat is definitely a touch bigger. Here’s a repro WPC bat on top for reference, you can’t really tell from this but the butt end is also ever so slightly expanded. 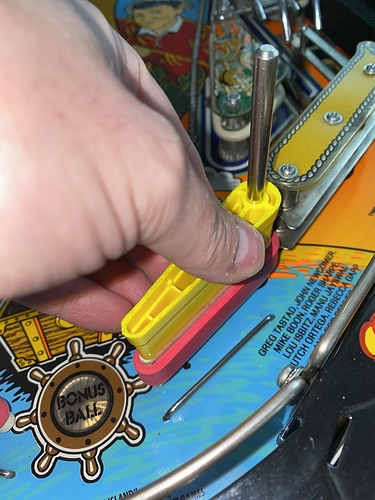 Oh I guess what I meant is - it’s NOT lightning sized. Never measured to see if it was longer than standard flippers or not, I replaced them anyway because they freaked me out ha

I have seen ones with an x on them too and Gottlieb made a lightning flipper too but one with a c is different for sure.

Yeah the “X” ones are made by pinball center in the EU iirc. and they are a good analog in size for regular lightnings.

The “C” one is interesting - I’ve seen those before but I believe I’ve only seen them in Europe. And you are correct, they are longer than regular flippers and I believe intended to be a replacement for the longer “carrot” flippers on some sys 11 games. No idea who made them.

Years ago when lightning bats got popular a lot of different people were making them. No doubt some were made without WMS ok. Seems like more than one supplier were making inferior bats that didn’t last long before breaking. Should be messages on RGP about it.

I’ve never seen that particular bat, but I have come across the crappy repros including ones that weren’t the correct size (standard size). If I found those in a game, I would replace them. False advertising. Lightning bats are supposed to be smaller, not bigger.

You can probably get more information about this flipper from the vendor:
https://www.ecflipp.fr/en/index.php?controller=contact

Seems like more than one supplier were making inferior bats that didn’t last long before breaking. Should be messages on RGP about it.

Yeah any of the modern repro lightning flippers that BAA, Marco or PBL has sold are all junk imo. They all shatter - went through quite a few before I trashed em all. The originals are great still, and I haven’t had any problems with the repro X ones

What are “repro X” bats?

Interesting… I still have one set of NOS lightning bats I picked up at CAX years ago but I’ll have to keep an eye out for these X bats. I used a new set of red ones on a Drac that’s out on location and they’ve held up ok with quite a bit of regular play—prior to the 'rona shut down anyway.

I haven’t used these particular ones at Pinball Centre. I purchased all of ours have at Marco and never had any issues with them. I have them on a lot of machines at the arcade and have held up well at past YEGPIN’s as well.

I have some Williams logo white lightning bats I bought a while back from someone on Pinside. If they have the W logo, does that mean they are OEM, or could they still be repros?

Repros do have the W on top. The originals that I have (and from what I’ve seen) have a thinner circle with a crisper and thinner W inside. I’m guessing the repros were made from a mold of the original and the mold making process caused some expansion of the artwork on top. But this is just based on the repros I’ve purchased as compared to originals I’ve had on games (and the ones I picked up at CAX way back). I’m not sure it’s possible to say with 100% certainty one way or the other though.

Cleaned up some junk boxes and found one of these C type bats. Dunno how clear it is to see, but they are a tad longer that the regular W marked one.

Also realised that the W mark on the two bats that have them are not facing the same way.

The bats are aligned by the shaft. 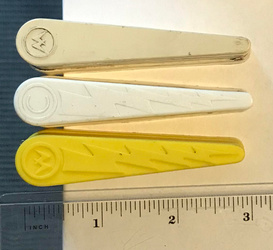 Great analysis and photo showing the measurement. So from this, it looks like: