Appeal to unlock an important discussion

This is an appeal to Greg, and whomever else might be in charge, to unlock the “Let’s get the ball rolling” discussion started by Moscaturf. Lets Get The Ball Rolling

I will not venture into a discussion here whether or not playing competitive pinball now is a good or a bad thing. It seemed to me, that the above thread had as its objective to do just that.

What I am going to argue is that shutting down speech is not a good idea in general, and it’s particularly bad when it comes to an issue that affects us all.

I understand that the moderators need to curb a discussion that goes off the rails, and/or has run its course. I believe they have done this in an exemplary way in the past. The difference here is that it was shut down after the initial statement. There was to my knowledge no insulting words written, or anything else that would have deemed this an unsuitable post. Rather, in my opinion, it was long overdue that we had this discussion in the open, and also in my opinion, there is no better forum for this than here.

If memory serves me right, the word Forum means a place for open discussion and exchange of ideas. By censoring us for merely discussing an important topic, that also happens to be quite divisive, I think you are doing us all a disservice. Where else can we have this discussion? TiltForum has become the place for pinball discussions, and I am very grateful to Greg for having created it. People from all over the world read what is said here, and we could all learn so much from each other, if we were only allowed to have this discussion. Eventually pinball will be back, and nobody wants to wait any longer than absolutely necessary.

To say that “the science is pretty clear that we have not done nearly enough to flatten the curve and that opening up the economy is going to lead to a second spike in deaths” is saying that all other arguments are wrong and as such should not even be heard. I respectfully disagree with this. If there is anything that science teaches us, it is, that stifling speech is harmful if you are after the truth. If one is uncomfortable with certain views, one can always choose to mute the thread.

I would have said this if the tables had been turned too. I just want us to be able to express ourselves in a respectful way, no matter what our beliefs are. People should be free to make up their own minds, with the best data possible presented to them.

I hope that the people in charge will take another look at this, and decide to open it up again. If not, I believe it would set a disappointing precedent.

Thank you again for creating and maintaining this great place.

pfff no locking that thread was a great move.

While I’m not going to be planning any pinball activities personally for a while still, I know that others in my area are working on plans to offer competitive play in new and creative ways with safety in mind. A discussion of how to protect players while offering the opportunity to compete would be a helpful thread to share as they do their planning - right now it’s just a few brains trying to think through all the possibilities and more ideas and insight would help them. I guess I’m saying some people are going to create events during this time before sanctioning returns and creating a thread that is a resource for best practices for them could be helpful.

I will add that of course a respectful thread is what would be helpful. One with ideas around sanitizing, mask requirements, single player versus multiplayer needs. Real caution needs to be displayed as these events begin to occur and so ideas to implement that caution would be helpful. I’m nervous about all of this, but can’t control it - they will be happening.

I’ll pose another reason or two why we need “some” discussion of this. While I also do not feel it’s yet time to reopen pinball events, there clearly will be no complete consensus as to when that point is reached. (I specify pinball event reopening because discussions of the shutdowns on a broader basis are outside the purview of this forum and I want to keep the politics out.) Furthermore, even if there was “one agreed upon set of criteria,” it will not be reached simultaneously everywhere. This leaves us with a set of issues to be addressed:

On a related note, how many of you have, or know someone who has, come back from a pinball event, especially an out of town one, and come down with some kind of bug within a week? 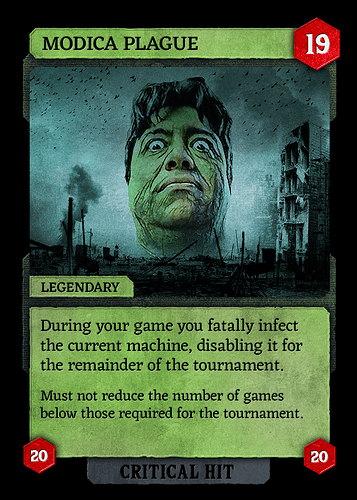 There does need to be a frank discussion on how to safely (as is possible) run pinball events in the future but I don’t see how it doesn’t devolve into a liberal vs. conservative mess. This thread has already set that tone from the beginning.

There are a lot more important things to worry about than restarting tournament play. That original post sounded very trollish and was just asking for an argument to start. That’s why I assume it was squashed immediately. I know we are all hoping tournaments will start soon but we haven’t even done a good enough job shutting things down and we are paying the price. Let’s stay safe and healthy.

I think most all of us agree that there are more important things than pinball tournaments. That’s not the issue that I am raising. Like I said before, I will not argue the merits of when it is a good idea or not to start again. What I was trying to convey, before the thread went in a different direction, was that we should be allowed to discuss it here. I don’t see how censorship helps, but if I am wrong, feel free to convince me of that instead of shutting down the conversation. And for what it’s worth, I didn’t find the original post trollish at all, but as a starting point for a discussion. We don’t have to all agree, but we should be able to agree that more substantive debate is better than less.

I liked Tracy’s post about this being a resource for us all. That was my intention too.

I have three points to make here.

Where else can you have this discussion? Basically everywhere but here which is exactly why I created this place. I did not want a no-judgment free speech zone, I wanted one which explicitly and outwardly centered a certain point of view and offered a safe space to a segment of players which didn’t have it. I honestly never expected it to grow to the point that it has. but my view on that hasn’t changed simply due to this forum’s growing place in pindom. Feel free to take these discussions to Reddit, Facebook, Pinside, Twitter, or any of the other myriad platforms that will welcome them.

This thread is locked.