Tron with a Cliffy on the scoop. Player had plunged the ball which found itself resting in the lane leading to the scoop but was stuck on the edge of the Cliffy. The player wanted me to put the ball into the scoop since that is where it was headed before it got stuck (he wanted his skill shot). I wanted to agree in principle but knew that there was no such provision in the rules for that sort of allowance. I told the player that I could only put it back in the shooter lane but that he could try to knock it into the scoop on his own and fortunately he was able to accomplish that.

Should there be a provision that in a situation where if there is a 0% chance of any other path of the ball that we be allowed to place the ball accordingly? Another hypothetical example would be if say the ball became stuck in the Crystal Ball lane leading down into the up kicker on WoZ.

For the sake of the argument, let’s assume that the ball could not be nudged free without tilting the game.

Is there ever a “0% chance of any other path” in pinball? How many times have we seen crazy backspin or ball hop or whatever make a “guaranteed” shot fail? (And in the specific case of the Tron scoop, I’ve seen skill shots just fly right over the scoop hole without dropping in.)

Personally I would not feel comfortable with manually hitting any scoring switch or shot for a player, regardless of the apparent likelihood of that shot being made if it weren’t for [insert freakish pinball situation here].

(Along the same lines, I think the infamous T2 Super Jackpot ruling at PAPA a few years back was just the wrong ruling. If the machine didn’t acknowledge the shot, the shot wasn’t made. Fortunately @pinwizj properly earned more than enough points the normal way that it didn’t matter…)

For me it is simple. Ball goes on flipper on the side of the playfield it got stuck on, unless it got stuck exiting the shooter lane, in which case it goes back in the shooter lane. No discussion. No choice (by me or the player). I like clear, unambiguous interpretation.

The only time I do something different is if interlock isn’t disabled, then things change.

Yes but we’re not talking about a moving ball. This is a stuck ball, not unlike the oft-mentioned scenario of a ball suspended above a lit kickback.

Ruling it anything other than a stuck ball that goes to the flipper or shooter lane opens up a whole slippery slope of interpreting where the ball would have gone…and I don’t think we want to go down that path.

That same player wouldn’t want to hear that you decided to drain a ball stuck on the Prison magnet in TWD because it was perched perfectly between the flippers.

In pinball, a made shot is one that triggers the switch of said shot. Nothing else counts. This isn’t horseshoes, or hand-grenades.

For me it is simple. Ball goes on flipper on the side of the playfield it got stuck on, unless it got stuck exiting the shooter lane, in which case it goes back in the shooter lane. No discussion. No choice (by me or the player). I like clear, unambiguous interpretation.

This is the ruling that would happen at Pinburgh; the PAPA/IFPA rules allow TD discretion about where the ball goes (Pinburgh TDs do not use that discretion).

I don’t think this ball should have gone back in the shooter lane, since it is already in play, but that is a TD decision.

In pinball, a made shot is one that triggers the switch of said shot. Nothing else counts.

Unless it is a lit kickback.

Unless it is a lit kickback.

Good point. I guess we do have exceptions for things that happen in/above an outlane.

As Joe also mentioned, often times that shot falls right over the scoop, seemingly more often on games with a protector than without.

I would have placed the ball on the right flipper. Provided no switches were hit the player could drain and try again.

Good point. I guess we do have exceptions for things that happen in/above an outlane.

Well, PAPA and IFPA do. No one else has to have such exceptions if they don’t want to.

This sounds exactly like the problem the first run of Tron scoop protectors had. It was bad enough that Cliffy redesigned them. If this is the problem, remove the Cliffy and get the newer style or you will likely keep having the problem. 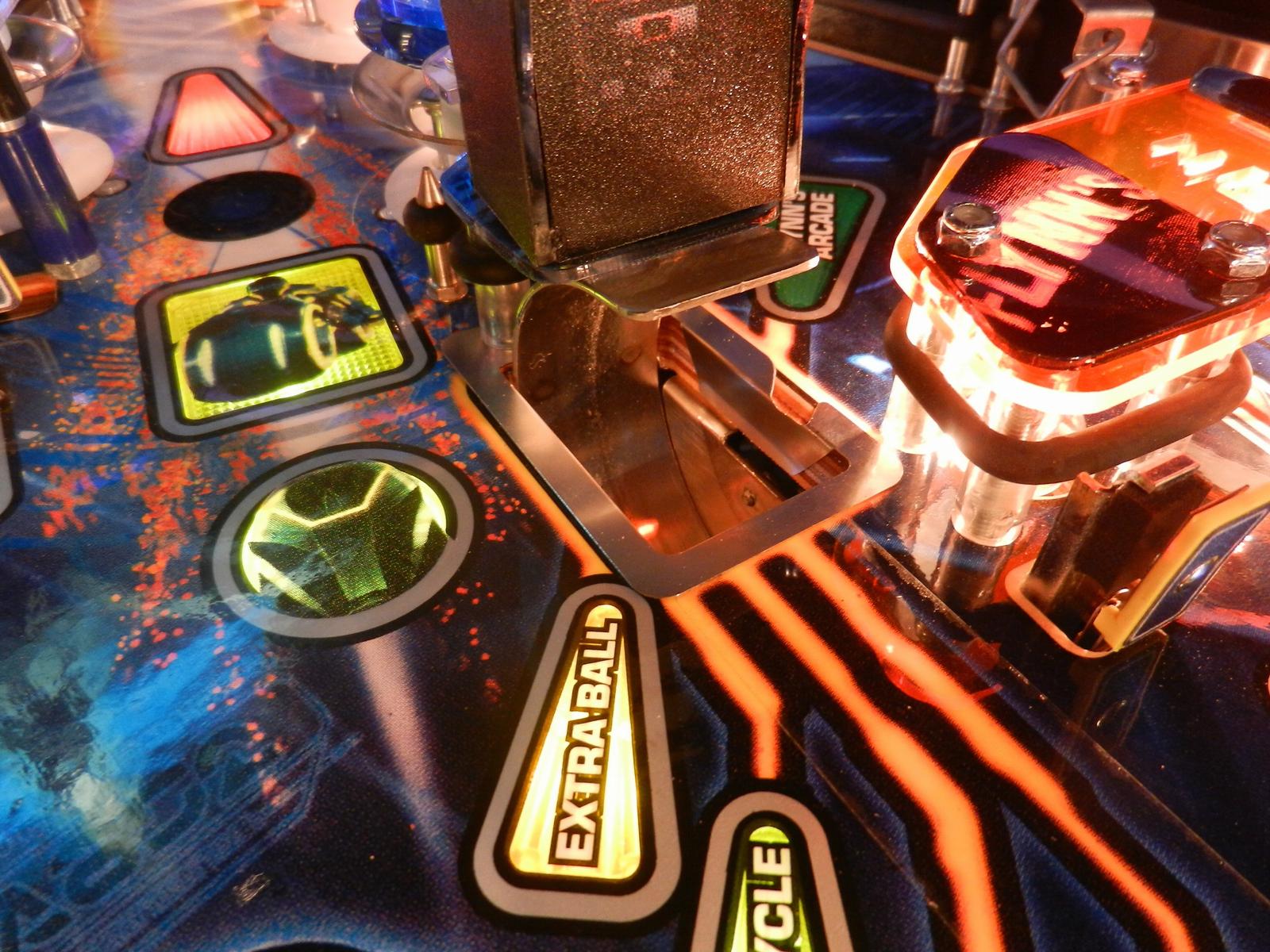