Hi folks, I know i’m not a frequent contributor here, but I hope you all can tolerate a little crass self-promotion.

I just released a thing I’ve been working for the last 4 months. It’s a game room high score tracking app called iScored. Basically, it’s a highly-customizable fancy digital glorified whiteboard for you and and your guests (or patrons) to record their scores. It works on Windows, Mac, Linux, Android, iOS, and various tablets (anything with a modern web browser, really). It was primarily designed with a touchscreen in mind, but it also works fine with a keyboard and mouse.

Here’s a video of it in action on a large touchscreen:

Here’s a video of it on a small Amazon Fire 7" tablet:

Users are responsible for uploading their own images, but it comes with a whole bunch of customization options and dozens of fonts built in. My beta testers have done some really cool stuff. Here’s a few screenshots:

Some of the options: 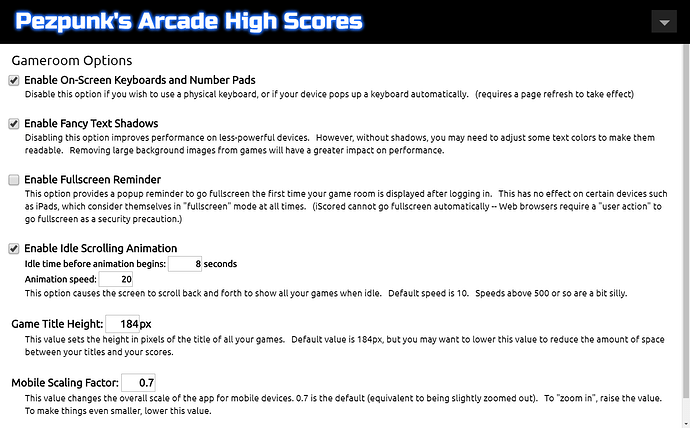 Works for video games too: 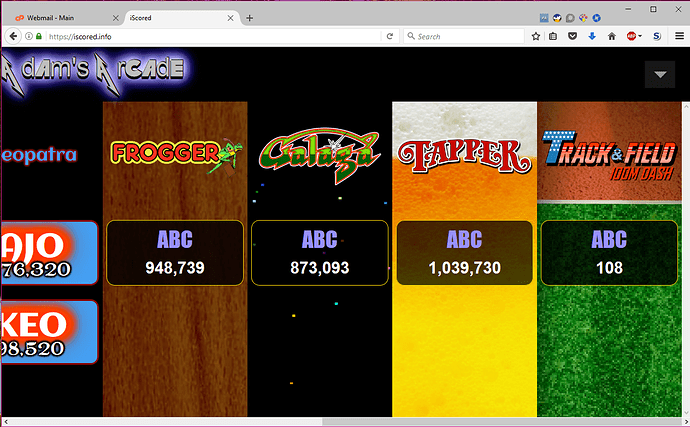 I wish I owned all these: 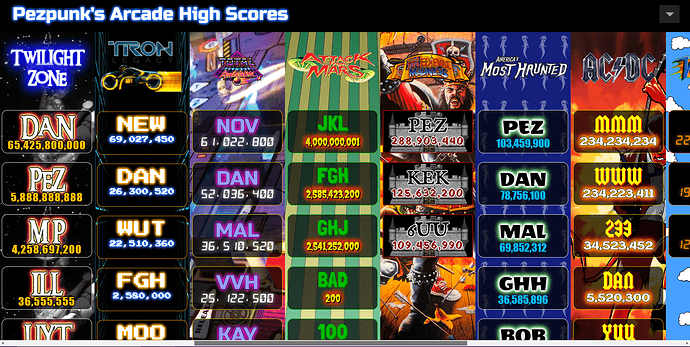 Lifetime access is $19.95. No subscription fees, no ads, no limits on the number of games or scores you can save.

Hope you enjoy it!

Does this track more than the top 4/5 scores? Can you scroll (up/down) beyond what is shown?

yes, each column scrolls vertically with either a mouse wheel or a swipe gesture.

you can see vertical scrolling in this clip:

there’s no limit to the number of scores you can store per game.

actually that’s not accurate. there are 39 usable characters, and three character positions, so in theory you can save 39^3 or 59,319 scores per game. If you’d like to test that theory be my guest.

Hi folks! I hope you don’t mind me topping this thread for a major feature update.

I’ve added the ability for users to save and share their custom game styles with the rest of the iScored community. I think this will be a very fun and useful feature, and I can’t wait to see what cool designs people come up with! There are already several crazy designs with animated backgrounds (yep, gifs work … hard to convey with a screenshot, though). 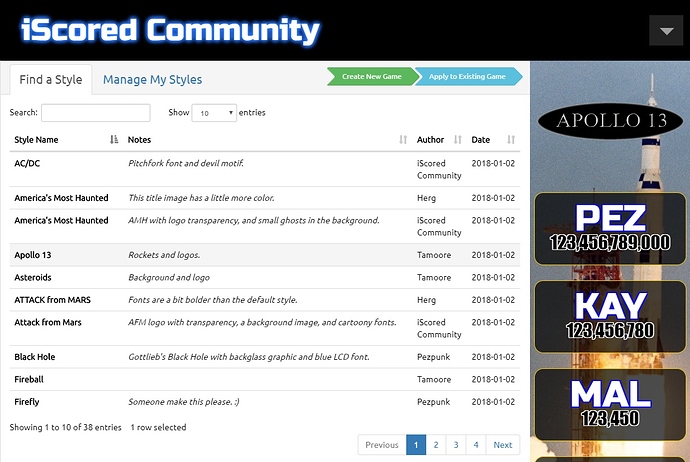 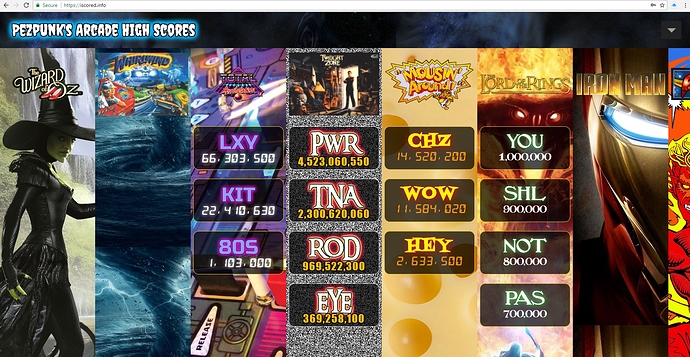 Running this on a big screen at The Sanctum with a laptop below for everyone to publicly track the high scores on all 47 of our games. People are starting to rally get into it.

That’s awesome! Sometimes it takes a little encouragement, because it’s not something people are used to doing, but in my experience, once they start, they get hooked on keeping track of their bests and comparing them to their friends.

I finally got around to set it up on our location at Work-Work; a bar in Trondheim, Norway. Fingers crossed that the general public will behave.

It’s running on a 27" Hanns.g/Hannspree touch monitor and a Raspberry Pi 3+. The scrolling and UI in general is a bit choppy, honestly, so I might decide to upgrade to an Intel Compute Stick or something later on.

That looks amazing! Don’t be afraid to encourage people to use, to get it to catch on!

Yeah, all the barkeepers will be instructed to go play some pinball and record their scores to get properly acquainted with the system. That way they all know what it is and how it works, so they can help and inform the guests.

We have now upgraded to an Intel Compute Stick, and everything is buttery smooth. The Raspberry Pi just wasn’t fast enough.

Is it possible – perhaps with some CSS magic – to get the game picture to stay put on top when scrolling the scores vertically, instead of disappearing out of the screen?

Cool! I agree, the rPi3 scrolls a little bit chunky for my tastes on a graphic-intensive gameroom.

As for fixed column headers … hmm, I am not sure if it’s possible or not without an upgrade to explicitly add that feature. I can look into it, but probably won’t get to it today.

Since this was topped anyway, I’ll mention that I put together a high score board for my local league location (Carpool in Fairfax, VA) and i think it came out looking pretty cool, check it out:

(this link is the read-only version, so you can’t enter scores)

Can this be updated by any user from their own device or must it be updated from the computer where it is currently running?

anyone with the password can update it, from any device. (phone, pc, tablet, the touchscreen on your Tesla, whatever). Since posting scores to a web app is fundamentally an “honor system” premise, it’s up to the owner whether to set up a touchscreen where visitors can enter their own scores – probably perfectly fine for a home gameroom, probably a risky proposition for a public locale, where’d you’d probably want a set of trusted people who can update scores.

probably a risky proposition for a public locale

We decided to have it open for anyone in our public bar arcade, and it works fine so far. We did choose to limit names to 3 characters to avoid funny business on that front. We’ve had a few (very few) instances where 10-character high-score entries were used to write personal attacks, so we tend to stick with just three now.