What are the advantages that can be given to players in the finals for a tournament? I think the main ones are:

Obviously there’s no right answer to what type of advantage to give the top seeds, but I think most people would agree that there should be some advantage. My opinion is that the more “significant” that qualifying is, the more advantage should be given to the top seeds.

I think that the format of the top qualifier ‘driving the bus’ i.e. choosing the game to play (or choice of position) in EVERY knockout round is way too overpowered.

I think at best it should be top qualifier chooses game/position in first knockout round, then next round the player who finished top the previous round gets choice.

The largest comp I run I pre-determine the route to the final for all players beforehand (based on qualifying) - meaning that even if each of the 3 rounds go to a the tie-break in a best of 3, no player will play the same game twice.

You should be able to play on all games, not necessarily those which you’ve got the best rules knowledge or learnt a particular feed from a machine during earlier rounds/qualifying.

how big is that if they you are in an event that says if we are running long then Game Choice will be cut down?

I think bus driver, papa scoring finals, is WAY too much of an advantage.

Some combo of your three are my go tos. I’ve gotten away from allowing order choice. It’s predetermined as the most likely order based on my experience. Haven’t had any complaints yet, but have only done it for a year or so.

We’ve sometimes done Strike finals where the people on the bottom have “starter strikes”; basically enough to simulate as if you played a round or two with Swiss Pairing. And then you play the event out like a Strikes event.

We did the “driving the bus” method for our league finals and that seemed fair because of the difficulty of winning a whole series, but I agree that in a single tournament that is too much power.

Cincy pinball finals give the better qualifier of the 2 player match first choice of game (they must go first), subsequent choice is given to the loser of last game with them also going first. This means better qualifier will always pick two of the three games if it goes to three, which is significant IMHO.

doesn’t INDISC let you swap a game in/out of the bank?

I’m sure there was at least one previous thread on this exact topic. As for Indisc, we let the top seed in Main replace one game. We do not allow repeat game selection across rounds.

One other top seed choice not mentioned above is choice of one a set of TD-preselected banks of 3 or 4 games. I find I like that better than having the top seed choose each individual game for a round. This can also have a “no repeat choice of banks” rule. It can also have machines in more than one bank if the games must be played in a fixed order, e.g. Metallica could be game 1 in one bank and game 3 in another.

To give an example in the opposite direction of what most others are discussing: in FSPA league play, our finals format is generally 3 or 4 player groups, with each group playing two all-plays, plus head-to-heads across all combinations of players.

We give the higher seed choice of game AND order in every game, except for one of the all-plays, where we swap the 1 and 2 seeds.

Powerful? Heck yeah. TOO powerful? Perhaps. But the thinking is that players have had FORTY games during the regular season to earn their seed. We want every players to play every game to the fullest, even in the last week or two when some people may have clinched a spot in the playoffs and are only playing for seed (and WPPR points). It’s not uncommon for seeding positions to differ by only a couple league points, so this rule tends to keep players fighting hard to the bitter end of the regular season.

Despite that power, it’s amazing how often The Curse Of The Game Pick kicks in.

Is there any data available for bus driver formats where the highest seed in the final group wins the tournament showing that it’s far more than 25% of the time (assuming finals is a group of 4)?

Yes. It’s too powerful. You have a bank of 15-20 games and you can pick the same three every round. Whether they choke or not with that power, doesn’t matter to me.

Let’s say no matter what advantages you give the top seed, they are all equal in terms of data and results, it would be more entertaining to a viewer to see a variety of games and just the slightest chance for more parity. At least in my opinion it would.

Providing a better viewing experience for streaming is a solid reason that has nothing to do with this power being “too powerful”.

It’s also a solid reason to say “I don’t like it.”

I was only asking if this advantage is actually a material advantage? That answer can be “no”, and it’s still perfectly fine to make the rules you make for the reasons above.

FWIW, this is the breakdown of the route to the finals I use - from a 9 game bank - when 24 qualify, and the top 8 get a bye through the first round. All matches seeded based on qualifying positions. 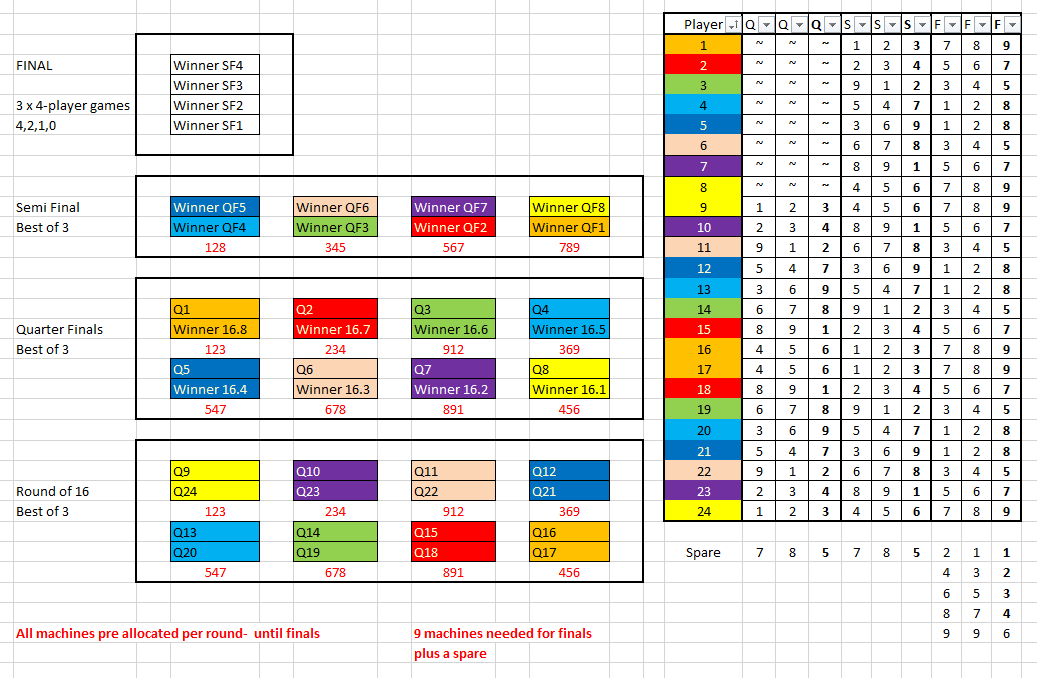 There’s always at least 1 machine not in use per round - meaning you could switch to that in the case of a major malfunction.

I then randomly draw the machines for the finals from the bank.

I don’t think there’s an overpowered advantage, though there’s certainly different ways to scale said advantage, but it’s an earned advantage. Clepin’s finals format made me care about qualifying as high as possible with the ability to pick game each match. Free Play Florida nerfed bus drivers as this past year only had the higher seed pick game or position the first game, then reverse order finish determined who picked game 2/3. That pretty much made it to where I didn’t care at all about the tie-breakers for seeding in Classics or Main.

Playing in both versions with both qualifying formats being unlimited herb, I much prefer the higher seed to just drive the bus the entire time instead of creating a situation that the wheel just keeps switching hands and anyone can take everyone off a cliff. Which admittedly I got to experience on Cosmos (thanks Tom Graf) at FPF, but then got to do the in the finals of main with Rancho.

A happy medium imo is game choice via bank with reverse order finish order choice for subsequent games. For variety sake, can only pick a bank once.

I usually do Winner drives, but cannot pick same games in Semi and Finals. I enjoy that element of thinking ahead of do I need to pick my best games now or later? I don’t think it’s too overpowered and glad the stats back it up. With so many good player variables as well (some excel on modern, some excel on classic etc) I think it’s safe to use.

Yeah having the player choose different games each round definitely makes things way more interesting for all involved.

To give an example in the opposite direction of what most others are discussing: in FSPA league play, our finals format …

Ah, one point I forgot to mention in my description above: each finalist must pick a different machine for each game pick they have during a playoff round.

Another version of game-choice we used in our last local monthly for each finals group:

We wanted to make it a little less powerful to be the highest seed. It seemed to work pretty well.

Byes are the biggest advantage I can think of. Expo being the most extreme example, with each eight position jump being one more round bye. I guess in that case maybe it’s more of a way to allow bottom qualifiers to climb the ladder.