Adding tilt warnings to a ball

After watching some of the NYC event streaming this weekend, which was some awesome first rate streaming, I wondered if the modern game software should or could be changed to add tilt warnings to a ball.

Forgive me if this can already be done and Adam just doesn’t know about it.

I mean, we can add ball 4 to deal with ball issues, why not allow tilt warnings to be added to deal with warning-thrus?

I assume we’d still yellow card warning-thruers, but I’d like to be able to have TD’s give people back their warnings in those situations.

Even the ball adding thing is sortof a hack. It’d be really cool to have a separate menu where you could give an individual player another ball, add tilt warnings, etc

Heighway supported at least some of the functionality you’re talking about. I’ve thought about supporting some of this stuff but haven’t gotten to it yet. Part of the problem is my tournament player hat says “man this would be cool to have” and my manager hat says “there is so little payback to be gained considering the amount of effort it would take.”

I implemented that on Alien, so yes it’s doable. I also added a way to take off an extra ball (in case you forgot to turn them off) and to undo a player (in case start was pressed too many times).

But how often does tilt-through happen on modern games? Which game did this happen on at NYC?

Was the affected player given the option to play a fresh ball added to the game?

I don’t believe typical current tournament rules allow for this. I believe it’s “too bad” for affected player and a warning for the offending player.

In general I personally would prefer warning-throughs dealt with slightly more harshly. One ball penalty? 1/3 score if done? 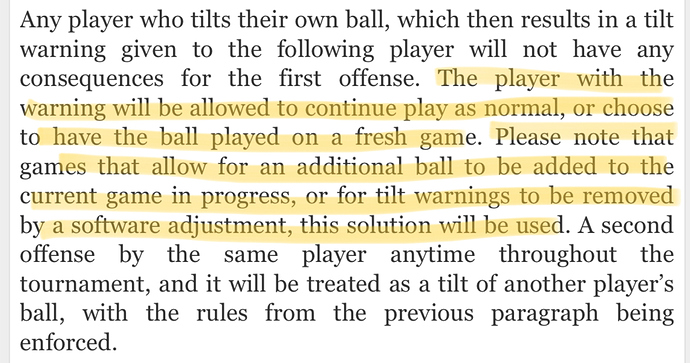 The player was given the option, but in the end decided not to force the hassle of adding an extra ball. IIRC, they were already mathematically eliminated at that point, so probably just opted to be generous.

Never mathematically eliminated from finishing higher in the standings to get some more WPPRS.

I didn’t see it. Was that because a player drained with no bonus and on TWD in that case there is no end of ball display and it immediately kicks out the ball to the next player?

I’ve been coding a game a bit for fun and have been trying to design the software in a way where it can take snapshots of game state at major moments, so a TD could actually rewind the game to before an issue occurred. Probably overkill but it seems cool

It would be cool. It seems pretty hard to implement IMO - you might need an awfully large number of checkpoints, depending on what is “major”.

It was a move to save a center drain, and I think saved but tilted it. The two dangers given to the next player were weirdly 10 seconds or so after serving the next players ball to the shooter lane. Finicky tilt bob.

They were so late I would be inclined to call that a machine malfunction and forego the yellow card.

Did anyone else catch the Spider-Man game during the women’s finals? One of the finalists got a ball stuck behind the visor and no one knew what to do. She played on without trapping up or calling a TD. May need to post a note on Spider-Man when used in events, I think it’s one of the few moderns that can’t detect a ball is back there and people don’t know that’s a stuck ball situation.

Yeah, there’s a specific section of the IFPA rules where it singles out Spider-Man as being different from AFM and Jackbot in that situation.

The language of that rule contradicts itself. I choose to follow only the first half of that rule and not the 2nd half where spider man is called out

Curious what @pinwizj can contribute as to why the rule was written that way. I don’t know exactly what SM does when you knock the trapped ball into the Sandman saucer so I’d be interested to know why it’s treated differently.

“In multiball, some games offer the opportunity to stick a ball in an area that can only be freed if the player uses another ball to free it. Examples include getting a ball stuck behind a visor on games including Attack From Mars, Jackbot and Spider-Man. The ruling in this situation is based on whether the game has software written into it to specifically address the mode or situation”

In all those games the targets and vuks will score on a switch closure. In my opinion thats significant enough to satisfy the software to address the situation part of the rule