I can’t call myself a pinball player, although I played a tiny bit years ago, and have recently become very intrigued by pinball. I’m a college professor–a philosopher of science–and I want to use a pinball machine as an analogy for something that I’m describing in a book I’m writing. As a result, I’ve got some perhaps odd questions for knowledgeable pinball folks here. I’m hoping someone can help me. (Let me know if you think I should really split this into different posts.)

First, have you ever heard of someone setting up an automatic, self-playing game? The idea would be to add mechanisms to a machine so that it would automatically release balls and decide to release flippers at certain moments, etc. No fun to play–since it’s not played by anyone–but might be fun to watch. Maybe some company set this sort of thing up as a demo display at some point?

Second question: There are lots of great, colorful photos of machines on the web. I would be interested in black and white diagrams that display a machine from the outside–e.g. looking down on the playfield. If I could get appropriate permissions, this kind of image would be useful to include in my book. I figure there are some people who read my book who just have no clear idea of what a pinball machine is, and I need to include a picture of one. However it’s expensive to include a single color photo in a book, and black and white photos of complex things like pinball machines can be difficult to interpret unless they’re printed in an expensive way.

Lastly, is there any particularly, humongously large and complex machine that you know of? Maybe a simultaneous (not alternating) multi-player pinball machine?

First, have you ever heard of someone setting up an automatic, self-playing game? The idea would be to add mechanisms to a machine so that it would automatically release balls and decide to release flippers at certain moments, etc. No fun to play–since it’s not played by anyone–but might be fun to watch. Maybe some company set this sort of thing up as a demo display at some point?

I believe Multimorphic has done some work on trying to get their P3 pinball platform to self-play, because it has the breakthrough technology of being able to detect where the ball is on the playfield at any given time. 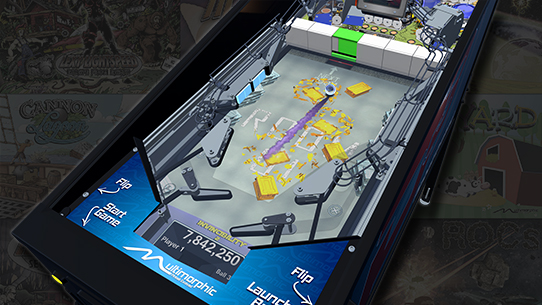 I think cameras are the key to self-playing games. I’ve seen a robot play ping pong and it’s really cool (ball-string-cup is a mindblower as well). You could get a machine to ramp out pretty easy. Might have to unplug it after a while. Getting the thing to nudge or learn all the different types of rebounds from different surfaces would be another thing. A well-lit playfield, high contrast rubber, mark up the ball with some bright spots, high framerate video at hd or beyond, have it tapped into the state of the machine for stuff you might know but can’t quite see. As for rules, do the machine learning bit, you know, leave it alone and say “Make the points” and come back whenever. Sucks it’d have to do all the learning in realtime.
Has anybody tried to robo-hack pachinko?? Or is that truly too messed up to be consistently winnable? (Pachinko business is FASCINATING)

First, have you ever heard of someone setting up an automatic, self-playing game?

There is an experimental self-playing Jonny Mnemonic at the Dutch Pinball Museum in Rotterdam. It uses an overhead camera (plus maybe some additional ones, not sure). I didn’t see it in action but, if you contact Gerard at http://www.dutchpinballmuseum.com, he might be able to help you out.

A Google image search for “pinball playfield diagrams” comes up with a fair few diagrams. One of those might be suitable?

Lastly, is there any particularly, humongously large and complex machine that you know of?

This one is the largest in the world, as far as I know: http://www.ipdb.org/machine.cgi?id=1155 It’s not particularly complex though.

In terms of complexity and number of mechanisms, this one is probably near the top of the list: http://www.ipdb.org/machine.cgi?id=2684

If self playing features are an acceptable substitute to a completely auto-playing game, there are a couple that flip and make shots for the player. Thing Flips in Addams Family and Phantom Flip in Monster Bash come to mind, though there may be others.

Look at the IPDB and find Hercules. Largest pinball machine ever made for arcades. Not very complex by modern standards though. There’s also been some large one off games made for museums.

Come for the pinball, stay for the science! That seems to be the theme at Phæno, a science museum in Wolfsburg, Germany where a massive pinball machine called Galactic Dimension now stands for …

IPDB also shows simultaneous multiplayer games , “head to head” pinballs. And NBA fastbreak allowed two games to be linked for side by side two player pinball.

There was also a prototype game called Total Recall that was supposed to allow side-by-side head-to-head play; it’s a weird looking thing.

Lastly, is there any particularly, humongously large and complex machine that you know of? Maybe a simultaneous (not alternating) multi-player pinball machine?

Wow. Thanks to everyone for these responses. This is just great. I’ll just make a couple of responses, but all of the answers are incredibly helpful. It’s very much appreciated.

@jay, @zacaj, yes, automatic flippers are enough for me, though full fledged intelligent play would be cool. The analogy I’m making requires that a machine play on its own, though not necessarily intelligently. If there are real-world features that can allow that, that’s better than me just making it up. IPDB entries for Addams Family and Monster Bash led me to the glossary definitions for “game-controlled flipper” and “automatic flipper”, which linked to additional games with this feature.

Yes, those are just what I had in mind. (Well, that search phrase seems obvious now. D’oh. In my defense, I only just learned the term “playfield”; I had to look it up to use in order to use it in my question.)

The Monster Bash database entry included a photo of a “black-and-white test playfield”, which might also be useful for me.

Both Monster Bash and Addams Family have patents for the AI behind their functionality, which could be interesting.

I watched this as a kid… The Magnificent Marble Machine

@LOTR_breath, I also write about wheels of fortune. Maybe I have developed a mechanical-games-on-game-shows orientation without realizing it.

For big/complicated, maybe The Pinball Circus? I’ve never played it (since there are only 2 in existence) but it certainly looks large and complicated.

Also, Banzai Run has a completely separate playfield in the backglass which is pretty cool. Don’t know how complicated it is but, seemed worth mentioning at least.

There are a few youtube videos of the self-playing prototype, funwithbonus coverage here:

Also notable - the Alvin G two-player games are self-playing. The flipper mechanisms have switches mounted on the flippers and they flip whenever a ball is on the flipper. Not very sophisticated and no aiming that I’m aware of but it does work.

Monster Bash phantom flips and Addams Family Thing flips are also playfield features that will aim for a specific shot based on auto-adjusting shot timing when the ball is in a known position.

Thanks @jdh, @law, evreryone for those examples. These are very wild. I particularly like the little squirrel (?) that pulls the ball up the backglass in Banzai Run.

I worked on a self playing pinball machine a couple weeks ago as part of a weekend hackathon. The goal was automatic playing with no internal mods to the machine. We used a webcam on a tripod to see the playfield and a couple of servo motors to push the flipper buttons.

Ideally we’d use reinforcement learning to train a neural network on how to flip and keep the ball alive, and eventually learn simple EM games and even more complex modern games down the line. We built the training data collector but weren’t able to get a network trained in time for the weekend, so we whipped up a quick solution using basic computer vision. The version in the video uses a computer vision framework called OpenCV that does some edge detection above the flippers and fires the corresponding servo motor when the ball is nearby.

That’s very cool, @jherm. Just the sort of thing I was interested in. Thanks for the description and the link.

WICKED!! Kinda get those good willies like from watching a self-driving car.

If you want video of an Alvin G machine let me know. Pinballz near me has one on location I could record.