I use a Slap Happy Bucket of Shame at my house during tournaments. Slap the glass, throw a $1 into the bucket (it’s a small metal bucket I hand from ceiling). Thinking of upping it to $5. I need to put it back up, at some point I took it down when games moved around. 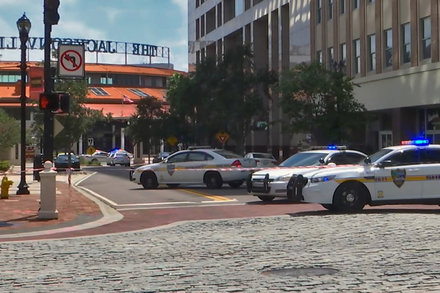 Just before the shots were heard on the live stream, a red laser dot appeared on the chest of one of the players. The police urged residents to stay “many blocks away” from the scene.

Obligatory don’t fucking let our hobby get to this point post. This is what happens when shit gets out of control.

This is what happens when shit gets out of control.

Whoa. That’s awful. Unbelievable that people can go from playing a video game to taking someone else’s life.

I just pray to God that this doesn’t EVER happen to our hobby.

In Portland most of our tournaments take place in bars. The same behavior that will get you a talking to, get you asked to leave, or get you asked to leave and never come back at a bar will also have the same consequences at a pinball tournament. Bars don’t have a long codified list of rules on the wall to indicate when these things will happen. Pinball tournaments don’t need to either as far as code of conduct goes. Most of us know how to behave in public and those that don’t will either figure it out after some consequences, or, sadly, never figure it out and get weeded out.

I work in bars. If you’re running a tournament in a bar and aren’t used to modifying people’s public behavior very likely there is someone on staff who has done it countless times already and would be willing to help you out or at the very least would like a heads up that something may or already has gone sideways with a patron.

And, as has be mentioned already, no one likes to be called out in public for behavior. The more you can pull someone aside–out of view and earshot–to discuss behavior issues the better. Really this simple thing does work wonders.

this is me, as well. i remember feeling pretty uncomfortable the first few pinball events i attended, and some people were reacting with violence (rage tilting, slamming the lockdown bar, etc) and loud profane outbursts. over the years, some of that stuff has rubbed off on me and i’m now actively fighting those tendencies in myself. it’s a terrible habit, and one that makes our hobby less accessible. i have heard LOTS of new people comment on it in a negative way, particularly women, who often express fear and intense disgust at such behavior.

look, it’s pinball. it is a physical game. tilts will and should happen. frustration is inevitable. emotions do, and ideally SHOULD run high – it means we’re invested in what we’re doing. but violence that’s not intended to save a ball, and loud ragey outbursts of profanity are two things that should be weeded out of the scene as much as possible.

Obligatory don’t fucking let our hobby get to this point post. This is what happens when shit gets out of control.

Turns out the kid had prior mental health issues. The competition may have put him over the top, but his hobby didn’t make him a killer.

The suspect in a deadly shooting at a Florida video game tournament had previously been hospitalized for mental illness, according to court records in his home state of Maryland reviewed by The Assoc

The competition may have put him over the top, but his hobby didn’t make him a killer.

Yes, let’s not throw blame on a community that even the fighting game community thinks gets too worked up over games and losses. There are definitely issues all around, but saying that Madden culture had nothing to do with it is naive at best.

We’re not at the point where people are throwing at each other yet, and I don’t want to see the hobby take that turn.

I had a friend who used to be big into Madden a couple years ago. Apparently there are pretty big bucks involved - not so much with the tournament prizes, but with players spending real money buying or trading player cards (the EAsports equivalent of loot boxes) on EA’s marketplace. You have to spend a lot of time and money building up a high-statistics team in order to have any chance of winning. Not sure if that had anything to do with this incident, but it makes me glad pinball hasn’t yet found a way to replicate the loot box nonsense.

I’m curious what people think of this (a leg kick after loss of ball). What do you think the appropriate TD response is, if any (time code 4:26:10)?

Not seeing anything at that time stamp.

It’s just after the double drain. You can see the playfield shake slightly as his leg moves, indicating a light kick. Nothing super aggro,I’m sure I’ve done it a thousand times.

edit: I guess it was enough to go from a double danger to tilt.

Ahh. Okay. Well not sure what the point of it was, but I doubt I would issue a warning for that.

I’m curious what people think of this (a leg kick after loss of ball). What do you think the appropriate TD response is, if any (time code 4:26:10)?

“Dude that was a very mild rage exit for you, good job!”

curious what people think of this (a leg kick after loss of ball). What do you think the appropriate TD response is, if any

Nothing. Didn’t seem abusive, no loud outburst. I would understand if a TD issued a yellow card. Maybe seeing it from an observers position would make it appear more egregious.

I heard about a tournament within the last year where Jorian got ejected for what was described as a minor leg kick. Did anyone see that? If it’s anything like the video posted, I’d consider that to be a pretty extreme penalty.

I agree. Especially if it was done without warning.

I know I said I would leave this thread but I just have to comment on that one right their. Then I’ll leave again

How can we sit here and say the reason for these rules is to make people feel more comfortable and inviting to pinball but we all sit here and say that was not a violation but hitting the lock bar out of frustration is a violation. Both are acts against the machine in an unnecessary reply to frustration. Either you are protecting the perception of the game or you aren’t.

Also, I just finished watching the stream and they were talking about a Yellow Card issued to someone for a vulgar word because their were kids walking around and it was in a Yacht Club. The part I found extremely ironic is they basically talked about how inappropriate it was and yet, just 5 mins earlier the two talking about this were making lude sexual innuendos on stream.

Again, I actually don’t have a lot of issues with what is being discussed here and voiced some stances and concerns to facilitate deeper conversations on the topics. But where my real issue comes into play is how we are being so inconsistent.

Protecting games - I think we all get. Don’t pick up a game and drop it, don’t punch the glass hard in a fashion it could break, don’t push a game into another, etc… These are the obvious ones.
Creating a more open enviroment - This is where things get dicey. I’m pretty sure I could successfully argue that more people in a nice establishment would be more uncomfortable with 2 guys making sexual innuendos about pinball than they would be with a player going, “that’s bull sh!t” and walking off. From a bystander, a light leg kick (which majority said was OK above) is OK but a frustration slap on the lock bar is not. Me personally, I think a leg kick while walking off is worse than a slap on the bar as a ball drains.

Again, just food for thought but it feels as though some hypocrisy is creeping in to this new “standard” of pinball behavior. And that is when things will get very frustrating for players and make the lives of TD’s much harder.

Re: the leg kick, I’ve seen people shake machines harder than that. I wouldn’t do anything if I was TD.