Use of LED Head Lamp

I think those visual aids that are mentioned are not allowed as it would cause unnecessary delays in play. Do your research/learning before you step up, not while playing.

Headlamps have nothing to do with this imo.

I found one issue with headlamps this weekend. A player at OBX (no name will be mentioned) used one. On two occasions, I was distracted by the light from their lamp reflecting in my face off the back glass as their head moved (we were on adjacent machines). I didn’t mention it and played on, but if it becomes common, we may need to look at it. Basically, I’d say a player physical aid (vs info aid) is ok within reason, but it should have no significant impact on other players.

I was just having this discussion with a friend about our local league; I’ve even asked to have the overhead lights on during league night but many of them don’t even have bulbs! So tempted to bring this work light: 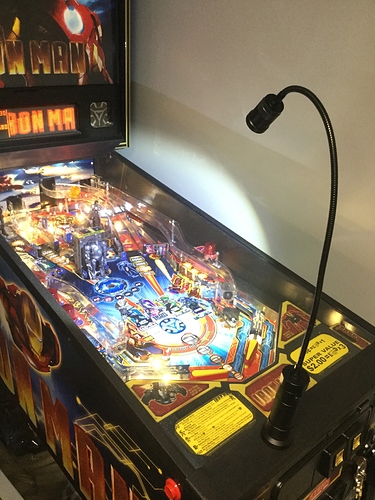 Agree on the new Sterns being the worst offenders!

I’ve played alongside players with headlamps many times, and as long as they’re mindful to turn them off before looking away from their machine, I’ve never had a problem with it.

I dislike the headlamp very much. IMHO they’re distracting and shouldn’t be allowed.

This was discussed previously here basically it seems to be allowed under the rules.

I wonder what @pinwizj official IFPA stands is on it though? It does not seem clear.

It’s not [illegal] . . .unless the headlamps projects the rules of the game onto the playfield.

AKA as the NES rule.

On two occasions, I was distracted by the light from their lamp reflecting in my face off the back glass as their head moved (we were on adjacent machines).

My thoughts exactly. If this was anywhere in my line of vision, I would refuse to play until it’s removed. IMO, another player’s actions should not cause an undue distraction to my game.

IMO, another player’s actions should not cause an undue distraction to my game.

What if a guy is just gross and smells?

The problem is… defining a boundary of what is considered distracting. Unless you are looking at their game, I can’t see it being anymore distracting than people moving around.

Bob’s example of a backglass reflection is an excellent example of how a distraction can happen while you are looking at your own machine.

The simplest solution is to stop play if you feel you are being distracted. How long you do so and for what reasons is up to you and the TD.

Maybe we need signs to hold up whilst a ball is in play, something like this? 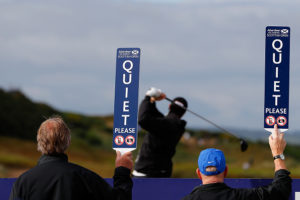 I jest of course, but really… there are so many blinking lights on a pinball machine already, but it’s that one over on a different machine that bothers you?

Guess it depends how dark it is. If it’s dark in the venue, you’re going to notice it more. But if it’s dark in the venue and GI is bad, then maybe there’s something they should do about the game.
At the last tournament I played in, there was a gentleman that used a headlamp. I don’t think it was too bright. I didn’t notice it until I saw him strapping it on for his turns.
Vision can be all kinds of bad. There are plenty of people who probably have pretty dim vision that can still enjoy pinball. I would try to be accommodating and not say anything, because you don’t want to put somebody’s game off by making a thing out of their gear.
HOWEVER, it’s easy to see how somebody being an oaf about it could be very distracting, walking around like they’re in a coal mine. I think if you step up to the game, look at the playfield, and then turn it on, it should be no more distracting than when a tech uses a little flashlight (or headlamp) to work on a nearby game.

Ugh, lemme just get this off my chest… what KILLS ME, are CASUALS. I can have SJG doing tennis ball hail next door and it doesn’t bother me at all. But soon as you get two goobers hanging out talking about their jobs, I’m done. And KIDS. Kids are the ultimate casuals. Serious kid pinball players are fine! But parents with their squirmy kids, forget it. I know pinball needs its next generation and all, but golly I’m just not that cool. I know these are my problems and there’s nothing I can do about them.

I accidentally elbowed a small child in the face once. Maybe 6 or 7 years old, he decided to pop up between my arms to better see the playfield, right as I was making a big move. Dad just shrugged and said “that’ll teach him”

I still have that scar on my forehead you know.

i use one and have been for a few years now. when there are COLORED led lights in the gi or way to bright leds or to dark in the room , i use one to counteract it. some tourneys the rooms and lightning just isnt bright enough. some shows turn the lights way down for some reason for games in free play section. not good for the tourney games. i dont play in dark bars either. don’t blame the players, blame the machines with terrible led’s (esp the color led that make the game dark and dingy) or the shows lighting.

And every time Albert Medallion uses a lamp, its distracting for everyone

If that distracted player doesn’t bring it up to a TD … It doesn’t mean anything to me as that TD.

I did receive an official complaint from someone’s head lamp usage at Nationals last year, and they appropriately received a yellow card. There were no more complaints filed of that player the rest of the tournament.