The Chris Compton. First to wear pajamas to a tournament. I was actually surprised he didn’t have on pajamas at Pinburgh. But he did have two different color shoes!

Was trying to think who was the originator of wearing headphones while playing. It’s commonplace now, but I can’t remember the first time I saw someone do it.

Some other notables that I can think of:

What’s the best combination of those?
I’m thinking the best Set Bonus has to come from headlamp, headphones, gloves and beanie.

How is the towel used in competition?

First flying high kick slap save?
First stopping in the middle of a ball, to drink from a water bottle with one hand?

I wore gloves early on too but didn’t stick with it very long. I’m sure I saw someone else do it, or we talked about it in rgp or something. I got some receiver gloves because fingerless and good grip.

Definitely time for a pinball accessories pro shop with a booth at every tournament. For me pls with rent a bar stool option.

And here a snapshot of pinwiz and IFPA boss Josh thinking sharp how to translate latest developments into new rules and what the global implications will be: https://www.imdb.com/title/tt0073631/mediaviewer/rm829762048

No socks or shoes was Bowen at Pinball Expo 1995. #DancingClownWithStinkyFeet

After pinburgh I definitely realized I need a towel… I need to find a good one themed one! (Do those exist…?!)

Has anyone else worn a cape in the past? By law of pinball history I assume so.

We had someone play as Batman at Cactus Jack’s once. I’ve also seen video evidence of Nacho Libre playing down at BOS in Texas. 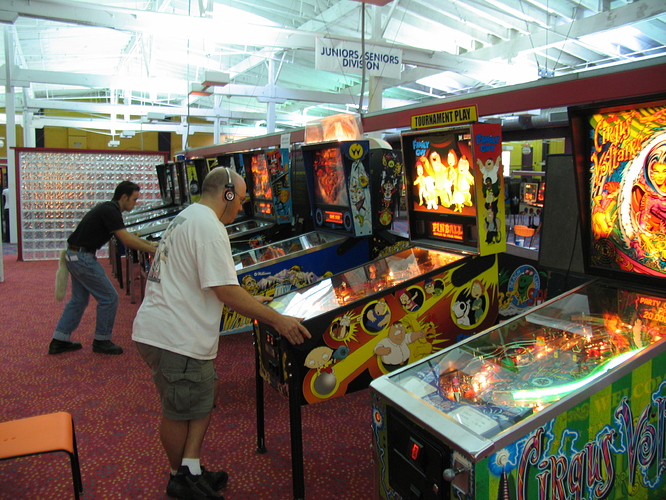 I’m pretty sure Gabriel “tails” Devine was the first (and only!) player to regularly wear a tail when he played ? Unsure if it was purely for aesthetic reasons, or if it offered some tactical benefit (i.e. dogs use their tails for balance when cornering etc.). YMMV, indeed!

Its interesting that towels were such a dominant theme in the 90s, and NOBODY uses them now.

While I readily admit that I am a nobody, a towel is mandatory for me. I use it before I play and also after I play, and I suspect the next player up after me is very thankful for it.

I’m just slow to change on the towel front

I’m a big fan of the idea that you should start every ball the same whether it’s first round or final game last ball. Helps my mental game.

StL calls me the human rain delay, and I can’t say they’re wrong.

I’ve seen at least one other player wear a tail in competitive play. If due to scheduling errors Pinburgh and Anthrocon ever have to share the same weekend at the David L. Lawrence Convention Center, I think we should all wear them as a gesture of friendship and as a sign of solidarity amongst people with unusual hobbies.

I’m not sure pinball is an unusual hobby, but it definitely attracts some unusual characters. I like that.

Gabe once told me why he wears the tail, but I don’t remember, so it wasn’t anything crazy. Seems Ike he wore it once for kicks and did well, then decided to stick with it. He’s a good dude. If you see him at a show and he’s not playing, say hi and introduce yourself. His tail is about the only unusual thing about him.

I think people start to feel it’s unusual when I mentioned flying out to Pittsburgh to play it then driving from there to Buffalo two weeks later to compete again. Just throwing a few quarters in a bar game isn’t unusual.

I associate headphones with Michael Dawn, the Chicago Expo years in the mid 90’s.

Mike dawn is crushing KY and Cincy tournaments now. He got back into the game a year or so ago. Great dude. Didn’t realize he rocked headphones back then.