Ruling: Listening to the tournament stream while competing

Yes, wrestling. Probably one of the reasons I enjoy pinball is the similarities in individual competition it shares with wrestling. I’m also on the fence about coaching in pinball, but I honestly think it would be pretty cool to see in a tournament and see if it makes a difference.

It’d make a huge difference. Providing real time information that my current strategy isn’t optimal and to provide a clear path towards more efficient scoring would no doubt lead to higher scoring or at least provide a more competitive game on a pin that someone’s knowledge of runs deeper.

+1.
Case in point: It could have made a big difference in my INDISC semifinal game of BKSOR, had I been listening to / able to hear the stream commentary. In the heat of the moment, during my multiball, I was executing my strategy but made a massive error in not getting my add-a-ball ready. After watching the stream archive, I noted that the commentators appropriately pointed this out while I was still early in my multiball. In this case, my error wasn’t due to a lack of knowing how to add-a-ball, it’s that I made a sub-optimal execution/tactical decision. Had I heard someone mention this or been allowed to have an in-ear coach, I may have caught my error with enough time left in my MB to correct it.

FWIW: I’m on the fence re: allowing coaching, and I’ve yet to see a satisfactory proposal on how to implement it.

The real question is who becomes the best coach? I think the reality is anyone qualified to be a coach is most likely playing in the tournament.

If restrictions were put in place that said coaching must be done by someone not participating in the event as a player themselves it could lead to some interesting scenarios, but again, I think most people who could give the right advice in those split seconds are already playing.

I’m all for allowing coaching to my headphones as long as Cayle is on my speed dial!

Just get your ‘coaching’ before the tourney starts! 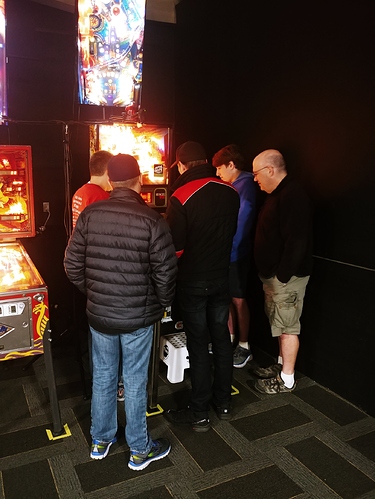 IMHO rules knowledge is a very important part of the game, just as important as flipper skills. Coaching removes this aspect of the game by outsourcing it to somebody else. Decision making under pressure is part of pinball and having a coach makes that easier. Additionally, certain people may have high profile players as friends that happen to be willing to coach them.

Thing is, that happens anyway, as demonstrated in @pinbwzrd’s photo above. Many (most?) competitive players are part of a strong local scene – or even if not “local”, have friends they’ve made over time – and if a player goes deep in a tournament, their buddies will likely be coaching them before every ball, and probably not helping opponents who aren’t part of that “scene”. Although between-ball coaching isn’t as powerful as during-ball coaching, it can sure as heck make a difference, especially for new or little-known games. Even if your posse isn’t on-site, many groups have Slacks / text groups / e-mail groups / etc that can lend a hand remotely.

So you can try to ban coaching, but if you really want that to be effective, better take away the competitors’ phones and put them in an isolation booth for the entire tournament. Good luck with that. (And then you still have the “loudly talking to my friend” coaching during balls that I mentioned before.) Or if a TD is really concerned about coaching being bad, just load the tournament with very well-known games where knowledge, or lack thereof, is unlikely to be a differentiator.

A change in rules to allow coaching will have some consequences that will not benefit pinball competion culture. I foresee that at least. And it is a turn off for me personally.

As soon as coaching is a-go, players will start to expect having priviledged condition for being able to be coached. Including, but maybe not only, for their enrourage to have room to stand behind them and observe, whenever they are up. That there is proper wifi connection for uninterrupted and low latency monitoring of the broadcast. That the broadcast of their game is in full. And not just last player last ball. All sorts of BS.

And by the way, it will not be long before the-buddies will not only assist their friend, but also put pressure on his opponents. Seen this happen already.

The being allowed space around you when playing is a huge issue already. I try to create a culture in my events, where next player up on a game has the priviledge to observe it. Everybody else, stand back. And keep the mouth mellow. Yellow cards have been issued for violating this.

And by the way, it will not be long before the-buddies will not only assist their friend, but also put pressure on his opponents. Seen this happen already.

The being allowed space around you when playing is a huge issue already. I try to create a culture in my events, where next player up on a game has the priviledge to observe it. Everybody else, stand back. And keep the mouth mellow. Yellow cards have been issued for violating this.

If you’re actually willing to enforce this, great. Though I’m curious to learn what penalties you enforce against loud-mouths who are no longer part of the tournament. If I’m in the audience, can I get an active player warned or DQ’ed just by shouting advice at them? If not, will you throw me (the audience member) out for commenting loudly on the game in progress? How loud is too loud?

I say “trying to create a culture”, meaning appealing to people to keep this in mind.

The enforcement, if you will, has been very few and mostly regarding one particular bloke who likes to sit on the back of his opponents observing all of every ball they play.

My events are rather cozy.

Even if your posse isn’t on-site, many groups have Slacks / text groups / e-mail groups / etc that can lend a hand remotely.

THIS! I’ve chatted remotely many times with teammates who are attending tourneys I’m not through messaging to give them some quick tips, define strategy, or help them choose their next game if they’re unfamiliar with certain machines based on the options available and my knowledge of how they play similar games.

This to me is more like Cliffs Notes pinball. They still need to step up and play the heck out of that game. I’m just giving them some broad strokes info to consider.

Not to split hairs, but I think coaching can mean something different to everyone, so in order to really dive into whether or not listening to streams should be allowed or considered coaching, everyone needs to agree on the definition of coaching as it pertains to pinball.

(And then you still have the “loudly talking to my friend” coaching during balls that I mentioned before.)

Yeah - that is where my earlier comment came from. No one really ever enforces the no coaching rule(s) as is. And if they aren’t going to be enforced, then they should be allowed.

That R911 picture would have been so much more fun if you were standing there while each of us played. You could have felt so proud seeing us execute your coaching plays

No one really ever enforces the no coaching rule(s) as is.

I know this isn’t much in the grand scheme of things, but at a local tournament a few months ago I snapped at someone (a friend of a fellow finalist) who was making comments like “you’re doing great, just keep hitting that orbit” and “watch your bumps, don’t tilt!” I basically said “Hey, no coaching.” Didn’t utter a word after that.

This is where I stand also. We don’t allow visual aids during a ball, but you can use them between balls. Same should be for coaching.

I haven’t seen any instances of people abusing the no-coaching rule by shouting things out as a bystander, but as a TD I would feel perfectly comfortable warning someone who did this, with the threat of removal from the venue.

I basically said “Hey, no coaching.” Didn’t utter a word after that.

I think its great you spoke up, but I wouldn’t call that enforcement.

Player should have been yellow carded if using the ifpa rules imo.

I haven’t seen any instances of people abusing the no-coaching rule by shouting things out as a bystander,

Interesting, that’s usually where I see it a lot.

It’s often people in the tournament, but not in the match saying things critical to the match directly to the player while they are actively playing. I’ve heard bystanders say loudly “you’ve got it on bonus” or “ball save!” or comment on how much more X a player needs to win (points, multiballs, modes, shots) more times than I can count.