I personally dislike competition installs in general because they mess with crucial things that people who play the game on location wont know, and id rather just have everyone play the game everyone knows and is used to.

To clarify Raymond’s point, it’s Competition Mode (formerly known as Tournament Mode before TOPS) that turns off randomness (presumably), and Install Competition is exactly as he said.

Player competition mode is for location games. It allows you to play as if the game is in tournament mode, by holding the left flipper before hitting the start button. Equalizes mystery awards, stuff like that. I believe that if player 1 starts a game in this mode, everyone else in that game also plays in player competition mode. You can also play the game normally by hitting the start button without holding the left flipper button.

When a game is set to competition mode, there is no choice. Everyone plays with things equalized.

Thanks to you both!

So then I feel a competition install should remove plundering of EBs and score. It’s good to know these are adjustable in any case!

Thanks but I was referring to the competition install that others have mentioned. This is good to know as well.

If plundering a ball kills tgp then what about speakeasy? Wheel has a subtract one ball. But it’s also an add a ball game. It’s still possible for some one to have a one ball game, although extremely unlikely.

If plundering a ball kills tgp then what about speakeasy? Wheel has a subtract one ball. But it’s also an add a ball game. It’s still possible for some one to have a one ball game, although extremely unlikely.

I’m not sure how to address Speakeasy and add-a-ball games, but I know from previous discussion that Beat the Clock, for example, is a game that does not guarantee X amount of balls to a player (because the player can run out the timer in 1 ball), which impacts TGP. This formula is also meant to prevent playing one-ball or two-ball games in an attempt to run a tournament faster but still earn max points. Less pinball played = fewer TGP.

Beat the Clock, for example, is a game that does not guarantee X amount of balls to a player (because the player can run out the timer in 1 ball), which impacts TGP.

BPSO for example, it reduced TGP to 88%.

I completely agree with the whole one or two ball games to cheat the system type of stuff is lame.

Hate to see games be blacklisted for fun unique features too. Stealing a ball from a player is cool but so harsh in a tournament I agree.

A full game of something like our Dolly Parton takes 1/10 or less of the time it takes to play say Iron Maiden. It’s still valued the same. If people run their tournaments as 1 ball games is hope people stop playing because it just wouldn’t be fun. Same if we played nothing but our Dolly Parton to magimizes rounds/tgp.

Stern used to give us a nice chart to see what each setting did. Would be nice if that came back. Family Guy below. 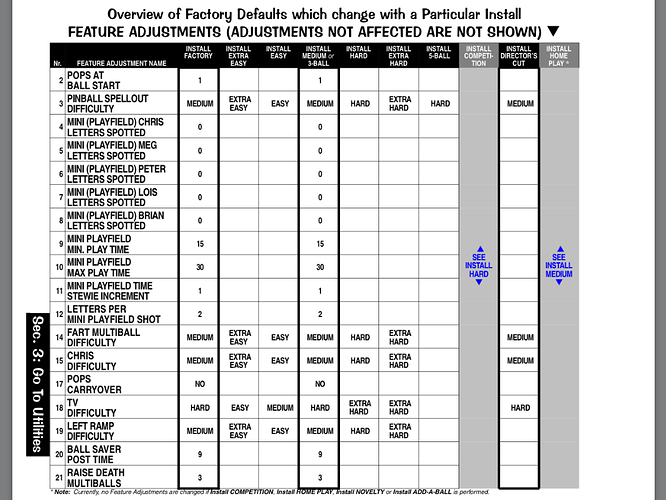 Honestly, it may be fairer played as a one player game anyhow, because all characters are available for selection

The system is completely fair - The International/competetive DotA is fair even though your team might not get say, Anti-Mage for your carry. Drafting/competitive choice imbalance is a completely fair concept and just means you have to:

I think sure, slice the Plunder 5 setting so you can’t plunder balls. But removing one of the more adventurous and competitive features because “it’s not pinball as we know it” is sad for design space in the future.

This is an excellent point I missed last night. So “tilt ends game” ems should all score 1/3 too since you CAN lose more than 1 ball.

DotA is a two-team game, and so is competitive MtG. Giving players options of who to steal turns, features, and points from, in four player competitive games, is troublesome.

This is an excellent point I missed last night. So “tilt ends game” ems should all score 1/3 too since you CAN lose more than 1 ball.

IMO there’s a huge difference between a player induced game penalty such as a Tilt/Slam Tilt, versus the level of cheese factor involved in a player losing a ball due to something that has nothing to do with their own play.

If I reallllllllly need to update the IFPA TGP rules verbiage down the road to clarify that, I guess I will. Anyone that feels there is no difference between those situations is welcome to disagree.

I’m with Bowen in that there’s a difference between looking at pinball as a “game” and looking at it as a “sport”. To me there’s something to a player getting at least 3 balls to play their game in a similar way that a baseball team gets 27 outs to score as many runs as they can. Could baseball be more exciting and interesting if you could do something that would cause the other team to lose outs available during a game? Sure! I just don’t believe it should be part of the sport.

I think the plundering rule is super clever, and it’s not like we’re disallowing it for IFPA sanctioned play altogether. Similar to games like Safecracker, TAF Gold edition, Bugs Bunny, etc, the official IFPA stance is that the game is allowed to be used, but we don’t recommend it. I wouldn’t recommend JJPOTC set up with plundering, but TD’s are welcome to roll with it.

I think the plundering rule is super clever, and it’s not like we’re disallowing it for IFPA sanctioned play altogether.

It’s exactly how I laid it out earlier to Zoe:

The default with no supporting data is that if an event uses JJPOTC and extra balls are allowed to be plundered, then every round played is graded at 1/3rd value.

For TD’s that have supporting data for their round-to-round play (Brackelope/MatchPlay), we’ll look at the rounds played by the winner of the event. Every round that player played JJPOTC would be graded at 1/3rd value, regardless of whether anything was plundered that game or not.

If that clarification is somehow unclear let me know and I can try to make it . . .more clear

If played as 1-player game - that would also be full value?

If played as 1-player game - that would also be full value?