I do agree with the view that a bangback is an abusive maneuver. Anyone who’s done it on a later-era DE game and had the lockdown bar pop out in their hand should agree with this.

Since moving the game to alter the ball’s trajectory is legal almost all of the time combined with the fact we (the community) have had to come up with all this ridiculous verbiage of when it is and isn’t legal now because of the drain point of no return, tilting for benefit (TAF), etc., it’s just another in a long list of arbitrary and silly reasons making tournament rules way more difficult than they should be. Let the game be the referee when possible. 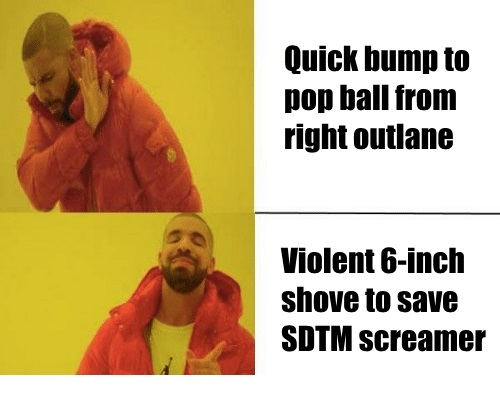 This is definitely a Death Save – the player merely tilted during the Death Save.

The IFPAPA rule (III.7) states: “…these techniques are banned from tournament play.” I always thought that a Death Save resulted in a Zero for that player on that game (and not a yellow card, because the act of sliding a pin isn’t included in the list of Abuse of Machines). But it turns out: the rule doesn’t specify the consequence of performing a “banned” skill.

So given we have a rule that bans Death Saves, what should be the consequence of doing Death Save, whether successful or not: a zero on the game? a yellow card? Both?

It was a death save move, but it wasn’t a real attempt as he didn’t raise the left flipper. It was a reflex move done out of frustration, not a serious attempt.

If I was TD, I would let the player know I saw it, but wouldn’t issue a yellow card. Game hardly moved and it didn’t work, intentional or not. If he had made the save and didn’t tilt, I’d give him a yellow card and a zero for the game.

Mild abuse: No tilt, you get zero. Worse abuse: Tilt, get yellow card. It’s like saying: Don’t rage abuse, but if you do, do it hard.

The shove alone didn’t seem worthy of a yellow card IMO. He didn’t move the game much. I’ve seen much worse forward rage tilts that haven’t gotten a yellow card. Does the fact that his move looked like a death save alone make the shove more yellow card worthy? I hope not.

Reading through this thread makes me wonder if doing death saves is a dying art. I’m surprised I was the only one who noticed he didn’t raise the left flipper. I’d like to see someone attempt death saves with no tilt without raising the left flipper. That was a lucky bounce. Good luck trying to repeat it.

For anyone that watched the Buffalo stream, there was some awesome rule discussion activity that went down! I love when this stuff happens and it ISN’T my tournament!

For those that missed it . . . https://www.twitch.tv/buffalopinball/v/83614821 Go to the 16:15 mark. You’ll see Zen playing Avatar, and after the ball drains down the left outlane he gives it a nice shove forward resulting in the ball in Link moving back to trip the switch, and starting Link Multiball (since he o…

Reminds me of this ol’ chestnut. Why is @zEn always getting himself into hypothetical dilemmas?

Unless you are already in last which is most likely, not always, when someone would knowingly do it. I know I’m going to blow some peoples minds (with my stance on yellow cards in general) but I feel it should be a zero and a yellow card.

I save balls all the time on right outlane without raising the flipper. This is not a good measure of a death save.

he didn’t raise the left flipper… Good luck trying to repeat it.

I think it has to do with right-only.

I will dare to do the physics. After the bounce, the table accelerates straight left, rather than left-down, because no up-nudge. And it recoils more, because no initial left or down nudge. Those two together, the ball misses the left flipper.

I save balls all the time on right outlane without raising the flipper.

I’d love to see video of that. I know the plastic aprons have changed things some, but I haven’t seen anyone do death saves without raising the left flipper. Good to hear someone here is doing death saves regularly. d;^)

I’m not good at death saves, so I don’t do them much. I take some pride in getting GC scores on location without doing them. Still plenty of folks, young and old, doing death saves regularly around here.

DeadPool right outlane with a fast moving ball often saves itself without a nudge or a raised flipper.

Just curious, does anyone know of any location operators putting a piece of deadening material on the apron at the sweet spot for death saves? Seems like it would be a simple way to eliminate the option.

If you look at JJPOTC, there is a very very small piece of metal screwed along with the wireform along the right drain. The astute viewer will notice we were getting a ton of death saves (accidental or not) from the geometry on that game during our streams, so we made an extreme last-minute decision to do something about it and Eric came up with the very elegant thing that’s on there now. Interferes with the ball just enough to mess up it happening.

Think we called the part death save baffle or something like that.

It’s clearly a death save attempt, so yeah, if a TD saw it, sure, some discipline could have been warranted if the TD made the call. Even though he walked away. It was over anyway, didn’t matter or affect the results, and was clearly a frustration move, which is probably why the player did it.

But here’s the thang Skip…and this continues to come up time and again as people watch these streams.

What about all of the other groups that aren’t being filmed or scrutinized by the booth or the home audience? Hardly seems fair that a player in a different group could make the same frustration move and escape any kind of discipline, while the one on camera does.

If people want replay or streaming judgement calls to become a thing, that’s gotta become part of the rules. ANd, to do it fairly, all games really need to be monitored at all times by a judge with the authority to call it, not just a bunch of guys doing their job to entertain and delight the home audience.

I don’t think I’ve ever seen John Madden call down to the field refs and let them know someone jumped offsides when it wasn’t called, and had a flag thrown as a result. Seems like the same thing here.

Yeah I’ve tried to death save on a Dialed In, and it ain’t happening.

I pretty much agree with you regarding spectators and commentators 100%. And I don’t think anyone here is retroactively calling for alteration of results or anything.

We’re definitely not at the level where any of this matters with life-changing money or anything. If we were, you can be damn sure there’d be refs watching every game being played individually.

An interesting recent phenomenon, though, is that I guess golf viewers have called in to alert tournament officials about transgressions caught on video, and the TDs have in fact assessed penalties that they’ve been alerted to. Not sure how I feel about that, but ti’s interesting. I’m not an avid golfer or golf watcher in any way, just an interesting side note.

Don’t really think it’s fair in golf either. I would hope they at least have some written rules in place as far as how they deal with that. But then I don’t really care as I’m not an avid golfer or watcher, or golf commentator for that matter!

Disappointing to see so many saying a yellow card was called for. IMO, it was a frustration shove, not an attempt at a save or a rage tilt. If you are going to give that a yellow card, then any show of emotion at all should get a yellow card.

If you back up 24 seconds in that video, you’ll see that he got a tilt warning for a big move. The tilt was set as it should have been, it allowed one big move. If he hadn’t gotten that first warning, his shove at the end likely wouldn’t have tilted. He was already walking away, so nothing would’ve changed. No tilt, ball drains.

If you back up about 2 minutes, you’ll hear the announcers say that the game has lightning flipper bats, which can be frustrating on a game that shouldn’t have them. The shorter lighting bats likely contributed to this happening too.

Was this the event where several of the games had lightning bats that normally wouldn’t? I think I watched some of this.

Since we’re talking about death saves. What about the WOZ left outlane drain that bounces off the pop bumper/slingshot in the outlane and rockets and hits the center post and back in play, is that a death save? Also does it matter if I hold the flipper up while it’s bouncing around over there to make it easier for it to happen?