The amazing part is how fast he got there. He goes from 150m to 1.4b very quickly and then from there to 3.3 is like the blink of an eye (with a ton of precise shots and only one lucky bounce that found an inlane). Epic finish!

Logged on to my computer this morning and thought I would check out the stream not expecting it to be live still. Out of the whole event I only caught about 15 minutes of live action which happened to be the last game and boy oh boy was it the best 15 minutes of pinball in the history of pinball!!!

Was the repair discussed? What did they actually repair? Was it the diverter for mist? I remember having that issue on my Dracula when I first got it.

Pinball machine game logic relies to various extend on assumptions of what is physically possible. And necessary choices of compromise. And this is not a critic of the designers.

Think of a ramp diverter. It might need to have a time limit in order not to stress it self or the system. That implies an assumption of the speed of the ball from the ramp entry to the diverter.

Sometimes edge cases of real-life playing causes incorrect behaviour of games. And certainly faulty switch inputs can cause this too. Fast chain of events, unusual sequence of events, unusual stacking of stuff, unusual ball movement (as simple as the good old halfway up the ramp).

Ealier in the IFPA finals broadcast, there was a thing on Diner with two shots to the mystery hole in fast succession. Only one registered.

EM game logic are known for having a slow respons time. And this is accepted.

The important thing is to have a simple rule set for dealing with this. Play on, compensation, toss the game, never use that game.

BS Drac is notorious for acting up when the Mist ball is in play. What we saw yesterday might be rooted in software only. And not caused by any mechnical or electrical faults at all. Simply an egde case, where the three drained balls was incorrectly qualifying end-of-ball. And where afterwards, ball diversion to the Mist pocket failed.

They futzed around with it and did a test, and then put it back together. There was no repair.

The game is prone to these kinds of issues because if there’s any error at all it can cause early drains and resulting confusion. I’m not sure if there are a pair of optos in pinball that are further away from each other than the Mist receiver and transmitter on BSD, but that’s part of it.

There’s one more ball to keep track of in the game than there are trough switches so that’s part of it too. You never know what you are gonna get on any given BSD.

The game is prone to these kinds of issues because if there’s any error at all it can cause early drains and resulting confusion. I’m not sure if there are a pair of optos in pinball that are further away from each other than the Mist receiver and transmitter on BSD, but that’s part of it.

Does it use the Mist opto across the playfield to detect when the mist is loaded? I assumed there were secondary switches in the staging location. If it is using that opto, then I could imagine how really unfortunate timing and physical nature of the game could easily get it confused.

It’s been a while since I owned one but yes, there are optos on each side of the mist ball path (completely across the playfield), and I’m pretty sure thats the only thing that lets the game know what’s going on up there. Could be mistaken though.

The Mist mech is supported by the cross beam opto and a secondary opto in the left ball position (and magnet transport home switches). No individual sense of ball in the right ball position.

Going to end-of-ball too early is not triggered by a false indication of ball in Mist mech alone. That bug is rooted in something else.

Going to end-of-ball too early is not triggered by a false indication of ball in Mist mech alone. That bug is rooted in something else.

Thanks for the info. I was just running through scenarios in my head like, tough eject failure/bounceback timed exactly with ball it play crossing opto making the game think the load succeeded and trough is full.

The ball looks to be in the mist path about the time of the error. And watching it again, no ball was ever served to the shooter lane. 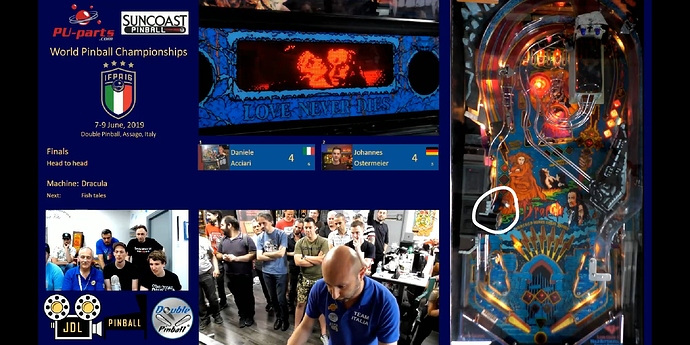 Only other option which @gammagoat hit on was continuing the existing game and give everyone a comp ball / Ball 1 on a 2nd game. I think most TDs would of made that decision but based on the specific situation it made sense to stop the game and try to reproduce the error.

Not from personal experience but I have always heard that BSD is buggy. Going all the way back to some earlier PAPA videos they were discussing all the bugs. Similar to T2, so why use it in a high level tourney? Also I find it interesting that Daniele just kind of accepted it since he just blew it up, But Johannes came all the way back to win. Just shows that no lead is ever safe.

There is a tournament version of the rom that addresses the random mystery awards and the tilt warning bonus bug. PAPA has used it in the past. Unfortunately, even this version of the rom has the same issues with occasionally getting confused with the number/location of balls.

Terminator 2 software contains bugs that can potentially be devastating to a competitive game. Known bugs include: 255 drop target hits to multiball, and a multiball bug that may occur when a ball is locked with zero seconds left on the timer causing a string of odd behavior from the game.

If there were known bugs for Drac, it would be listed there.

Did Daniele try to refuse his major malfunction? If so, why was that not granted?

If not … I encourage folks to read the rules about having two major malfunctions in the same game. They are very specific and they were followed.

Mine never had that issue. I replaced all the Mist optos. Drac may be more susceptible to hardware errors (disguised as software errors), but my experience has shown me that the software is fine.

As old as the game is and as often as it’s been used at Papa, wouldn’t they have DQ’ed the game by now and added notes to the website? Forget my opinion. Josh and Papa both endorse Drac for high level competition. Forget the bad reputation too. The game is just more susceptible to errors caused by hardware. Replace the Mist optos and trough switches and the game is rock solid. It’s also extremely fun.

From personal experience, I’m pretty certain it’s buggy. I owned a mint-condition BSD from 1999 til a couple years ago, and it would play fine 99% of the time, but seemed that every couple hundred games it would lose track of the balls and go stupid. Never, ever found a switch problem and the game never threw an error. Perhaps this is similar to Nine Ball, where the software is fine “in theory” but falls apart on the slightest mis-input… maybe something such as a ball kicking past one of the four trough switches without triggering it or such…

If not … I encourage folks to read the rules about having two major malfunctions in the same game. They are very specific and they were followed.

I agree that the process was followed under the assumption that the major malfunction was something fixable. This is not consistent with my experience of how the rule is enforced across any event. At pinburgh, if this was to happen in the qualifying rounds, I am pretty sure we would be sent to the backup bank. I have never experienced waiting in that situation. In pump and dump, I have experienced waiting for them to repair the machine. So I think the rules are being enforced more situationally than written.

At Pinburgh, this would have sent the game to the backup bank, unless a player called for their malfunction to be refused.

@gammagoat cheers, you nailed it.

I have been poking around on this one today. At first I rejected blocking the Mist sense beam as the reason, because it showed not to be a problem. That is, when blocking it before draining balls. However, it can trip the logic on a specific seqence of events.

The hazard is as follows.

During Mist MB, either solo or stacked, when draining down to one ball-in-play. And after all balls in the trough have settled on their trough switch, and before the feed a ball to the Mist pocket procedure has started, there is a small window where blocking the Mist beam will trip the game to go to end-of-ball.

From my investigation, the “switch closure” of the beam do not have to be of any substantial duration. So shooting a ball pass it might do the trick. But it will have to be done with the right timing within the sequence of events.

Having balls in the Castle lock trough does not change how this works.

There is an additional hazard on the game regarding the Trough 4 switch. Which can kill the current ball-in-play at any time. But only when closed for a couple of seconds. If bad switch, dent trough or bug-in-the-matrix, yes. Otherwise I lean towards the Mist beam theory.

As old as the game is and as often as it’s been used at Papa, wouldn’t they have DQ’ed the game by now and added notes to the website? Forget my opinion. Josh and Papa both endorse Drac for high level competition. Forget the bad reputation too. The game is just more susceptible to errors caused by hardware. Replace the Mist optos and trough switches and the game is rock solid. It’s also extremely fun.

wasn’t PAPA latest attempts at BSD, with the updated tourney ROM, pulled out at the end of the qualifiers last time it showed up there?

it goes town to TD preference since it is not critical issues. Same with T2 in my opinion, seen in many tournament without issue but since @pinwizj suffered the bug once it is unlikely to make any IFPA