Joke went over my head. To be clear I’m talking about #1 seed chooses their first opponent then 2 seed, on down. After the bracket is made, play it out as usual.

Joke went over my head. To be clear I’m talking about #1 seed chooses their first opponent then 2 seed, on down. After the bracket is made, play it out as usual.

Oh I got it . . . Illinois is just a blood bath regardless of where the seeds end up

I’ve been lobbying for our league to switch to this method for years.

Either those links are bad or the data is wrong. No way, in the uncapped version, for last year Colin was not #1 seed. That first link shows him as number 6 seed. It almost looks like it’s this years standings without a cap. If so, I think this proves the problem even more drastically as now Robert, Phil and Colin have dropped to 4th, 5th and 6th. All 3 of them have 1/3 the events than the 1st through 3rd place seeds have.

I was posting THIS YEAR vs. THIS YEAR (capped vs. uncapped).

Let me see if I can dig up last year vs. last year.

From my perspective its a catch-22 as participants who are comfortably qualified for the SCS have no motivation to continue to participate in events from a competitive perspective. By them not participating the events are worth less which makes it even harder for folks not qualified to become qualified. From a player perspective it makes me want to earn all my points the first 9 months of the year. From a location standpoint they’ll have less participants the last 1/4th of the year.

Colin is 1st over Fred who would have been 5th.

I’m not sure I understand the capping vs uncapping. if you’re capped and are comfortably qualified and don’t participate in some events later in the year they’ll be worth less. You’re comparing events with the existing participants.

Maybe capped vs uncapped for the first 9 months of the year.

Whether it materially changes who qualifies and who doesn’t isn’t important to me - capping at 20 is consistent with world ranking and that just makes sense.

If we have a player who starts competing today and is even able to hit the 20 event mark the events will be worth less. They’ll be worth less because higher ranked state players are less likely to be competing in them.

Just a quick review shows some pretty significant changes. Just looking at the bubble people for last year that just missed out of top 16, all 3 of them would have made it in the capped version.

So from a competitive standpoint you have to choose which you prefer to represent a state. It’s hard making some of these comments as I truly do respect each and everyone of the players on those list but do you want volume or consistency? I think the cap is a happy medium as it allows some volume but also brings in the consistency point. I also think 20 events is a good stopping point but if it appeases others bump it to 25.

What data supports this theory? We still have people with 60+ events this year which are basically the same people as last year when their was not a cap. They are playing because they enjoy playing pinball and I don’t see their participation dropping off because they are comfortably in.

I’m jealous of them for being able to play in that many events.

If they played you would get less points due to your lower finishing spot. So you lose both ways so play better.

If someone starts playing today, I would recommend that they put a little more effort into making state. Even if they could win twenty events in three months and be left out because the valuable players are at home resting, I would still point to them needing to put forth more work rather than the system bring unfair.

You have to perform well and consistently to make state. You have to perform against your competitors or you won’t make it by brute force. That is the goal of the rule change. Saying someone who starts playing halfway through October won’t have an opportunity to grind their way into state is exactly what we’re hoping for.

Since the discussion morphed into a capped vs uncapped SCS system I updated my MI SCS spreadsheet by charting out the differences of various scenarios. Pretty interesting results. Updated 10/14 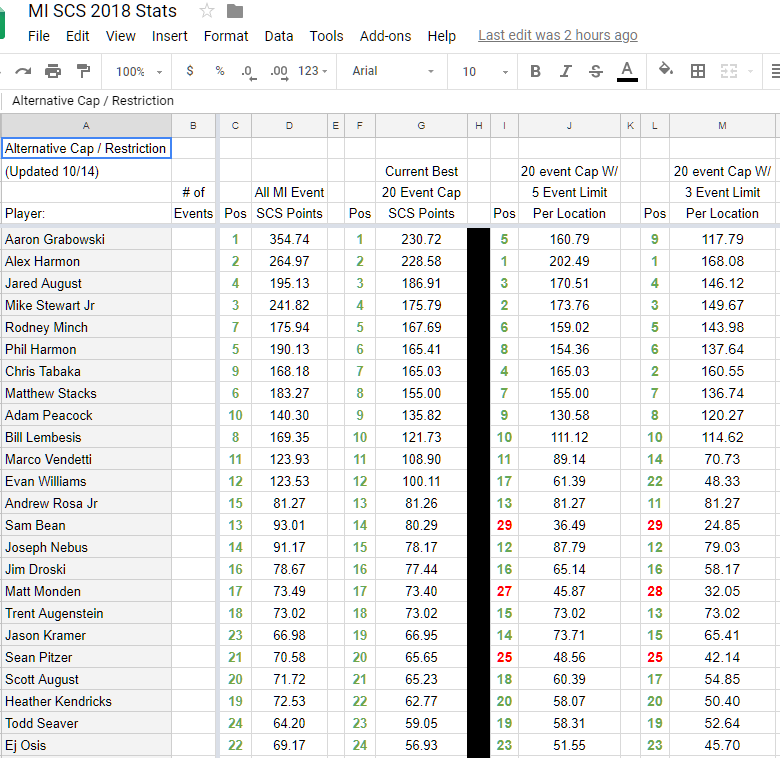 As I mentioned above, capping vs uncapping comparisons of last year doesn’t take into account the tapering off of some of those players which will occur this year (now) with the 20 event cap. We’ve already seen in this thread how players aren’t going to compete because they’ve already hit the 20 event cap and are comfortable at their current SCS qualifying position. When we can compare Oct/Nov/Dec 2017 vs Oct/Nov/Dec 2018 we’ll see the impact this rule has made.

I agree that the last quarter is where we will see the most changes if there are any. It will be interesting to see how it plays out in different areas. I suspect that the more active your region is, the less tapering off there will be. Could be way wrong. I think we’re also giving ourselves too much credit here, competitors and those who follow the rankings/get familiar with the rules are in the minority. 80% of our league has no idea about any of this so if there is a drop in attendance it’s more likely an attribute of personal decision making/the holidays rather than discouragement from being no longer able to make state. Has there traditionally been a decrease in attendance during this quarter?

From my perspective its a catch-22 as participants who are comfortably qualified for the SCS have no motivation to continue to participate in events from a competitive perspective.

I am comfortably qualified for the SCS but will continue to play for 2 reasons.

If it were completely consistent with world ranking, though, it would include more than just the current calendar year. I just see it as a different contest, so I have no problem with it having different qualifying rules.

As I mentioned above, capping vs uncapping comparisons of last year doesn’t take into account the tapering off of some of those players which will occur this year (now) with the 20 event cap. We’ve already seen in this thread how players aren’t going to compete because they’ve already hit the 20 event cap and are comfortable at their current SCS qualifying position. When we can compare Oct/Nov/Dec 2017 vs Oct/Nov/Dec 2018 we’ll see the impact this rule has made.

And that is just dumb to me. Unless those players have taken first in all 20 of their events that count they can still improve their score and rankings. And if they took 1st in all events then still playing is an advantage because it prevents others from taking first and getting those points.

Their is zero advantage to not playing once you are in. Looking at NC, this rule is actually perfect for your state. You only have 3 people with any significant amount of wins and then it’s littered with people with only 1-4 wins all year and averaging only 1-3 points per event. Ya’ll have a ton of players with more than 20 events as well so your state is very much susceptible to the “pay to get in” method vs skillfully making it in. This isn’t an everyone gets a trophy type of thing. It’s supposed to be a tool to find the absolute best players in a state whom could go on to find the absolute best players in the country. Your state proves right there pretty easily that those with the most time or deepest pockets would get in without a cap. Their appears to be plenty of events for people to attend to limiting their number to their best 20 finishes helps to find the most skilled.

I’m actually surprised your arguing against this after looking at your state rankings. And looking at the numbers of your state it makes even LESS sense for anyone except the person in 3rd place to even consider stopping play. Everyone 5th or lower on that list can increase their rankings a lot with just a couple of wins and their is only a 10 point spread between 16th place and 33rd so your state is very much still in the game for whom gets in. The more I look at your state number the less I see any logic for stopping play. 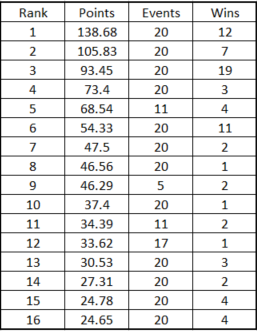 There’s usually an uptick in attendance near the end of the year. November is predicted to be one of the biggest months in IFPA history. (btw, i haven’t updated these predictions in 4 months or so) 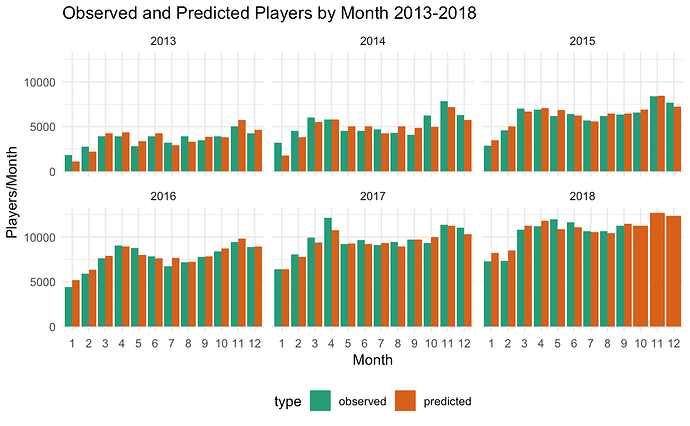