Who will win the Champlain Cup? Team Montreal or Team Vermont?

I am excited to announce a friendly new series of team competition between league players from Montreal and Vermont. This home and home series was inspired by a recent match played players from Buffalo and Toronto.

The first session in the series will take place at the Pinball Co-op (South Burlington, VT) on Saturday, May 13. The Champlain Cup will be awarded to the team with the most points after the second session at North Star Machines à Piastres the following week.

Information about the format can be found at http://www.pinballcoop.com/champlain-cup-about.html 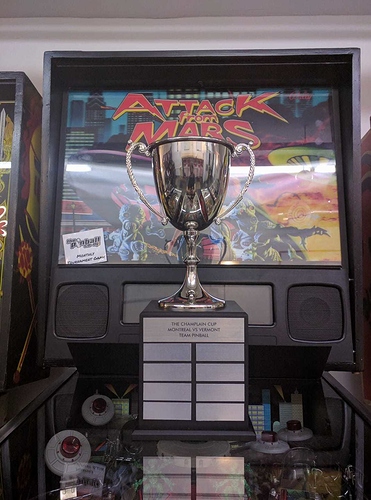 I look forward to posting the results and any tweaks we make to the format going forward.

Until then, go Team Vermont!

Team Vermont is out to a nice lead, with 35 points to Team Montreal’s 15 points.

From the outset, it was clear that Team Montreal came to play yesterday. They were just a few bad breaks and some deeper game familiarity away from being able to stay even with Team Vermont. Potential betting parties should expect a similar result in reverse for Session 2 at Montreal’s North Star bar next Saturday.