When Do Pinburgh Results Get Posted? 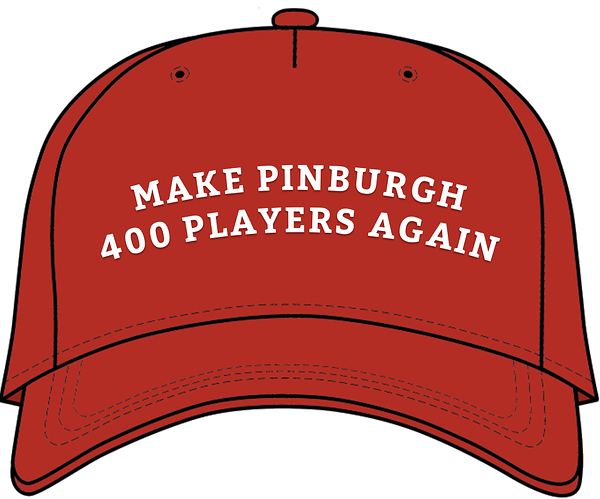 Next, tiebreakers. If two people tie for second, IFPA says they tied for third.

If two people tie for second, IFPA says they tied for second

Our logic - both players tied for 2nd and 3rd. Avg finishing position for both players is 2.5 … We round in favor of the player so both are listed as 2nd.

If THREE people tie for second, IFPA says they tied for third.
Our logic - the three players tied for 2nd, 3rd and 4th places. Average finishing position is 3rd place so all players are listed as 3rd.

The logic makes sense but the process of manually submitting that is annoying, and I’ve just done it for much smaller events.

It would be nice if the user could just leave them as ties and the system sorted them appropriately.

It would be nice if the user could just leave them as ties and the system sorted them appropriately.

Allows us to help Andreas and push people to MatchPlay as their software of choice. They handle this no problem!

Yeah that’s true. Most of the times I’ve struggled with it were in the pre-MatchPlay days. That’s definitely a nice feature.

I guess if you want to play in a 400-player US tournament that’s not in Pittsburgh, you’ll just have to attend INDISC.

I’d love to! January just isn’t a good travel month for me.

Most of the times I’ve struggled with it were in the pre-MatchPlay days.

At one in time in the pre-pre-pre-MatchPlay days I submitted the results of every tournament myself manually.

It also led to a ton of people making up numbers, which led to us fixing a lot of numbers later.

This part has to be pretty rage inducing. Maybe before next year’s onsale day a page could be set up that is specifically just a “put in name, get number” search with no other overhead to be able to better handle the load. Either at IFPA’s page, or matchplay, or even stand alone. Just update a single table with names and numbers the night before, then link to it on the ticket purchase page.

Is Lyman going to be included in these results? It appears he played 50% of the event and that is the minimum for submission per my understanding. If not, what is the rule so I can submit my tournaments appropriately

It’s 50% (or more) of qualifying. So, if you only played Day 1 of Pinburgh, that would be enough.

I look at the requirement as 50% of the games played before a portion of the field is eliminated. He played 20 of the 40 games before anyone was eliminated from the tournament, therefore he should be in the standings.

Or maybe verify the numbers in the 6+ months prior to the event using email?

intergalatic is still a stinker in that scenario tho… but I agree in principle… make it a registration problem, not a results problem

intergalatic is still a stinker in that scenario tho… but I agree in principle… make it a registration problem, not a results problem

587 people patiently waiting. Do they typically wait until day 59 for Intergalactic results also?

Just a friendly reminder that “they” are people just like you and me and that (for many reasons) is complicated and time consuming to verify and submit IFPA results for tournaments with 600 and 1000 players.

We just have to stay calm until the 60th day. October 3rd is coming up.