During the broadcast of City Champ, a viewer commented via the chat room something to the effect that CC seemed like an easy circuit tournament to win. My first thought was, no way dude, but it got me thinking. How could one measure the difficulty in winning a tournament on the PAPA circuit? So I set out to find some stats on the PAPA & IFPA sites. I chose to look for top 100 players, top 25 players, and also the number of participants. This is of course only one way of doing it, (and yes, you could also use the IFPA Tour value for each tournament) but it could be a start & it gave me something to do with a free afternoon! 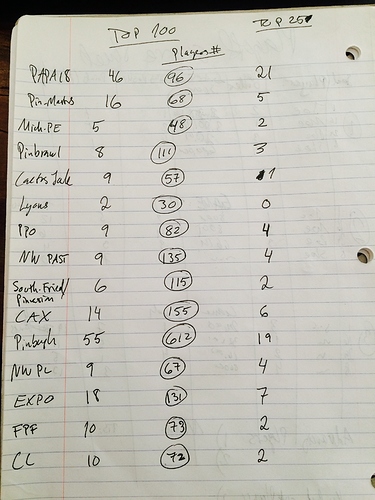 Both are crazy difficult, but I’d say PAPA, at least qualifying. While you might catch some lucky breaks in Pinburgh qualifying (from seeding or the games themselves), PAPA A qualifying seems to be as unforgiving as it gets. It also depends who you are. For top 25 guys, PAPA might actually be easier because you are someone who consistently plays at that level. At Pinburgh, even if you are at that level, you can still get unlucky on a bunch of EMs and plunge a bunch of house balls even if you play well on the moderns, and not even qualify.

What would be really cool is a breakdown of the Pinbugh qualifying by era. Who got the most points for EM, oldSS, newSS & DMD

That would be cool. It would also require game-by-game results, which would be just as cool. The speed of the event doesn’t allow us to enter those results in real time, and then there’s a pile of almost 2000 score sheets that nobody particularly wants to deal with

Long term it will be amazing if and when Pinburgh score entry is done by the players, because then we’ll have all that extra information.

Another way to look at the relative difficulty of a tournament is through the field of players in each tournaments. Glicko ratings can be used as an indicator of skill for each player. Here is a density plot of player ratings in 4 tournaments, PAPA, PInburgh, CAX, and INDISC (All 2015). I can’t add city champ because it hasn’t been added to IFPA yet. (All this is relatively easy to do if you use the IFPA API) 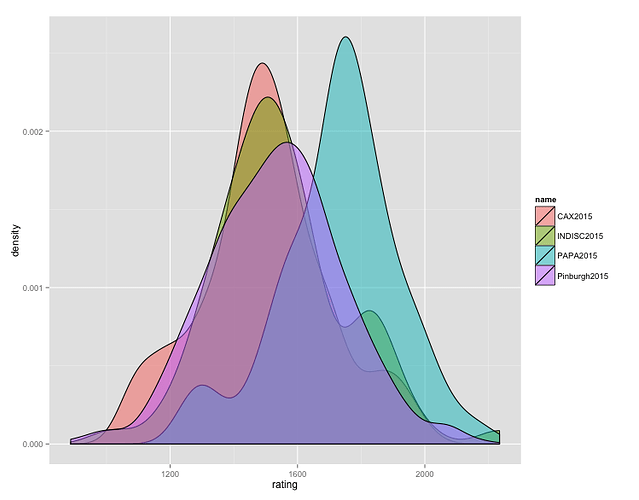 So, based on the skill of the players in the tournament, PAPA is clear and away the hardest tournament. By a full standard deviation.

Actually, I was wrong. City Champ is on IFPA. Holy crap that was fast. I was just watching it the other night !!

Here are the plots with the original question posed by @JimiWolf . (Also, super job at City Champ the other night! I enjoyed watching the broadcast) 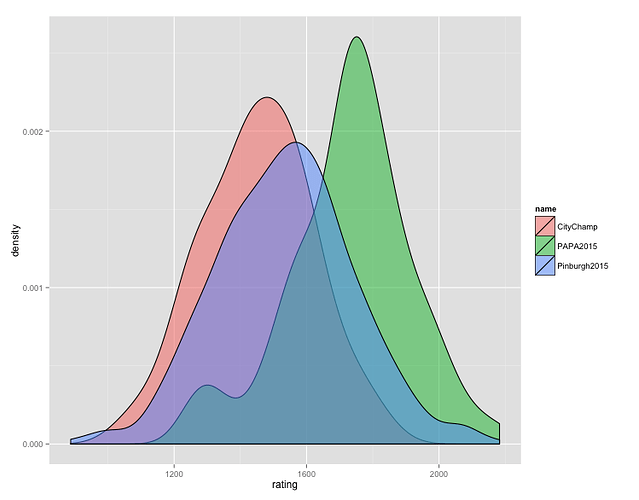 Throw IFPA12 in there. That’s been the toughest field for any IFPA so far … Until the next one 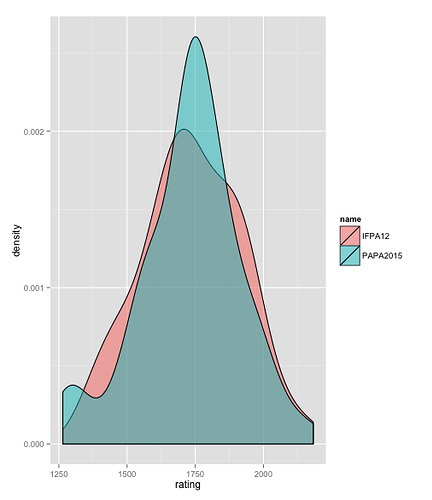 PAPA2015 and IFPA12 are actually very comparable. Although, IFPA12 was a smidge harder (0.04) standard deviations.

I feel like there’s something to be said for the difficulty of the event as it compares to its size, too. PAPA may have a stronger field but to win the tournament may actually be more difficult at Pinburgh.

Regarding the size of the playing field, this reminds me of what people say about winning the World Series of Poker. The number of players has just become so large in the last 10+ years that even the best players in the world have trouble cracking the finals. I would attribute a lot of that due to the larger luck factor in poker than pinball.

Also, please excuse me for sticking my B- math minor nose in the PhD level discussion!

Better hurry up … 15 more days until we nuke that shit

Tournament size is something that is definitely overlooked in the analysis above, and its kind of bothering me. If we were to take IFPA12 or PAPA2015 and clone all the players in the tournament, such that this new hybrid tournament had the same rating distribution, the above analysis would say they are equally difficult. We know this cannot be true, because beating Elwin is one thing, beating Elwin AND his clone is another matter entirely. I’m going to think about this more over Christmas vacation…

The Lyons Spring Classic that year was pretty nuts because of IFPA12: http://www.ifpapinball.com/view_tournament.php?t=6550#results

Somehow you missed Louisville(LAX) last year. Not a huge field, but with it being one week before PAPA many of the top US and European players were there. I think I remember 8 of the top ten players in the world were there, as well as many top 25’s.

Somehow you missed Louisville(LAX) last year. Not a huge field, but with it being one week before PAPA many of the top US and European players were there. I think I remember 8 of the top ten players in the world were there, as well as many top 25’s.

Long term it will be amazing if and when Pinburgh score entry is done by the players, because then we’ll have all that extra information

I sincerely hope this is on the long term radar! I have talked endlessly with people about wanting access to this kind of data set from Pinburgh.

It is, but it’s also a potentially event-breaking problem. If people can’t get on the Web with their phones to record scores, doom. If Pinburgh adds kiosks for entry but there aren’t enough, doom. If people type in their scores wrong and it affects the standings, doom. The instant transition that exists now from “last match just ended” to “next round is ready” would be extended by having to type in a lot of information… more doom.

One hybrid is for people to report individual game positions instead of group totals, but even that has the same types of failure points. I feel this is something that needs to be done, successfully, at a different event, before it is used at Pinburgh.

I have been through a few of those scenarios while thinking out how it might work. And yes. Many points for DOOM.

There would need to basically be a kiosk at every bank, with scores verified by everyone in the group. Even then, it does add to the time signifcantly. 60 kiosks is a lot.

Kiosks break down: doom. The simplest doom is the invalid score doom, though, with people coming up after the fact to dispute – that means you’ll need to do a paper backup copy anyway, and if you’re doing that, you might as well just use the paper copy as your score sheet.

Tried OCR tools in the past to read the scores, without much luck. One other possible option is “bubble sheets” (Scantron) but that brings all sorts of other potential doom scenarios.