Giant bomb discussed Esther’s win before reported on Deadspin etc. on their 5-9 podcast, so I wrote them an e mail providing a few more details, which they discuss 2 hours and thirty minutes (34 minutes, I believe) into this link.

In general, they thought Pinball streaming might benefit from game sounds, plus some sort of race to an objective format, to make the streaming more popular for a wider audience.

Is that Aunt Esther?

There is something beautiful about the ironic juxtaposition of 4 nerdy guys who record themselves talking about video games in a 2.5 hour video every week asserting that pinball is not interesting enough.

I’ve been saying for years that the influx of gamers into pinball have been nerding up our hobby. I’m glad they’re seeing the light and all, but I miss the days when pinball was a little more seedy. When guys with leather jackets were kicking ass and taking names. 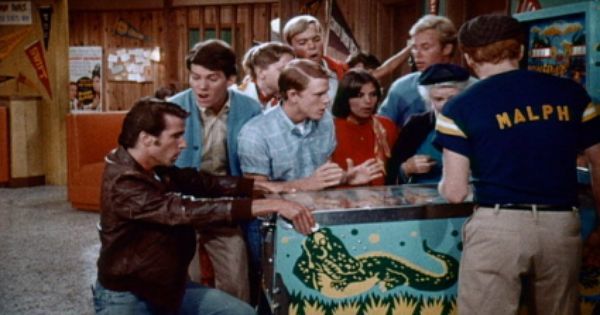 Wouldn’t you be crowding around too if some seedy dude had somehow time-traveled more than a decade into the future and returned with this incredible technological advancement of the familiar flipper game of the mid-1950s?

Something something Fonzie rolling tap pass.