I’m interested to see what kind of creative flyers folks are making to advertise for their tournaments and leagues. If you have some cool flyers, please post them here!

For the Space City Pinball league, I’ve opted to photoshop old b-movie posters. I think they work pretty well! I’ve also made them fairly generic, so if anyone is interested in using these for their local events, I’d be happy to share the photoshop files with you.

Looking forward to seeing what everyone else is doing! 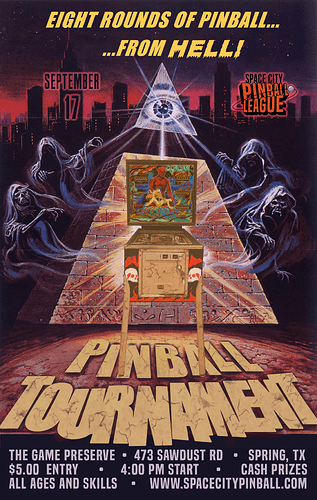 This one is from “City of the Walking Dead” 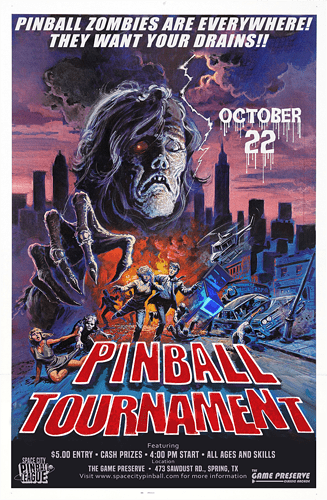 You forgot to mention you only win if you make it to 5K drops!!! 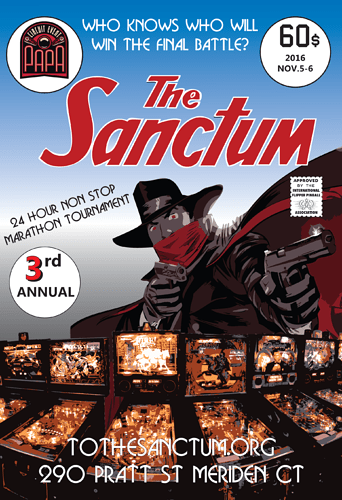 Will be printing off a small run of these for sale at some point. I

Get ready! I’m posting all my Babes in Pinland flyers from the last 3 years. We have missed quite a few months though, and I might have some saved on my home computer, but I’ll post what I’ve got as of now. These were all made by Skill Shot’s own Brad Hayden. He does a fantastic job. 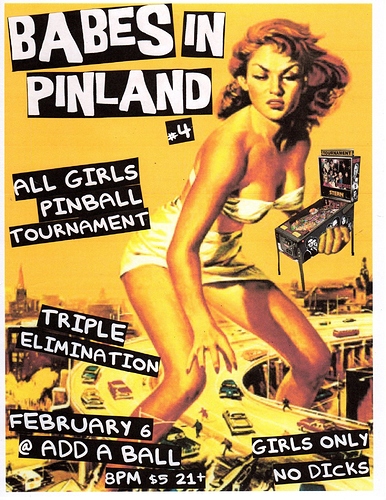 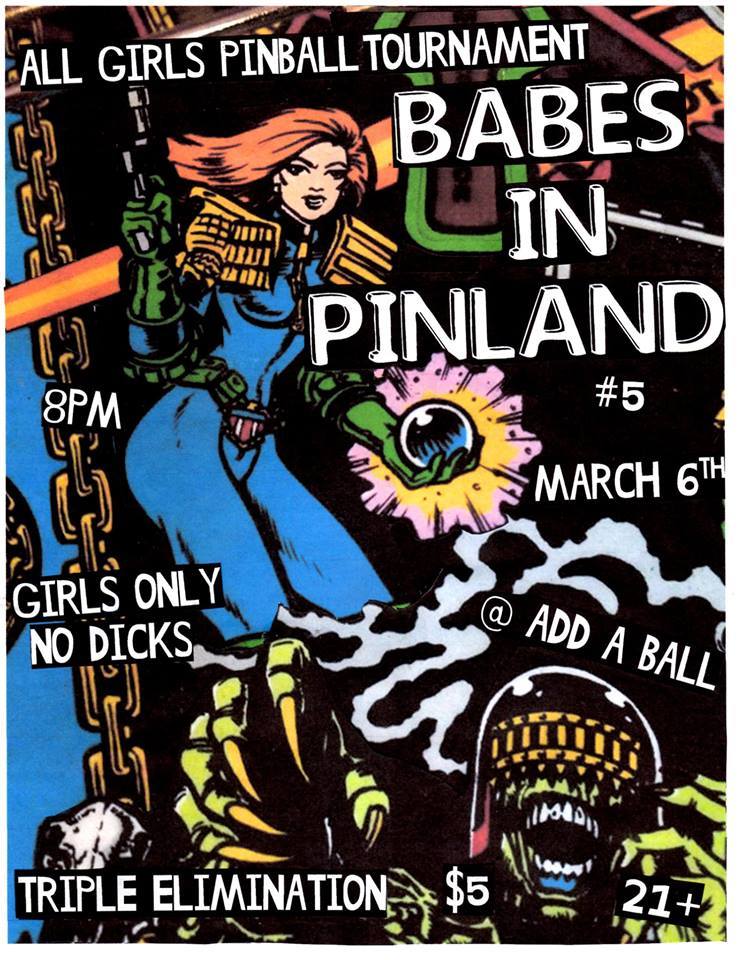 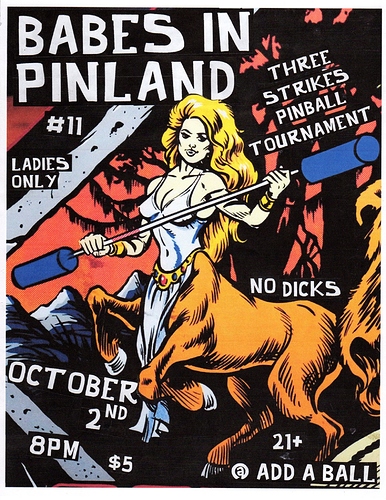 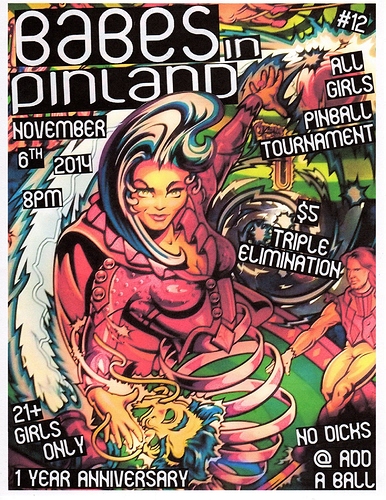 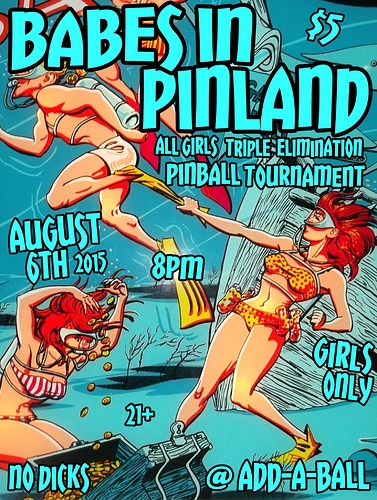 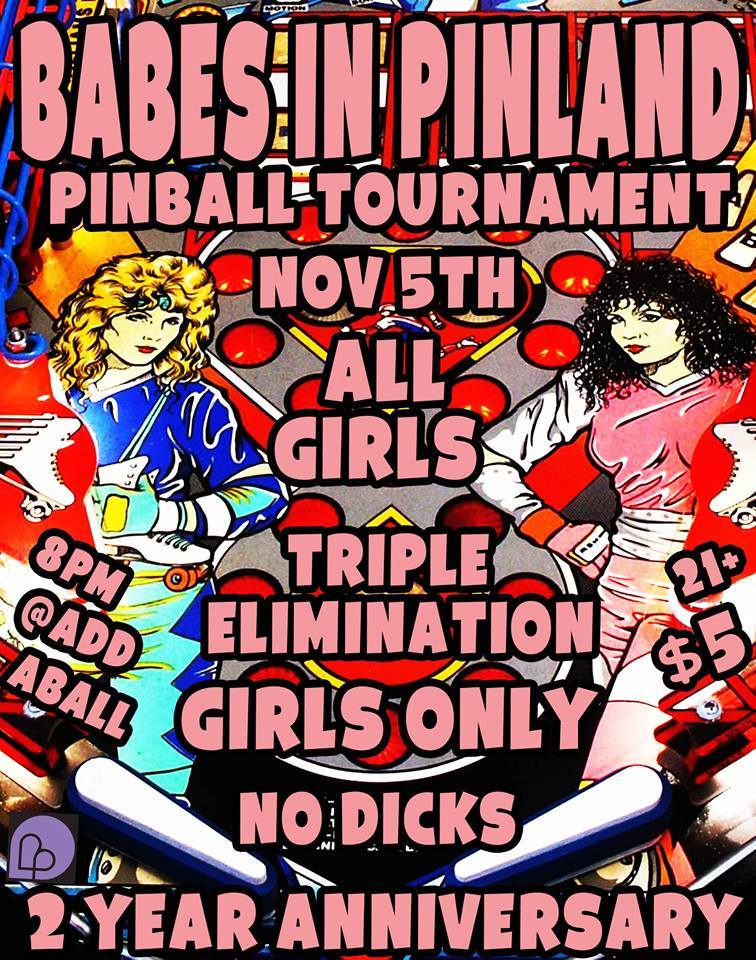 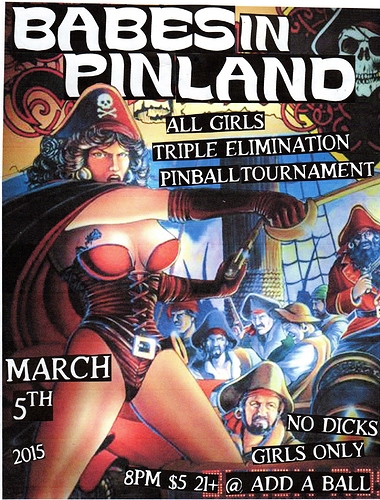 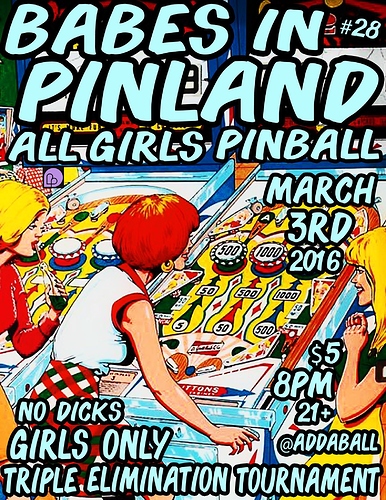 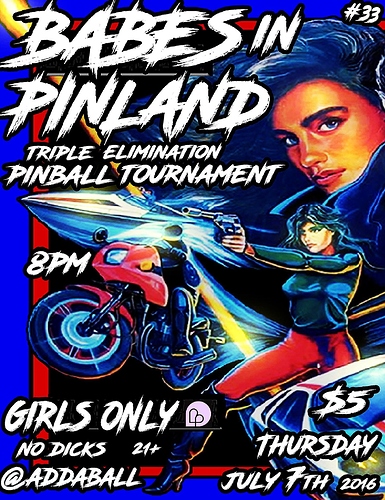 I get the intention behind “no dicks” but I can’t help but wonder if this is discouraging trans women from joining a women only event. I love the posters otherwise!

I know, I know. I’ve been down this road before. As you said, you get the intention: don’t be a jerk. I’m extremely connected in the pinball community and have made it overtly clear that anyone who identifies as a woman is welcome to these monthly tournaments. I’ve done advocacy work for both women in pinball, as well as trans acceptance and hope that anyone who is aware of these events understands that trans people are welcome. The unfortunate fact of the matter is that there are not many trans people into pinball in Seattle. That being said, were anyone to have an issue with those two words on my flyer, I would hope to hear from them directly. If you’re interested in trans acceptance, please feel free to read this interview I did with a local musician / artist for Razorcake Magazine: http://archive.razorcake.org/interviews/l-henderson-interview-trans-punk

I think this is such an important part of the conversation when it comes to women’s-only leagues (and I recognize that “Tournament Flyers!” is not necessarily the most on-topic space to have it, but at least I’m including a poster in my post!). Belles & Chimes PDX’s poster, which I love and which was designed by Portland pinballer Chad Darnell, whose wife and daughter are in the league, says “Women Only” prominently across the top: 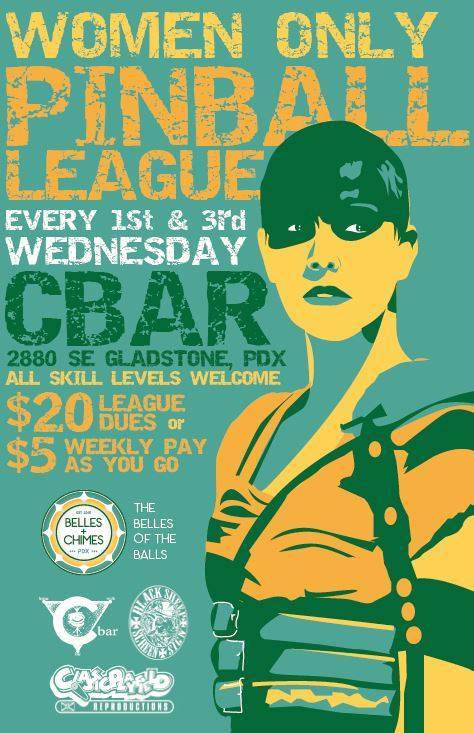 I’ve heard from more than one trans person that they felt excluded seeing that language, like this league was not for them, which is definitely not the intention! I’m wondering if there’s a way to avoid coming off as trans-exclusionary while also not having a debate about the existence of the gender binary on a poster.

I’m definitely interested in hearing the feedback on this one. Saying “women only” and not going into greater detail about what I mean by “women” was a purposeful choice. Calling out cis, trans, binary, self-identified, etc. seemed like it would highlight some sort of divide between “types” of women when they are ALL women. Period. No categories or labels needed. I’d love to make it clear that we’re all-inclusive without a lengthy explanation.

And here are a few tournament flyers, as well. 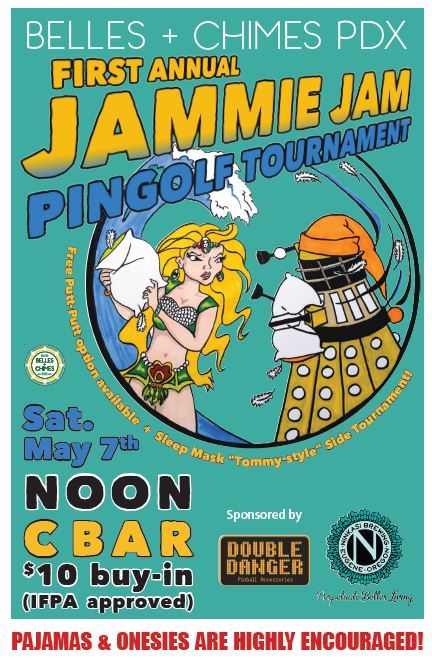 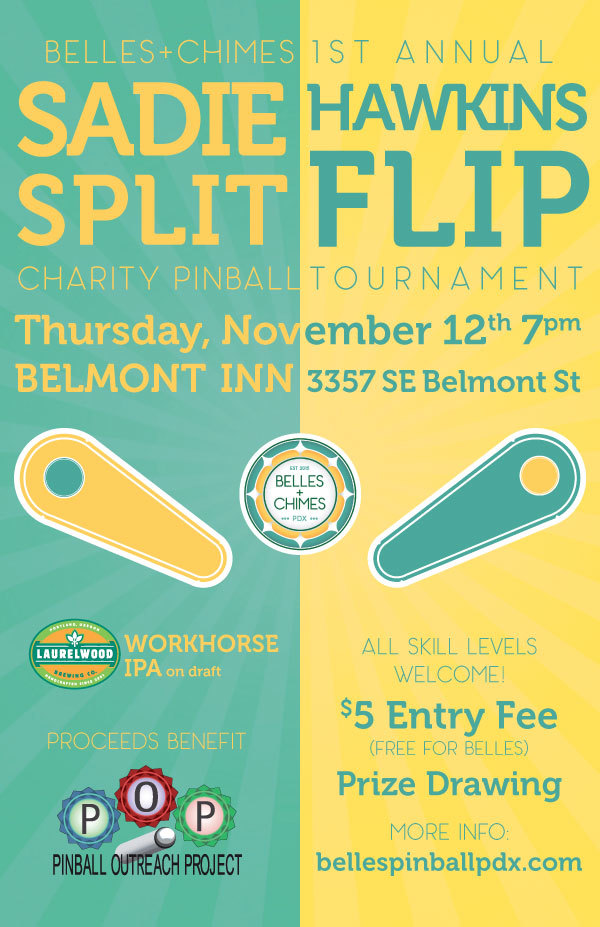 I showed some of these flyers to a trans friend and asked their opinion. He reminded me about the slogan Belles&ChimesCLE use: No dudes, no 'tudes!

He reminded me about the slogan Belles&ChimesCLE use: No dudes, no 'tudes!

Hey I suggested that! Glad it stuck.

I know what you’re saying and I don’t want anyone that identifies as female to feel excluded. Though I wonder how much of that is on the trans person. Like, would they feel the same if it said “No men”? A lot of how things are interpreted hinges on where people are in their own headspace. If they are constantly told they’re not allowed in certain places, it’s obvious that even the most welcoming spots would keep them away. Whereas a more outgoing / confident person might not bat an eye. Maybe my chosen verbiage isn’t exactly inviting, but thus far I haven’t gotten any complaints. I’m willing to change it and/or have a conversation with someone if it does bother them though. Some three years ago Razorcake realized how heavily male skewed the magazine was, and they put a moratorium on accepting any more male contributors until a gender balance was struck. Now in every issue we have a blurb that says “If you are a woman, or identify as one, knowledgeable about DIY punk, and able to meet deadlines, please drop us a line,” and so on. That’s certainly helped in the mission statement. Maybe it’s a model worth following. Just sorta brainstorming here.

I’m willing to change it and/or have a conversation with someone if it does bother them though.

Personally I feel like being proactive and making the change yourself is a better option. Rarely do marginal groups want to constantly explain that they’re being excluded, or discriminated against. For point of reference, when I showed the “no dicks” flyer to my friend he said it was incredibly TERF. (Trans-excluding radical feminist) It’s possible nobody has brought it up because they already felt unwelcome, why drag folks that already dislike you into a debate?

I personally like “women only” because that means anyone who identifies as a woman without forcing a specific definition on their identity (as long as it’s in good faith, but I’m fairly certain cis dudes who say “Well, I’m going to wear a dress and participate” already know they’re being shitty). I do agree with @ChubbyGoomba that “no dicks,” though obviously a cheeky joke about not being an asshole, comes off as focused on anatomy rather than identity and there’s a bad history there within the trans community and its intersection with feminism.

Why are you assuming that people already dislike me for two words on a few flyers? You don’t know me, or my scene, and I am confident that this is not being seen as exclusionary by anyone who knows about it. I go out of my way every month to get as many women (which includes identifying as) involved in these. It’s never been intended to drive anyone away. I’m feeling ganged up on for two words that are not being taken as I meant them. I guess I just have to stop using them or I look like an asshole. 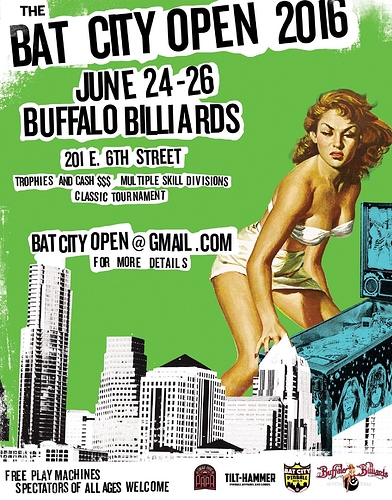