This (temporary) arcade received about 45,000 visitors per day.

Now, my job doesn’t really allow me to leave southern California, so I don’t know how much attendance there’s been for other events with bunches of arcade games, but this was definitely one of the most-attended temporary arcades I’ve ever been to: 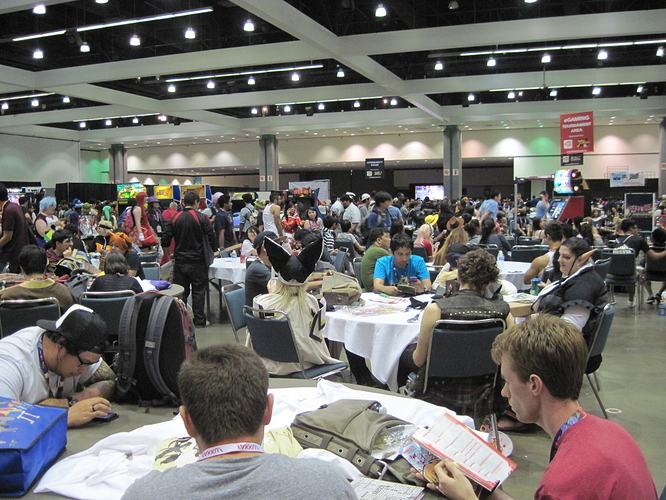 This photograph was taken at approximately 8:30 PM on July 5th, 2015, in the Los Angeles Convention Center. In other words, this was the Entertainment Hall of Anime Expo 2015. The room is traditionally dedicated to gaming of all sorts, with arcade games being at the very front of the room. This year, there were about 50 to 60 arcade machines. And, if you’re wondering, yes, there was pinball. It was the first year I saw pinball there, and there was one machine: Terminator 2: Judgment Day. Unfortunately, because it was played so much, it broke down early into Day 2 and couldn’t be repaired for the rest of the event. (I think it had a different owner than the rest of the arcade games.) For that matter, the change machine always required someone nearby as that machine was used so much that it broke several times a day. A big hassle, but the business that rented out these arcade machines walked away with literally tens of thousands of dollars by the end of the convention. Every 15 minutes as I observed, someone would go out to one or two of these machines and empty a filled-up coin box.

I would love to see more pinball at Anime Expo. I think that if an operator were available for all four days that Anime Expo is open to the public, they’ll get a lot of play too and thus a lot of money (though admittedly, having to constantly fix these machines is probably quite tiresome). Anime Expo 2015, this year, saw a record turnout: about 90,500 unique visitors and 260,000 turnstile visitors. (“Unique” refers to the number of admission badges used; “turnstile” refers to the total amount of people who walked into the building over the four days.)

A potentional problem though: There are only a few pinball machines whose theme would appeal to anime fans. (I’m actually pretty surprised none of the pinball makers in the 90’s made a Dragon Ball Z theme or a Sailor Moon theme, for instance, even though both are seeing quite a revival presently via the theatrical DBZ films and the Sailor Moon Crystal remake.) The ones I can think up that CAN appeal to anime fans are as follows:

For the record, there is almost no crossover whatsoever between anime fans and kaiju films (except the recent live-action Attack on Titan movie), so I wouldn’t recommend Godzilla. Most of the attendees also skew rather young, so stuff like Lord of the Rings would be before their time.

As an attendee for Anime Expo for at least five consecutive years now, I would love love LOVE to see more pinball there. Please!