Yeah now that I re-read this I’m following what you’re saying.

Mine has what looks to be a flipper hop on the right side. Not sure I’ve seen it at all on the left.

The slings to flipper guide arrangement seems identical to AFM and I do think the sling is further away from the flipper lane guide.

The slings to flipper guide arrangement seems identical to AFM and I do think the sling is further away from the flipper lane guide.

Code .84 just dropped. Damage kills added to the demogorgon and lots of scoring balances were the major highlights I saw from a quick scan. Can wait to try it!

I know this was asked earlier, but didn’t see a response. Is Upside Down completely random, or can it be standardized? We have our launch party tomorrow and I’d like to standardize it if possible.

On a fun side note, we don’t even have to enable virtual locks since the plunger on the lock exploded and flew out onto the play field the other day.

The upside down is based on switch hits in competition mode. I’m almost positive. Stern won’t confirm this though. They they just say in comp mode it’s the same for everyone.

So at the launch party I would take trips into the pops regularly if They are lively.

I have keys and the operator allows me to change things during events, my problem is that I never know what competition mode does to a game so I have no way to convey that to participants. I can’t find a list anywhere, so I have always stayed away from it in the past and went for individual adjustments for Extra Balls, Virtual Locks, etc.

You’re confusing that with competition install. All competition mode ever does is take away randomness. Mystery and upside down. That’s it. That’s what it should be. Code is still early so that could not be true. Should be able to test it before the event.

Also if you do comp install and want to know what that changes, do the install then go through the menus and see what is labeled as installed and not factory.

Added a square of beer seal on top of the stock grommet and that seems to have fixed the sloppy right ramp return feeds to the right flipper. Hopefully this helps for your guys too. 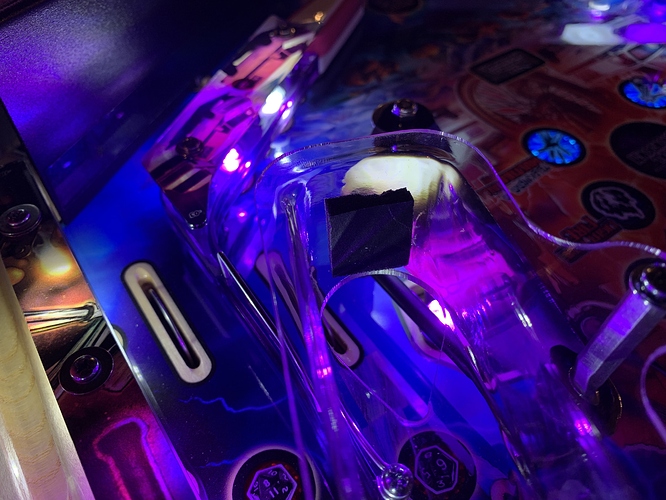 We have been getting a bunch of stuck balls on our Premium. If you shoot the left inner shot next to the center targets or sometimes if it dribbles off of the gorgon, it’s getting stuck just on the left side of the gorgon mech I think. It’s really hard to tell what it’s getting hung up on. Anyone else have any similar issues?

Check the one way gate that faces away from the Demo. Most likely the arm of the gate came out. If it keeps happening and you cannot get it to stay, take it out. Doesn’t really seem to be needed.

seems to have fixed the sloppy right ramp return feeds to the right flipper.

Now that you’re getting clean feeds from the ramp return, are you seeing a difference between those and the straight inlane feeds?

Don’t remember ever having an issue with those.

Check the one way gate that faces away from the Demo. Most likely the arm of the gate came out. If it keeps happening and you cannot get it to stay, take it out. Doesn’t really seem to be needed.

Same thing happened with mine. I bent the gate and it stayed for less than a day, and then game out again. Then I removed the gate. Doesn’t seem to be affecting much.

Without the gate, I have seen one or two times where a shot in that area can start a Demogorgon mode, though I don’t recall if that requires the mode to already be ready up the middle…but I would assume so.

Same thing here also. I bent my gate and so far it’s been fine at the location on the busy weekend but we’ll see. PITA to get to the thing though. If it keeps happening it will come out I think.

How on earth did you get to it?! Lol this is nuts.

Lots more room to work if you take the half of the ramp off that starts after the lock post. Should only be 3-4 screws.

Yep, I took the ramp off and then the plastic that kinda sits above it. I ended up taking more then that off I think as I couldn’t tell where the gate was supposed to go until I got it all apart but if I had to do it again, knowing where it fits, it would be a little easier to get to.

This happened to the one at Leagues last night. I was able to wiggle it out using my Titan pinball magnet, which unfortunately broke when I was using it. Anyway, I bent the gate the best I could and got it back in there. We’ll see how long it lasts.

So I think we discovered a new (super?) skill shot at league last night, but the payoff is so big, I’m not sure it’s not a bug. Short plunge, shoot right loop and EB is lit at the mystery shot. I thought I saw somebody do it in league accidently, so I tried it after and it worked for me and the other two players I was playing with. You could even get a few sling hits first and it would still give it to you. Tried it again on ball 2 and it didn’t work, although some sort of award may have been given. Pro, latest code. Is this coded, or is a node board losing its mind?