Had a bug in 1.02 in which the smart missle was qualified, call out given, but up post never triggered. Just saw it once.

If smart missile didn’t actually start pretty sure that means that the ball missed the inlane switch.

Since updating to 1.02 the arrow at the Control Room only lights green. In test Blue and Red don’t work at all, meaning it is not lit during Trex or Chaos MB among other times.

Is this code related or is there some other fault?

Some other fault. Mine works fine for blue and other colors.

When starting Invalid Frenzy via smart missile, nothing is lit for the first few seconds, while it goes through the opening audio choreography. I assume the ball is normally held during this time when starting it the legit way, which I’m not sure I’ve ever done. I just hope I’m actually being awarded stuff even though nothing is lit.

Oops, I misstated this issue. Things are lit, but don’t seem to respond to hits during the opening sequence. They could very well be registering in the background, not sure without glass-off testing, which would cut into my playing time.

Another bug/feature - if you get tilt warnings while in the Control Room selection, you get Virus Attack (presumably whatever the first option is).

Yep this has been in since the game has been out. I don’t think they have plans to fix this. 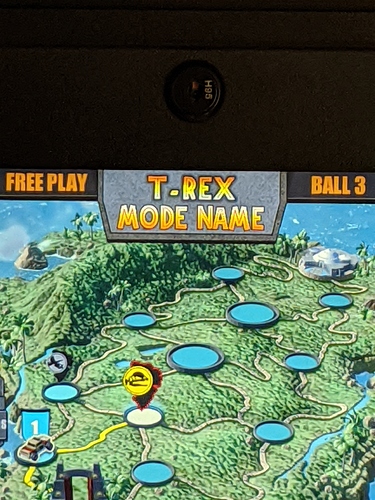 This was with the adjustment for not starting TRex modes on hurry up. Mode that followed was TREX CHASE.

Another screen display bug: there are times when the T-Rex mode timer is still shown on the screen after the mode is complete. It’s been in gray and not actively counting down.
It eventually goes away after starting other things. 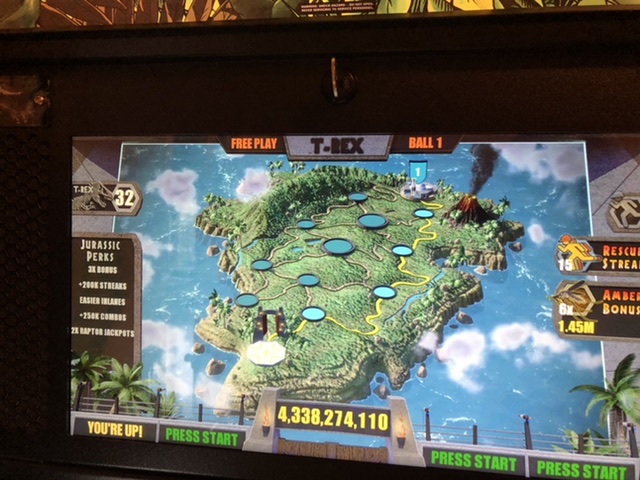 Yes, I’m curious about the path to that sort of score - fantastic multiballs? Easily beats my GC to date.

Haha. Not intended, but thanks! I think that one may have been one where I was focusing on Pteranadon, but had mistakenly not taken the T-Rex paddock path. And I’d been the beneficiary of likely two-three EB’s at that point.

Yes, I’m curious about the path to that sort of score - fantastic multiballs?

The two paths to huge scores that I’ve found:
(1) My best at 8.7B was simply playing through the whole game: completing modes (getting fossils), going through all paddocks, keeping a long rescue streak going, good bonus, EB’s, and big payoffs at Visitor Center, Escape Nublar, and When Dinos Ruled the Earth. I also had an epic Secure Control Room that game of nearly 600M.
Rough point estimates (at base value – no 2x PF):

(2) Grinding Pteranadon modes to build your Pteranadon multiplier (without collecting) for an eventual massive collect. I believe my max is around 3B. @kdeangelo has gotten a 5B Pteranadon collect.

What EB settings are people using on JP? Not getting any high scores close to that. I have mine set to just one to play a little harder. In competition, it is going to be set to zero.

For playing at home: factory settings. Lots of EB. See the rulesheet.

Made some additional edits, perhaps most importantly including an additional listing of DNA Combos that are grouped by the initial starter shot, rather than the order as presented in the Instant Info. I believe someone mentioned it in an earlier post, but it’s so much easier to intentionally pursue them and keep track of them by their initial starter shot.

This is very useful. My other beef with the instant info is I never remember if white or yellow means completed.

Have we determined what the Triple Super Skill Shot does yet?

It makes goats appear on the screen.